"Look I made a hat/Where there never was a hat"

(Act 1, Sunday in the Park with George, Stephen Sondheim)

"Why did I volunteer for this?!" I repeatedly asked myself, Monday morning, while tearing out the seam, which I had made with stitches that were too small.

Was I caught up in the heat of the moment?  Was it because nobody else volunteered right away?  Certainly, someone would have done it eventually.  Really, I didn't even want to be working on props, but there were lots of women carrying in costumes so I thought that the costume committee, where I really wanted to help, didn't need any more people.

I think it was the lips.  There were these big lip patterns that needed to be made.  Trying to get the lips right - glue them on the backing, get all the decorations in the right places - is not my sort of thing to do.  A nice sewing project, on the other hand, was closer to my thing.  I could avoid doing the lips by volunteering for the sewing project.

Oops! - except that it's been years since I've sewn anything that wasn't a repair.  I used to sew a lot before older son was born, less and less the older two arrived, and almost not at all since younger son came along.  I never saw the point of sewing for them because they'd grow out of it too quickly, and I was much better at finding fun clothes at yard sales and consignment stores.  I didn't care about clothes for me enough to keep trying.  Since dolls don't grow out of their clothes, daughter and I did start an American Girl pattern together, but the project got lost in her room.

Another part of why I stopped sewing was because 1/3 to 1/2 of the things I tried making came out a size too small.  It wasn't wishful thinking - I went by measurements - but I thought that I was no good at cutting, sewing, and doing seams.  I mentioned this to one of the women sewing clothes in the costuming area, and she said that some companies' patterns run small and you have to buy a size larger. 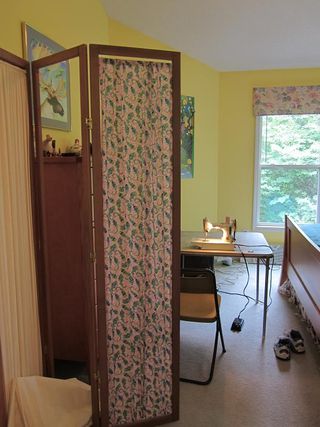 Getting back to lip avoidance, there I was, on Sunday, with a large screen which needed to be redone in pink, girly material for Kim's bedroom in the upcoming production of Bye, Bye, Birdie, and a bench which needed a skirt.  There was also an unfamiliar sewing machine and a busy hallway to sew in.  I quickly said that I would take these home to do on my own machine.  Having promised to do my duty, props-wise, and having avoided the cutting and gluing (I've mentioned that I'm not crafty), I went off to see how the costuming committee was going.  It turned out that most of the women bringing clothes in had gone on to other projects, and I spent the afternoon happily helping to organize, repair, and adjust costumes.

I thought I'd be done with the screen and the bench in a day, maybe two.  I didn't realize, in the heat of the volunteering moment, that the material on the screen had to be pulled tight on two dowels (top and bottom).  With my lack of confidence at cutting and measuring, I wouldn't have volunteered had I realized that!  The first few hours of Monday were spent in extreme frustration.  At one point, I thought I'd cut the piece too short, hence the seam ripping (it turned out that I hadn't).

But the first panel turned out really well!  It fit!  I cheered and clapped, which brought younger son and dear husband (who works from home now) to see.  I took a picture (above) in celebration. 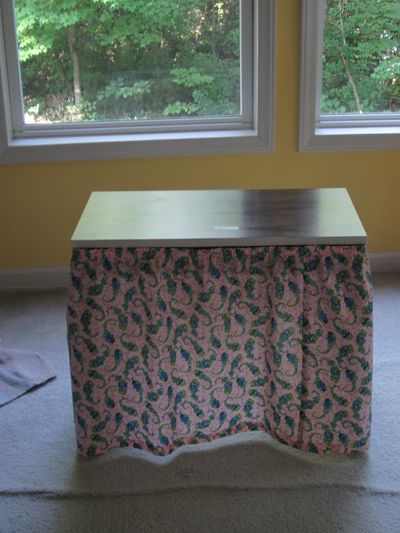 The second panel only took an hour.  The next day - two panels and part of the bench.  Unfortunately, errands and physical therapy intervened and I didn't finish until Thursday afternoon.

I'm really pleased at how they turned out.  If I get a chance to take a picture of them onstage, I'll post it.

Although it was really frustrating at first, I ended up really enjoying working on the two projects.   It was different than sewing from a pattern.  There, you're sewing something that many other people have sewn, or will sew. Here, I had to figure it out for myself.  I was making something unique for this particular production.  Daughter has really gotten into doing tech for shows this year so she understood.

In Act 1 of Sunday in the Park with George, Georges Seurat has a song about painting a hat.  Except that, of course, being a Sondheim musical, it's not just about painting a hat.  It's about why he paints, and how he relates (or doesn't) to the world while doing so.  He ends the song with his accomplishment:

Look, I made a hat!  Where there never was a hat.

I understand that more now.

[Note:  This is why I've been missing.  Days have been spent sewing, running errands, etc., and we have rehearsals every evening.  I'm exhausted by about 10 pm. (when we finish dinner), but I'm having a fantastic time!]