Reactions to Susan Boyle's Performance AND "My Life" by Iris DeMent

I already posted a link to Susan Boyle's wonderful performance on YouTube.  I've continued to read blog posts and articles about her and people's reactions to her performance.

I'll start with my own reaction.  Yes, I could tell that she was not what the crowd would consider "star material."  To me, however, she looked like a fun person to know.  She was confident, joked about herself, did a little hip swirl - she seemed quite real, quite there.  She wasn't putting on some facade and trying to impress.  She seemed the sort of person I would like to talk to. 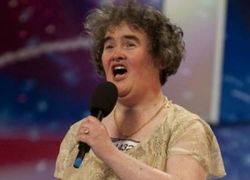 Then she sang "I Dreamed a Dream," and I got teary.  Why (besides the fact that that song makes me teary anyway)?  Because she confounded the expectations and because she was living her own dream.

I had to go back to think about exactly what my reactions were because of this comment from my friend, Emily:

Does this "story" teach that we shouldn't judge a person's potential for talent based on appearance or does it actually reinforce the notion that someone who looks frumpy couldn't possibly have a star-quality singing voice? In other words, if it wasn't a big deal that she could maybe sing, then why is it such a big deal that she can sing? Am I missing something? Or is the story just about the viewer feeling superior to the live audience? Or is that just the video's editor playing up audience reactions for effect?

Some people in the audience were sneering.  For instance, consider the teenager rolling her eyes for all of Britain (and now all the world) to see?  I would think that, at this point, her parents would want to crawl under a rock.  However, I don't really want to believe that the whole audience was against her because I don't want to believe that that many people could be so shallow!

Older son and I were talking about the audience reaction the other evening.  If she went out with a violin and said she wanted to be the next Jascha Heifetz, most people wouldn't have the same reaction.  She'd be considered an "instrumental geek," who was too tied up in her art to worry about appearances.  Singing seems to be different, however.  There, all of a sudden, you have to be conventionally beautiful.