Kristin Chenoweth is nominated this year for On the Twentieth Century.  She won a Tony in 1999 for playing Sally Brown in You're a Good Man Charlie Brown.  Here she's singing "My New Philosophy" along with the cast singing "Happiness:"

What musical should I post for the last one?  One I've been in?  One of my other favorites?

Or one of my all-time favorites!

I've seen it twice - both college performances (Duke in the early 80's and Elon University last year), and both lots of fun.

It's hard not to have fun at The Mystery of Edwin Drood.

Older son and I both used songs from Drood when we auditioned for Les Misérables (posts about the auditions here and here).

Annie was one of the first Broadway musicals I saw, and one of the first where I memorized the whole cast album.  Here's the performance on the 1977 Tony Awards (Easy Street is my favorite number in the musical):

Tony Awards Countdown (3 Days): "Sunday" from Sunday in the Park with George

I could write a whole post about how creativity is explored in this musical, but I already wrote two:  By the blue purple yellow red water, and Meme/Saturday Fun Songs:  "Finishing the Hat" and "Putting it Together" sung by Mandy Patinkin from Sunday in the Park with George.

Tony Awards Countdown (5 Days): "Corner of the Sky/Magic to Do" from Pippin

Pippin is one of my three favorite musicals.*  When we lived in upstate NY in the mid-70's, I used to watch Ben Vereen in the Manson Trio in the ad for Pippin on a small black & white TV.  I loved that performance, Fosse's choreography, and Ben Vereen's dancing.  However, I wasn't old enough to see Pippin.

Until recently, Pippin was never revived on Broadway, and I haven't had the chance to see it at local theaters.

Two weeks ago, I finally saw Pippin.  I'd seen this Tony performance, and I wasn't sure what I though of this.  Would the acrobatics be distracting from the story?  They were different performers than I'd seen in the DVD of a 1981 performance.

I loved it!  I was caught up in the whole thing - it was beautiful, and funny, and totally engaging.  There was new choreography so it wasn't as Fosse-esque, but that's what happens with a new production.  They did keep Fosse's Manson trio choreography.

I managed to turn off my inner Ben Vereen after the first few numbers!

Manson trio from the Broadway production:

* She Loves Me, and The Mystery of Edwin Drood.

One of the best musicals.  We've recently seen Debbie Allen as one of our favorite judges on So You Think You Can Dance (starting again this evening).  Here she is with the cast of West Side Story on the 1980 Tony Awards.

Gregory Hines is one of my favorite musical theater performers.  I love his dancing and energy, and I wish he had been in more musicals.  He won a Tony for his performance as the jazz musician, Jelly Roll Morton in Jelly's Last Jam.

[Hat tip to Chris Caggiano at About Entertainment]

Tony Awards Countdown (8 Days): "I've Decided to Marry You" from A Gentleman's Guide to Love and Murder

The Tony Awards are a week from tomorrow so sites I follow have been showing different Tony performances.  I've decided to do a countdown - one performance a day until the Tonys.

I fell in love with this performance on last year's Tony Awards.  A Gentleman's Guide to Love and Murder is on tour right now, and it will be at DPAC in Durham, NC next October.

GENTLEMAN’S GUIDE tells the uproarious story of Monty Navarro, an heir to a family fortune who sets out to jump the line of succession by—you guessed it—eliminating the eight pesky relatives who stand in his way (each played by Tony winner Jefferson Mays in what The New York Times calls “the year’s greatest musical theater performance"). All the while, Monty has to juggle his mistress (she’s after more than just love), his fiancée (she’s his cousin but who’s keeping track?), and the constant threat of landing behind bars! Of course, it will all be worth it if he can slay his way to his inheritance… and be done in time for tea.

Earlier this year, they posted a video from a camera on Monty's forehead during a rehearsal: 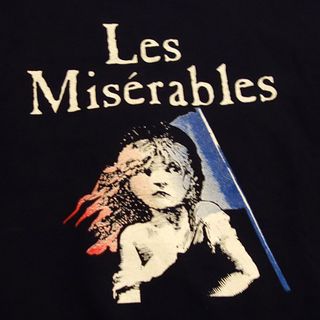 The Gallery Players' production of Les Misérables opens Friday evening in Burlington, NC.  It's going to be wonderful!  Here's the performance information:

Paramount Theater of Burlington
Feb.21-23 and Feb.27-Mar 2
Thursday, Friday and Saturday evenings at 8PM
Saturday and Sunday matinees at 2PM
336-222-8497 to reserve tickets (Call between 12 and 3pm or leave a voice-mail with information)

Here's the event Facebook page, with information and a great photo of the cast, and here's the Gallery Players Facebook page with some more photos.