Various scenes from our June trip: Virginia and Valley Forge 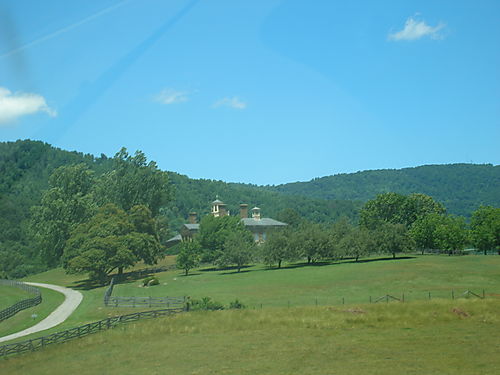 I love the rolling countryside of Southern Virginia (this was taken through the van window). 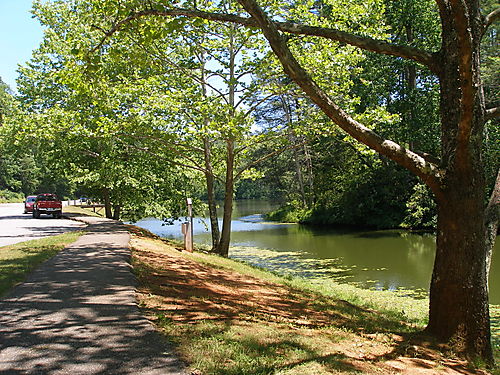 We had our picnic lunch at Otter Lake, on the Blue Ridge Parkway, just off of our route.  It's called a "lake," but you can see the other end of it in the picture.  It's really more of a pond.  The sunlight was beautifully clear because it wasn't very humid (unlike where we live). 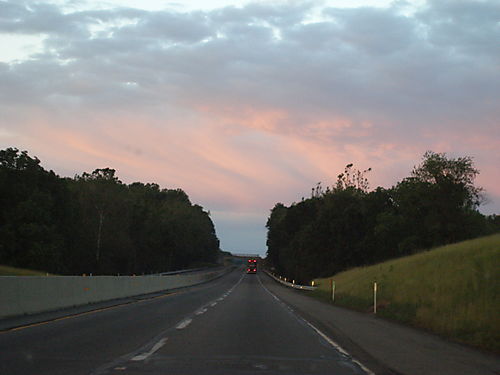 Sunset over the Pennsylvania Turnpike. Reconstructed cabins at Valley Forge National Historic Park. The ranger we listened to in one of the cabins told us about the role of women at Valley Forge (yes, they were th

ere, had jobs, and some eventually got army pensions).  They took care of the cooking, etc., so that the soldiers could drill.  She also explained,  among many other things, the purposes of stays (right).  Along with the obvious bra-ish purpose, stays, if tied tightly, provided back support for the heavy work that women had to do.  Poorhouses in England, at the time, had their major funding going to food, but the second item on the budget was for stays for the women - necessary for respectability. Prostitutes were the only women who didn't wear stays - the lack of stays made them "loose" (that's where we get the term).
I won't tell you all the interesting things we heard, but if you're in the Philadelphia area, I highly recommend Valley Forge! 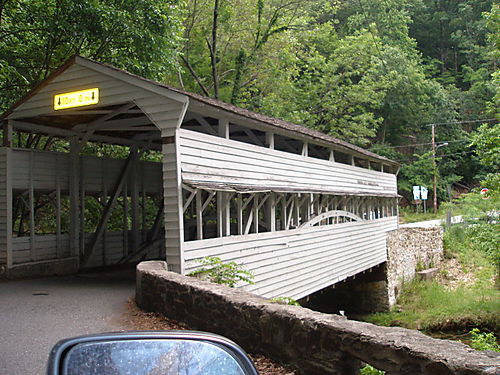 Covered bridge at the edge of the park. 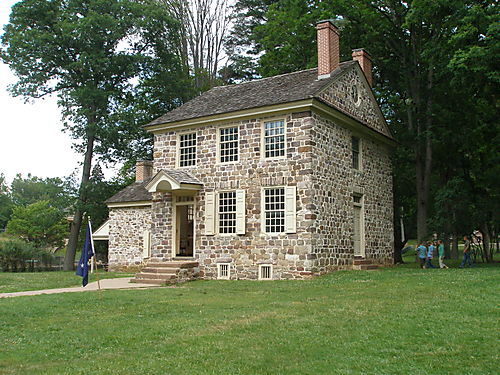 Washington's Headquarters at Valley Forge.  It is next to the site where the actual forge was located.  The owner of the forge, Isaac Potts, didn't want the colonial troops to store anything at his forge because he feared retribution by the British.  He was told that it was too out of the way for the British to bother (this was before the famous winter encampment).  He relented, and when the British did come to get the "rebel stores," they burned his forge.  He later asked the U.S. Congress for reimbursement, but "there is no record that he ever received it." 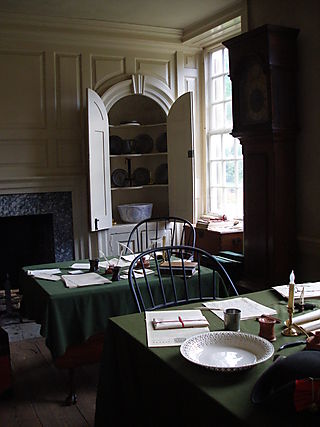 The aides' room in Washington's Headquarters. 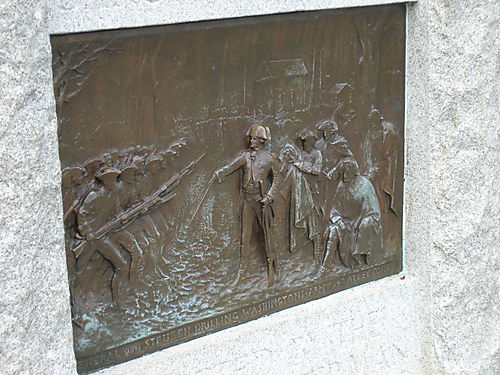 "General von Steuben drilling Washington's Army at Valley Forge"
We hear so much about the misery at Valley Forge that it's easy to forget that other things, such as military training, went on there.  Although the winter was difficult, of the 2,000 men that died there, 2/3 died of diseases such as typhoid and influenza - in the spring months.

General (and Baron) von Steuben trained the soldiers at Valley Forge and molded them into a more professional fighting force.  Von Steuben wrote to a friend that, in Europe, "You say to your soldiers, 'Do this,' and he doeth it; but [to the Continental soldiers] I am obliged to say, 'This is the reason why you ought to do that;' and then he does it." 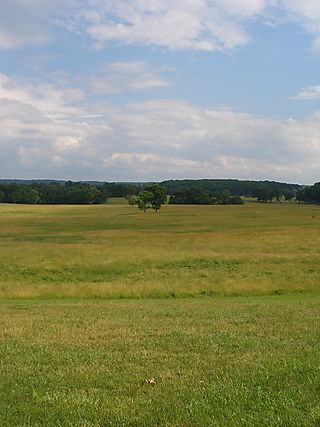 I didn't realize how beautiful Valley Forge would be.  Of course, at the time of the Revolution, this field was probably mostly mud from military drilling, but it's beautiful now.  You drive around it the entire time you're at the park. 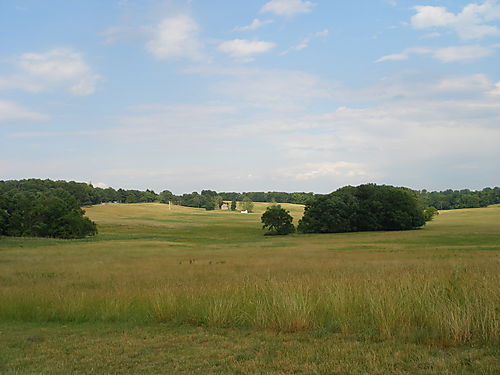 Another view of the field. 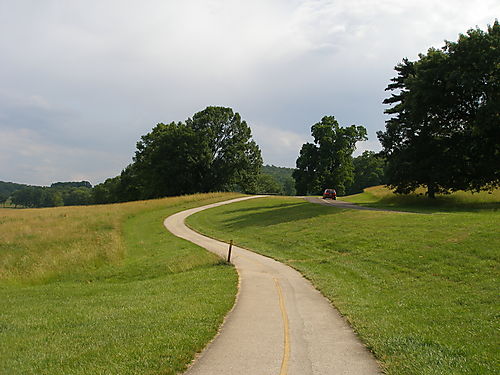 This walking/biking trail runs around the park next to the road, and it had been tempting me all afternoon.  It wasn't far until our next stop so I decided to walk (that's our van on the road).  Daughter's foot was sore so, unfortunately, she couldn't join me.  Of course, I realized that, if older son had been along (he stayed home for work and "Music Man" rehearsals), he would have walked with me... 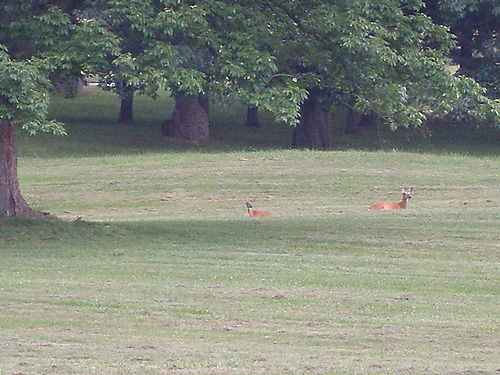 The deer there could care less about people. 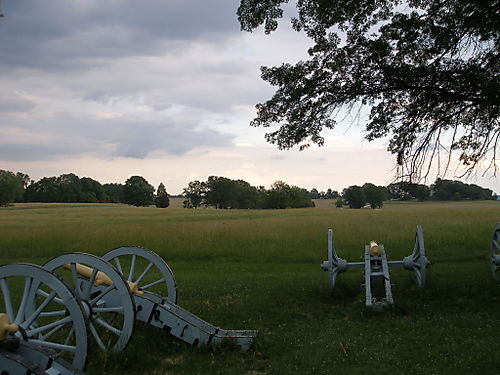 The artillery park was our last stop which was good since a rainstorm was moving in.

[Picture of stays from Antique Corsets]

Irena Sendler - credited with saving some 2,500 Jewish children from the Nazi Holocaust by smuggling them out of the Warsaw Ghetto, some of them in baskets - died Monday, her family said. She was 98...

Sendler was a 29-year-old social worker with the city's welfare department when Germany invaded Poland in September 1939, launching World War II. Warsaw's Jews were forced into a walled-off ghetto.

Seeking to save the ghetto's children, Sendler masterminded risky rescue operations. Under the pretext of inspecting sanitary conditions during a typhoid outbreak, she and her assistants ventured inside the ghetto - and smuggled out babies and small children in ambulances and in trams, sometimes wrapped up as packages.

Teenagers escaped by joining teams of workers forced to labor outside the ghetto. They were placed in families, orphanages, hospitals or convents.

"Irena was truly a noble lady and a great humanitarian who helped save thousands of children," said Stanlee Stahl, executive vice president of the New York-based Jewish Foundation for the Righteous.

Records show that Sendler's team of about 20 people saved nearly 2,500 children from the Warsaw Ghetto between October 1940 and its final liquidation in April 1943, when the Nazis burned the ghetto, shooting the residents or sending them to death camps.

"Every child saved with my help and the help of all the wonderful secret messengers, who today are no longer living, is the justification of my existence on this earth, and not a title to glory," Sendler said in 2007 in a letter to the Polish Senate after lawmakers honored her efforts in 2007.

n hopes of one day uniting the children with their families - most of whom perished in the Nazis' death camps - Sendler wrote the children's real names on slips of paper that she kept at home.

When German police came to arrest her in 1943, an assistant managed to hide the slips, which Sendler later buried in a jar under an apple tree in an associate's yard. Some 2,500 names were recorded.

"It took a true miracle to save a Jewish child," Elzbieta Ficowska, who was saved by Sendler's team as a baby in 1942, recalled in an AP interview in 2007. "Mrs. Sendler saved not only us, but also our children and grandchildren and the generations to come."

Anyone caught helping Jews in Nazi-occupied Poland risked being summarily shot, along with family members - a fate Sendler only barely escaped herself after the 1943 raid by the Gestapo.

The Nazis took her to the notorious Pawiak prison, which few people left alive. Gestapo agents tortured her repeatedly, leaving Sendler with scars on her body - but she refused to betray her team.

"I kept silent. I preferred to die than to reveal our activity," she was quoted as saying in Anna Mieszkowska's biography, "Mother of the Children of the Holocaust: The Story of Irena Sendler."

Zegota, an underground organization helping Jews, paid a bribe to German guards to free her from the prison. Under a different name, she continued her work...

In 1965, Sendler became one of the first so-called Righteous Gentiles honored by the Yad Vashem Holocaust memorial in Jerusalem for wartime heroics. Poland's communist leaders at that time would not allow her to travel to Israel; she collected the award in 1983.

Yad Vashem Chairman Avner Shalev said Sender's "courageous activities rescuing Jews during the Holocaust serve as a beacon of light to the world, inspiring hope and restoring faith in the innate goodness of mankind"... 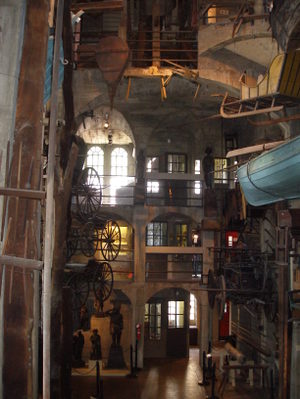 Some interesting links I came across today:

... Scientists get a LOT of emails -- perhaps even more than journalists. I've seen it firsthand with Future Spouse, who feels a genuine sense of accomplishment when he winnows his unanswered emails down to a mere 60 or so, even though it takes valuable time away from his research to do so. I'm sure some of the people still waiting for a reply occasionally feel like they're trying to interact with dark matter or something. (Trust me, the dark matter NEVER returns phone calls or emails. We only have indirect evidence that it even exists.)...

According to the article, these people are appalled at the fire ants that are attracted to the hum and vibration of their outdoor home theater equipment, the pigeon droppings that land on their zinc countertops, and the berries and leaves that clog their water pumps. Not to mention the sticky yellow pollen on their nice furniture and the general dirt and grime of outdoor living.

Sigh.  What a waste.  I also liked this quote from a New York Times article, The Futile Pursuit of Happiness, which Garden Rant mentioned:

But Gilbert has always liked questions that lead him somewhere new. Now 45, Gilbert dropped out of high school at 15, hooking into what he calls ''the tail end of the hippie movement'' and hitchhiking aimlessly from town to town with his guitar. He met his wife on the road; she was hitching in the other direction. They married at 17, had a son at 18 and settled down in Denver. ''I pulled weeds, I sold rebar, I sold carpet, I installed carpet, I spent a lot of time as a phone solicitor,'' he recalls. During this period he spent several years turning out science-fiction stories for magazines like Amazing Stories. Thus, in addition to being ''one of the most gifted social psychologists of our age,'' as the psychology writer and professor David G. Myers describes him to me, Gilbert is the author of ''The Essence of Grunk,'' a story about an encounter with a creature made of egg salad that jets around the galaxy in a rocket-powered refrigerator.

...Mostly, the children were well-treated and grew up to develop close ties to their British hosts. A few were mistreated or abused. A number of the older children joined the British or Australian armed forces as soon as they reached 18, and joined the fight against the Nazis. Most of the children never saw their parents again. Of the 10,000, it is believed that 20-25% eventually made their way to the U.S. or Canada

The Kindertransport Association, made up of surviving refugees, has more information. 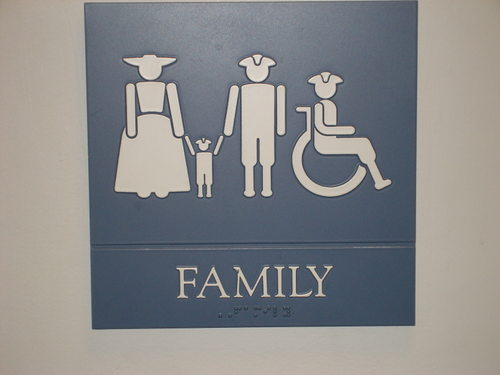 From the "Peeling the Orange" section of today's Durham  (NC) Herald-Sun:

Franklin McCain, one of four men who staged a famous sit-in against discrimination in Greensboro in 1960, had a very receptive audience this week in Chapel Hill when he spoke to students in the fourth, fifth and sixth grades at Scroggs Elementary.

But he had a tough time relaying one of the fundamental aspects of the story.

He explained that his group staged a sit-in at the Woolworth's lunch counter in downtown Greensboro.

He got blank stares.

Finally, a teacher piped up, "You know, like a Target?"

The students seemed to understood that, perhaps thinking of the small cafes that some Target stores have, and a resounding "Oh!" filled the room.

Target? Come on. What about Sutton's on Franklin Street? That's a lunch counter.

This student protest began on February 1, 1960, when four NC A&T freshmen shown in the mural photograph sat down at the downtown Woolworth lunch counter and tried to order something to eat and drink. They were told that people of their race had to stand up at another counter to eat. The young men stayed until the store closed, and students returned to sit-in the next day. This peaceful protest continued for nearly six months. Similar protests sprang up across the South. In July 1960, three local stores changed their policies to allow integrated counters that served people regardless of race or color. The successful protest did change local custom, but legal change, both locally and nationally, came with the Civil Rights Act of 1964 and the Voting Rights Act of 1965. The four original protesters were Ezell Blair, Jr., Franklin McCain, Joseph McNeil, and David Richmond. The museum exhibit features four of the seats from the 1960 Woolworth lunch counter and a detailed time line, along with reproduction photographs and newspaper headlines.

The former Woolworth's store is now the International Civil Rights Center and Museum which has a very interesting, and more detailed history of the sit in.