For fans of "Chicago" and Disney: The Spell Block Tango

I love this video!

[Hat tip to Everything's Coming Up Broadway and The Mary Sue]

Honest Trailers: Star Trek Into Darkness ("Are we sure we don't want to put a colon in there?"

I never got around to writing the post I came up with on how women are portrayed in Star Trek Into Darkness.  This Honest Trailer sums it up pretty well in less than half a minute (1:48 to  2:13).

The Jurassic Park one is good too - I love the 70's R&B music during "Re-witness... The Goldblum" - for a scene we've always considered to be pointless.

Tom Hiddleston must have a sense of humor...

...either that or he's a really good sport.

On The Mary Sue this evening, I ran across this video with Cookie Monster:

... which reminded me of this Comic Con 2013 video of Tom Hiddleston hamming it up as Loki...

... which reminded me of one of my favorite scenes from The Avengers:


[I barely blogged tonight - after a voice lesson, choir, and a Skype conversation with daughter, I almost forgot.]

RA. One is an Indian, science fiction, superhero movie.  What more could you want?

Our Zumba teacher posted her playlist today so I've had lots of fun looking up the videos for the songs.  I love the video for Chammak Challo, a song I've enjoyed in Zumba classes for about two years, but hadn't known the name of.

It's obvious from the end of the video that more is going on here so I went and looked the movie up on Wikipedia:

The film follows Shekhar Subramanium (Khan), a game designer who creates a motion sensor-based game in which the antagonist (Ra.One) is more powerful than the protagonist (G.One). The former escapes from the game's virtual world and enters the real world; his aim is to kill Lucifer, the game ID of Shekhar's son and the only player to have challenged Ra.One's power. Relentlessly pursued, the family is forced to bring out G.One from the virtual world to defeat Ra.One and protect them.

We've been wanting to watch a Bollywood movie for a while, and this goes with our recent superhero trend.*  It's now at the top of our Netflix list.  Here's the trailer:

*  We've only been watching movies with PG-13 violence in them with younger son for about the last year so we've been watching a lot of action movies.  We also watched the 1979 Superman because he hadn't seen it yet.

Posted at 10:17 PM in Film, Music: The Soundtrack in My Mind - Individual Songs, Videos | Permalink | Comments (0)

A Dream Within A Dream - Edgar Allen Poe

Yes.  For you Princess Bride fans,* that is the actual name of Poe's poem.

We were discussing the Seven Deadly Sins this evening, and we ended up at the Wikipedia article when Dear Husband couldn't remember all of the Latin names.  We wandered a bit further through the Wikipedia while looking up similar concepts in other faiths:  Arishadvarga in Hindu theology, and Kleshas in Buddhism.  Eventually, after donating to the Wikipedia because we use it so often, we ended up at the main Wikipedia page which featured an article on being hanged, drawn, and quartered (I wouldn't recommend reading it).  Dear husband asked who painted the illustration with the article (I don't recommend looking at it either).

The illustration was from a manuscript of Froissart, a medieval, French, chronicle writer.  We couldn't easily find the artist who painted the illustration, but the Froissart article mentioned that one of his manuscripts was illustrated by Brugeois artists of the day - from the Flemish city of Bruges.  I will show the Wikimedia photo for Bruges (below), which makes me really want to go back to Europe some day. 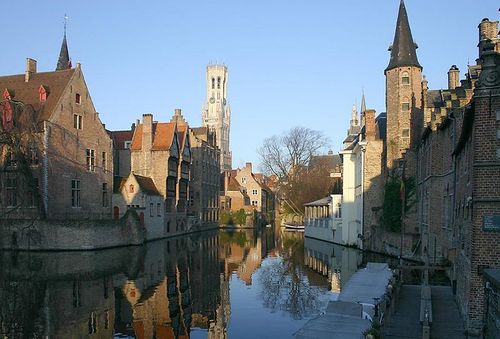 Getting back to the Seven Deadly Sins, while I was looking for the Latin names, we ended up at the post about sloth, at The Starry Cave.  The post goes into depth on sloth (socordia):

...Sloth has turned into absolute selfishness where one become a burden to ones surroundings where one’s own misery and hopelessness becomes the ominous worth of one’s sorry excuse for a life. A life where one feeds upon others goodwill and favors, where one expect the world to listen to one’s putrid lament while one is not giving anything to anyone – not even to oneself. Sloth can work as a darkened scale where one pleases others because one has renounced ones centre or that one like a beast of pestilence demands the world to attend to the suffering void of one´s painful existence. In both cases one has sacrificed ones soul to the realm of Hypnos and has taken greedily the chalice of Lethe’s waters of forgetfulness to mend ones pain and self-inflicted soul-sores. This is true sloth; a denial of love both its coming and going...
I recommend reading the whole post.
The post concludes with Edgar Allen Poe's poem, A Dream Within A Dream:
Take this kiss upon the brow!
And, in parting from you now,
Thus much let me avow-
You are not wrong, who deem
That my days have been a dream;
Yet if hope has flown away
In a night, or in a day,
In a vision, or in none,
Is it therefore the less gone?
All that we see or seem
Is but a dream within a dream.

I stand amid the roar
Of a surf-tormented shore,
And I hold within my hand
Grains of the golden sand-
How few! yet how they creep
Through my fingers to the deep,
While I weep- while I weep!
O God! can I not grasp
Them with a tighter clasp?
O God! can I not save
One from the pitiless wave?
Is all that we see or seem
But a dream within a dream?
* Here it is. I know you want to see it again:

Movies you would see if you grew up in our house: Part 3 - Drama/Suspense

These are the movies that you probably couldn't avoid if you grew up in our house (the ones that are italicized are the ones younger son hasn't seen yet):

Movies you would see if you grew up in our house: Part 2 - Fantasy/Science Fiction/Adventure/Western

Movies you would see if you grew up in our house: Part 1 - Animation

Last weekend, we were talking about some of the movies we refer to the most - plot, quotes, characters, etc.  These are the movies that you probably couldn't avoid if you grew up in our house (the ones that are italicized are the ones younger son hasn't seen yet):

There have been many pictures of Peter Falk as the grandfather in The Princess Bride floating around online the last few days.  However, as much as I love The Princess Bride and Columbo, my favorite Peter Falk role is in the 1979 movie, The In-Laws, with Alan Arkin.  Nobody else delivers a line quite the same way as Peter Falk did:

He also did figure drawings, which you can see at PeterFalk.com, and which include some of himself playing Columbo. 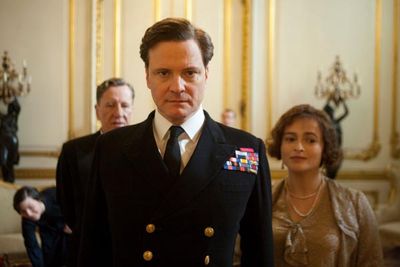 There are so many reviews of The King's Speech out there that I don't need to write one. However, we loved the movie, which we finally saw today, and we talked about it all evening after getting home from the matinee.

Back in January, when we first decided to see it, we were trying to find someone for younger son to stay with.  I got sick, then younger son, and older son got sick... then younger son got sick again...then dear husband and I both got sick... then (for the last 2 weeks) dear husband had the not-covered-by-the-flu-shot flu.  This weekend was cold and rainy, we were all finally well, and older son didn't have a heavy college workload for the weekend.  We were going to make sure to see it!

When it first came out, daughter saw it with friends.  She said that the plot wasn't the slightest bit R-rated and that the rating was pretty much due to that one word.  It's taken me about a month to get used to the idea of taking a 12 yo to a movie rated R, and, given the difficult time I had typing the first part of this sentence, I'm still not used to it.

I wasn't sure what younger son thought of the movie while we were watching, except that he thought the parts with the language were hilarious.  It had long, slow, quiet parts.  Was he finding it boring?  After the credits finished (we always watch the credits), he turned to me with a smile and said that he loved it.  It's one of his favorite movies!

I was determined that my kids wouldn't have that experience.  Daughter loves history and has a mind like a steel trap for it.  Older son enjoys it, although he doesn't have his sister's recall.  What's surprised me is that younger son, who is fascinated by engineering and technology, also loves history... well, except that history is a series of whys and causation, which is right up his alley.  I'm happy that they all enjoy it!

At the climax of the movie, the background music is one of my favorite pieces of Beethovens' - the Second Movement (Allegretto) of the Seventh Symphony.  Here is the New York Philharmonic conducted by Pierre Boulez:

* There was a time travel one that looked interesting, though the preview was still too loud and violent.