He who sings, prays twice: Cancer and faith

The last hour before you start a theater show looks crazy.  Everyone is getting into costume and doing their makeup in front of too few mirrors. People are making sure their props are in the right place.  Actors with mikes sing for the mike check.   The run crew makes sure the lighting, curtains, etc. are correct.  The orchestra and the singers warm up. Everyone is excited and rushing around.  The house opens and the audience starts to arrive.  Everything gets quieter backstage, but the excitement still simmers.

Finally, the lights go down.  The orchestra starts the overture.  Everything quiets down backstage.  The actors get into place onstage and in the wings.  You focus on what you're about to do.  It's like you're suspended and waiting to move.

In that beautiful moment of suspension, focus, and anticipation, I often (okay, almost always) have some of my most focused prayers - that the show will go well for everyone, that the audience will enjoy it, that cast members who are sick or sad will be able to enjoy the show...

...and thanksgiving.  Those are some of my most thankful prayers - particularly during this summer's show since I wasn't even sure I'd be able to sing again last fall after my surgery.

I don't know that I've written about this before because... well, your best prayers are supposed to be at church, right?

After not being able to go to church for months after my partial thyroidectomy last year (post here), I embrace any way that I can worship.  I've always thought that one can encounter God all over, not just in church.  But after months of being too dizzy and exhausted to make it through a formal service, I now enthusiastically advocate meeting God anywhere and everywhere.

Otherwise, only the healthy can encounter God in a significant way!  If you can only meet God in a long church service after a drive which exhausts you, that leaves those with health problems out in the cold.  If you look at the stories about Jesus, leaving the sick out is not following Jesus!

I've always liked physical expressions of faith - making the sign of the cross, kneeling for prayer (before I had knee surgery), genuflecting, etc.

During my long recovery from surgery, I started feeling like genuflecting at places other than in the Nave at church.

At Ayr Mount in the spring... 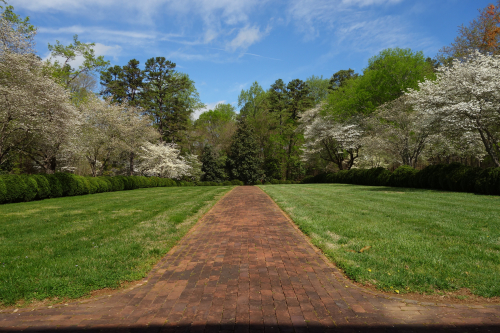 ...at family dinners, at choir rehearsals (I could go to rehearsals long before I could last through a formal service), while doing short hikes in the mountains, out in the gardens, etc. - anyplace I felt thankful and closer to God.

At various churches, we've heard all sorts of things about how and why to pray to God:  To remind God of His promises (evangelical); adoration, petition, thanksgiving, confession, and intercession (Catholic), because the Bible tells you to, etc.

Since my surgery, pat answers about prayer seem even further away.  Petition?  Walk around the Duke Cancer Center and see the small,tired children with bald heads and large stuffed animals being wheeled around in strollers or wagons by their parents.  Why was my cancer solved by surgery, and their treatment goes on and on?  I don't know.  There are few prayers that are more fervent than the prayers of those parents.

I still pray.  Mostly for other people, a bit for me, lots of thanksgiving.  I pray because... God.

There's really nothing else to add.

Praying in a church at a service is nice - it's pretty and inspirational.  I no longer believe that it's essential - because anything that leaves out the sick can't be the only way to God.

I still believe the Eucharist is important, but - and here's the difficult part for me - I no longer believe that it's essential because anything that leaves out the sick can't be the most important way to God.

My faith at this point is expressed in two ways.

First, by taking care of people.  After not being able to do much of that for months, it's so wonderful to be able to do.  Those of you who were in this year's musical saw that on overdrive this summer.  I recorded music to help people learn it, had the altos over to my house to work on music, hosted set painting work evenings in our garage, sewed, and I'm now going through the over 1,000 photos that my husband took at a dress rehearsal to edit the best ones for the cast.

Taking care of people - and almost all of that could be done at home because my energy isn't back to lots of running around yet.

[Note:  I wrote this a year ago, after I was in a local production of Li'l Abner.  After not being able to sing for four months the previous fall/winter because of my partial thyroidectomy, I actually got my first solo singing role in a theater production!  Being with my theater family that summer and being able to help out so much, was very healing for me after a long year of a slow recovery (and choir helped immensely over the spring, even though I wasn't well enough at that point to make it through a long Sunday morning).  A year later, after two more wonderful musical theater experiences (Ragtime and Annie), I've come back to this post, and it's still pretty much what I believe.  I'll be looking for a church closer to home (hopefully) in the next year or two.*  What I'm looking for in a church hasn't really changed from what I've always wanted, but I'm finally being really open about what I feel is what I should do with this time I have been given.  More on that in future posts, but, it's really all here in this one.  Singing and helping people.]

* Younger son has one more year of homeschooling left so I'm not splitting my focus at this point.  Also, we've always rushed into joining churches, and I'd like to do things differently this time.