I've never been to a book reading at a bookstore before.  Driving somewhere, sitting in a crowded room, listening to someone read just a small excerpt of their book has never appealed to me.  Why not just sit somewhere peaceful at home and read large parts of the book?!

I understand book readings now.  Tonight, I went to one at the Purple Crow bookstore in Hillsborough (a very short drive).  D. W. Frauenfelder and Lyn Hawks were reading from their new books, and I really enjoyed it!*

Before I went, I hadn't thought about the authors voice-acting their own stories as they read, which was great.  I also enjoyed the introductions, interactions, and questions.  I think it was probably even more interesting because the two discussed their reactions to the other's work.  I'm also fascinated by discussions of the creative process.  What makes someone create something out of nothing?  Where do they get their inspiration?  How do they go about creating?

If you're interested, they're doing two more readings.  Here are the descriptions from his blog, Skater in a Strange Land:

Saturday, September 14, 2 PM, McIntyre's Books, Fearrington Village, Pittsboro, NC. We're doing a tribute to our mentor, brilliant, literary-medalled, late author and creative writing professor Doris Betts. McIntyre's is a great independent bookshop. We will have a couple of surprises for this one.

Sunday, September 15, 2 PM, Fullsteam Brewery, Durham, NC. A laid-back party with games, trivia, munchies, and beer. Come by to say hi and have a pretzel, a craft brew, a signed book. Perfect for your Hallowe'en (?) gift plans. 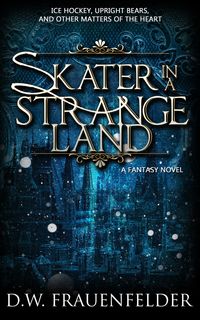 Longtime readers of Moomin Light may remember my posts discussing posts on the blog, Breakfast With Pandora, by DF.  He doesn't blog as often as he used to because he's been writing Skater in a Strange Land.

How to describe it... it's a sort-of-Steampunk novel about a hockey player, a phase-shifting continent, political intrigue bears, and a romance.

I was absorbed in the book.  The characters are well-drawn, the interactions are vivid, and the plot... well, as you can tell from the description, the plot is complex, but it kept me engaged the whole time.  I really enjoyed the setting, which was a combination of totally alternate fantasy (with the phase-shifting continent), Victorian manners, and 19th century Europe.

24-year old Sherman Reinhardt dreams of playing professional ice hockey, but after a disappointing career at a backwater Minnesota college, he's going nowhere fast. Nowhere, that is, until he becomes the first North American to play in the mythical Borschland Hockey League. Borschland is a place lost in time, where the locals ride in horse-drawn carriages, fly helium-buoyed airships, and go mad for their ice hockey. Making the team here turns into the least of Sherm's worries-- he's an overnight sensation and his team is skating towards a championship. But almost as fast he's hip deep in talking bears, political intrigue, the attractions of Rachael, a Borschic poetess-- and rumors that his hockey success is fixed. Is Sherm being used as a pawn in a grander game? Finding the truth, even if he loses Rachael, becomes this skater's ultimate goal.

A brief word about Lyn Hawks book, How Wendy Redbird Dancing Survived the Dark Ages of Nought, which I haven't read.  She describes it as a young adult novel for adults.  The excerpt she read is well-written, and she really gets into the head and the angst of a 15 yo girl.  Although I haven't experienced what this character has, the angst is painfully familiar.

Two final compliments for Skater in a Strange Land:

* Even though it was a very crowded room!  If you look at the Purple Crow website, that's the room it was in, and there were probably 30 people in it.

**   I'm not much at spectating in general.  As much as I love musicals, I spend more time onstage in them than I spend watching them!

Skater in a Strange Land links:

Thank you for this kind post, Moom. I was especially struck by your comment that this was the first author reading you'd ever been to. I guess as a writer myself I have always been fascinated by the person behind the book, and wanted to know how similar that person is to me. I told someone last night that the entertainment in author events varies widely. The last one I went to, Terese Anne Fowler reading from her novel about Zelda Fitzgerald, I felt was over too quickly-- she read very little from the book. I guess she felt less was more, and that as a popular author people might spend quite a long time in the signing line, so maybe she should cut the reading short. Or maybe it was a long session, but since I was interested it seemed short.

The reading last night went by quickly too.