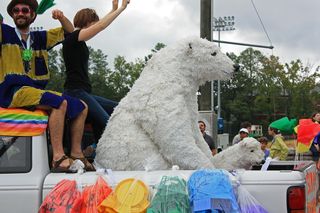 In the last year, I've found that doing yoga and getting massages have helped me to slow down and be more thoughtful (and reduce blood pressure).  I'm really in a different, more observant, calmer frame of mind after both.  I like the way I think then.

Yoga, of course, is Eastern, but my massage therapist also has Eastern symbolism, etc. in her massage room.   I'm so used to the busy-ness of churches that I've been wondering if there is any strand of Western Christianity that encourages this kind of slowing down and awareness, but I hadn't gotten beyond wondering.

When I first found out that our church is having a workshop on Centering Prayer, I was really excited.  Unfortunately, it's the same day as as the Durham Pride Parade that we've gone to the last three years.*  I should try to find books on Centering Prayer.

Dear husband was talking to the guy setting up the sound system at The Depot in Hillsborough yesterday evening.  This gentleman plays a number of instruments including the mandolin, drums, guitar, and the tuba.  He mentioned that he'd be playing in the Pride Parade in a few weeks.  He's the sousaphonist for The Bulltown Strutters, a wonderful, New Orleans-style community parade band.  We've seen them in the Pride Parade and in the Hillsborough Handmade Parade.  Dear husband said he'd cheer him on in a few weeks.

Here are the Bulltown Strutters in last year's Handmade Parade:

* It's also a really busy weekend because the Gallery Players in Burlington are performing Fiddler on the Roof (and we have a friend in the cast), and the Carrboro Music Festival is that Sunday.**  Being an introvert and knowing that this would make me exhausted, I've told the guys that I'll talk to them as much as they want at these events, but I will probably be really un-conversational the rest of the weekend.

** We also usually go to the Duke Gardens fall plant sale on Saturday morning, but we'll have to skip that this year.

[The polar bear was on the Durham Scrap Exchange truck in the Pride Parade two years ago.]