"The Girl Who Circumnavigated Fairyland in a Ship of Her Own Making" - Catherynne M. Valente 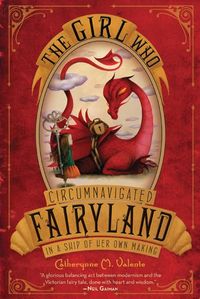 In September's world, many things began with pan.  Pandemic, Pangaea, Panacea, Panoply.  Those were all big words, to be sure, but as has been said, September read often, and liked it best when words did not pretend to be simple, but put on their full armor and rode out with colors flying. - p. 51

Some of the most common reviews don't affect me at all.  I don't really care what the New York Times, The Washington Post, Time Magazine, etc. think about a book.

I do look carefully at books recommended by some of my favorite bookstores - Flyleaf Books in Chapel Hill, the Regulator Bookshop in Durham, and Malaprop's Bookstore in Asheville.  I love to browse in their "Recommended" or "Staff Picks" sections.  At Malaprop's, the staff member whose tastes are the closest to mine usually has her recommended books at the bottom right hand end of the "Staff Picks" shelves.

That's where I found The Girl Who Circumnavigated Fairyland in a Ship of Her Own Making (back in June when I had my vacation in Asheville).  Granted, I was already looking for it because of a review that they'd had in a Tumblr post.  Unfortunately, I can't find the exact post, but it highly recommended the book and said to ask any staff member if you couldn't remember the title while you were there.

The first paragraph charmed me:

Once upon a time, a girl named September grew very tired indeed of her parents' house, where she washed the same pink-and-yellow teacups and matching gravy boats every day, slept on the same embroidered pillow, and played with the same small and amiable dog.  Because she had been born in May, and because she had a mole on her left cheek, and because her feet were very large and ungainly, the Green Wind took pity on her and flew to her window one evening just after her twelfth birthday.  He was dressed in a green smoking jacket, and a green carriage-driver's cloak, and green jodhpurs, and green snowshoes.  It is very cold above the clouds in the shantytowns where the Six Winds live.

I bought it at Malaprop's.  It continues to charm me, and I'm about 1/4 of the way through.  It's one of those books that I only read when I have lots of energy and attention so that I don't miss any little detail.

However, I'm not sure I'm going to continue where I am.  I was reading it this evening, and realized, about the time that I got to the quote at the beginning of this post, that it would be a beautiful book to read out loud.

Younger son is 14 yo now so, before June, it had been a while since I read out loud.  In June, I injured my hand and there were lots of things I couldn't do, including dishes and cooking.  I started reading out loud to dear husband while he was cooking, and younger son and older son usually ended up in the kitchen listening too.  So far, I've read many chapters of Let's Pretend This Never Happened** by Jenny Lawson, which is a hilarious book, and the first chapter of The Americans:  Fifty talks on our life and times by Alistair Cooke,*** which is as thoughtful as you'd expect from him.

*  Here are the three reviews:

** Also bought at Malaprop's on vacation.

*** Bought at The Book Exchange on vacation.  It was a wonderful vacation for bookstore browsing!

I read the title and ordered it immediately. When I'm done I'll come back and read the rest (I didn't want any spoilers)! Thanks for sharing!

This sounds wonderful! It reminds me of a song Katie sang to me as we were driving from L.A. to Sacramento a week ago: http://music.sjtucker.com/track/the-wendy-trilogy-iii-green-eyed-sue-sues-jig

Thank you! I enjoyed that one.