Home Archives Profile Subscribe
Seagulls at Colonial Lake
How long until the next election?

Some of the books I bought in Asheville, and a bit about The Book Exchange

"In many countries, and Britain used to be one of them, a reporter is a potential enemy.  The Americans, however, feel it is better to have a friend in print than an enemy.  And this, too, is a great danger, for nothing castrates a reporter so easily as flattery."  - "Telling One Country About Another (Marth 2nd, 1969) - First Chapter in The Americans:  Fifty talks on our life and times by Alistair Cooke

When I was in Asheville visiting my daughter, earlier this month, there was a day or two of near record heat.  First thing in the morning, I'd wander around outside, but, eventually, I'd go in search of air conditioning.  One afternoon, I spent an hour and a half reading Little, Big in the branch library near where she lives until the rain came through and cooled everything down.

Another late morning, after getting overheated, I cooled off by wandering around The Book Exchange in the Grove Arcade.  The store is sort of like a snail shell - you keep going through rooms that are arranged going round and up and in until you get to the end room. 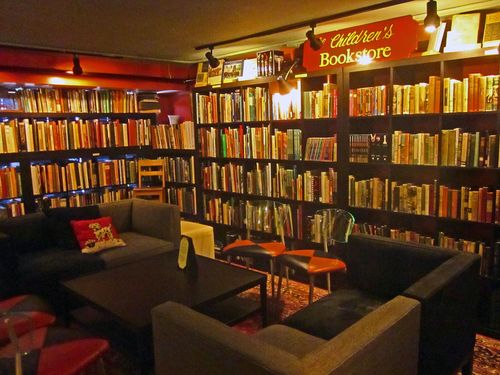 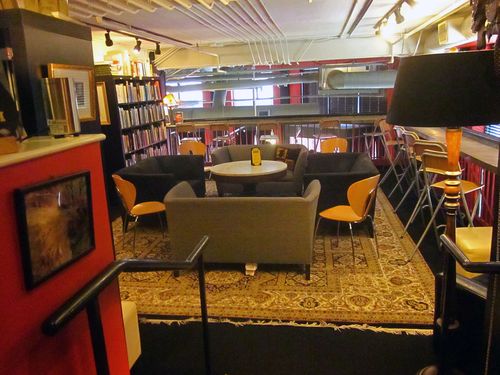 This room and the next one have Art, Architecture, and Design. I've spent the most time in this room (the end of the spiral on the inside).  It's nice and cozy, and it has a wonderful book on U.S. Art Deco architecture which I looked at this time.  The S & W Cafeteria building, the first building in the section on the Southeast, is just a block away in Asheville: 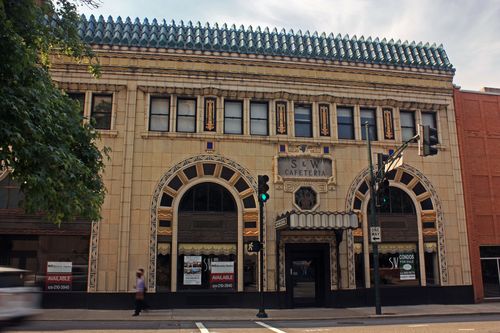 I had already picked up Alastair Cooke's book, a selection of radio talks for the British about the United States in the 1960's and 1970's.  As you can tell from the quote, it's a very pithy book.  I read the first chapter out loud to dear husband this evening while he made dinner.  I injured my hand earlier this week so I couldn't be much help in any other way.*

I also bought Let's Pretend This Never Happened at Malaprop's while I was there.  Two weeks ago, I started reading it out loud to the guys.   I read until I was almost hoarse because the book was so good. It's written by Jenny Lawson, who writes The Bloggess, a hilarious blog.

Back to The Book Exchange - I also bought Adventures with Old Houses by Richard Hampton Jenrette, whose hobby is restoring old homes - very expensive old homes, which he restores with meticulous accuracy.  These include Edgewater, on the banks of the Hudson River,** and two houses in the Carolinas which I won't name because dear husband hasn't read the book yet.  He goes into great detail about buying and restoring the houses and about their history.  Younger son, who has always been interested in engineering and design, is reading it right now.

* I can type a bit, but anything involving any gripping or lifting is painful.