Where was my mistake?, or Basically whining, and Something's Got a Hold on Me, and also Robot and Frank

I overdid it this weekend, and I didn't even do that much.  Last week, I thought I was just having really bad allergies.  By Thursday, my throat really hurt, I felt like I was trying to swallow around a golf ball in my throat, and I couldn't stay warm, which is really strange since it was in the upper 80's.  I went upstairs at one point, late in the morning, to "lie down for a few minutes." I woke up two hours later. 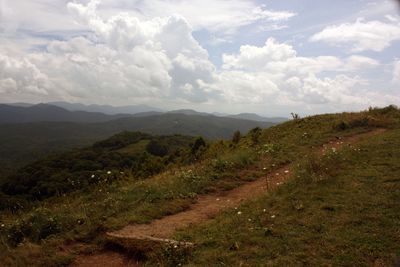 I'm not very good at resting when I'm sick.  In some cases, like last week, I'm not even really good at realizing that I'm sick.  I just mentally beat myself up for days for being a lazy person.  Look - the previous weekend we visited daughter in Asheville, did lots of things, and hiked at Max Patch (right).  Why was I so lazy last week?

Why can't I realize when I'm sick?

I didn't even think to take my temperature on Thursday.  On Friday, when I felt a bit better and my internal thermostat was back to normal, I realized that I probably was getting over being sick and that I might have had a fever.  However, I was not sick anymore so I should be back to normal - and not be SO LAZY!

Saturday, I almost didn't have energy for the usual Farmers' Market trip and walk in Hillsborough with dear husband.  I took a nap when we got home and another nap after lunch.  I finally started feeling slightly normal so off I went to Broadway Dance.  Okay, there are so few people registered for it that it's probably going to be cancelled for the fall so it was possibly my only chance to take it in the near future.  I had lots of fun, and we danced to Something's Got a Hold on Me:

I really did think that I was back to normal yesterday evening, but it took me two naps to get through today, and I've been depressed for most of the day.   My asthma is still in high gear after whatever 24/48 hour virus I had.  My breathing squeaks when I lie down even after using my inhaler.  I need to get a new one.  I was already hoarse before I went to sing in choir at church this morning (in retrospect, probably not the wisest thing to do, but choir was so small at the rehearsal on Wednesday that I didn't want to wimp out).

Well, I wrote that after dinner this evening.  You would think that I would have realized that I needed a nice quiet evening at home...

...Do you know that downtown Durham is really quiet at 10:30 at night?  We really wanted to see Robot and Frank in the theater.  It's only going to be at the Carolina Theater for two weeks, and there are very few nights that dear husband, older son, and I all will be free to watch it so we went tonight.  It's only an hour and a half long so, if you go to the 9 pm show, you'll be out by 10:30.

I've been a fan of Frank Langella's since I saw him in Dracula when I was at MIT.  They showed movies in the lecture hall that the freshmen Physics lectures were held in.  All the freshmen pretty much took the same course unless they took Physics for Poets (which wasn't the real name, but I don't remember what it was really called) so it was a huge lecture hall.

Anyway, I've noticed that Frank Langella has so much screen presence that most actors seem two dimensional next to him.  That doesn't happen to Susan Sarandon in Robot and Frank.  They're both wonderful in it.  It's an excellent movie, with many more layers than the trailer leads you to believe:

*Extra points to anyone who gets that reference.  I've been listening to it a lot this week.