Madonna on the Half-time* 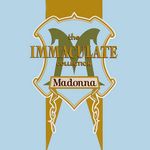 We often spend Super Bowl Sunday out hiking because the woods are so peaceful and deserted.  This year, we spent it at my mother's house having a wonderful time celebrating older son's birthday.  I totally forgot that the Super Bowl was going on.

However, when people started debating Madonna's performance in long conversations yesterday on Facebook, I knew I had to go check it out.

I've been a longtime Madonna fan and also a longtime not Madonna fan.  I enjoy her catchy pop tunes, and we have her Immaculate Collection CD.  However, as a performer, she seems very cold, even in her sexy performances, so I'm never really drawn into them.  I wasn't predisposed to either like or dislike her Super Bowl performance.

After reading all the comments yesterday, I went to look up the YouTube video today.

Verdict:  It was a very enjoyable spectacle.  She had a good selection of songs,** good guest artists, fantastic dancers, and she still holds the stage as commandingly as ever.  As usual, I found her very distancing, but she's performing in front of millions of people, in person and offline, so I certainly wouldn't expect her to be more personal!

Really, the first time I got emotionally connected to the performance was when the LMFAO*** guys appeared.  I've found their videos very funny and over the top (possible future Friday Fun Songs) so I giggled when they came on. Okay, and when the gospel choir started singing, I got chills up and down my spine because I love gospel singers - so, for me, it was a better Madonna performance than usual.  She really seemed to be enjoying herself singing Like a Prayer - more than in the rest of the performance.

*  Title is a play on Madonna-on-the-half-shell, a kind of yard ornament.

** Though I wish her current single didn't have the cheerleader part.  It's a good song otherwise.

***  Which I prefer to think of as "Lilies may flower all over" Original story for the name here - it comes from a grandmother. :)

And I thought your title was a play on another Divine Miss M on a shell - but I guess she actually arrived inside a WHOLE shell...

I love Madonna, and I loved the halftime. I think you're right on with your analysis and response to criticism. Overall I think people were pleasantly surprised with the performance, and I think she used the field better than any halftime in recent memory (Vogue comes to mind).

If I can do half the things Madonna did when I'm 53, I might just throw my own superbowl party!

Moominpapa: She could have put on quite a half time show, too!

Being able to do what she does deserves a party. :)