Duke Gardens in the snow: Part 2 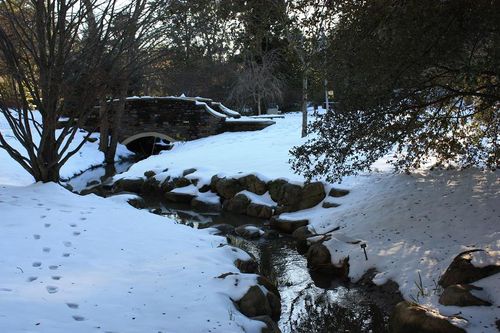 Bridge in the Asiatic Arboretum 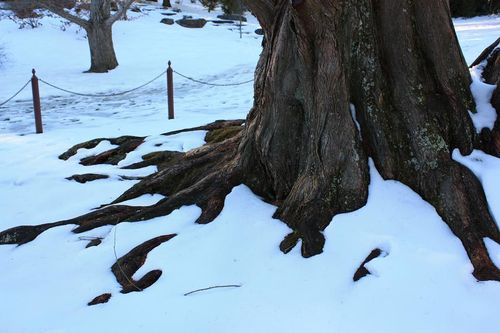 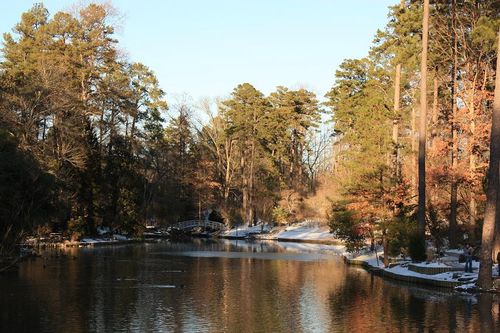 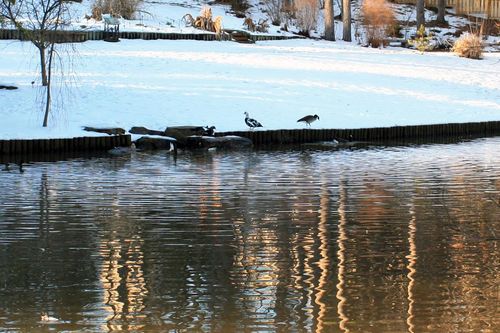 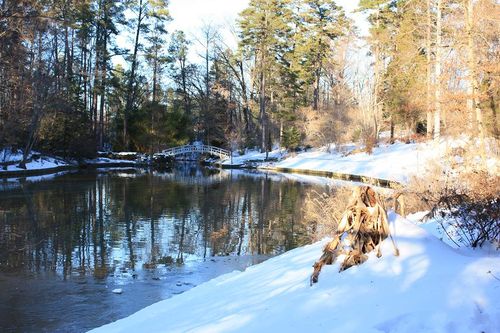 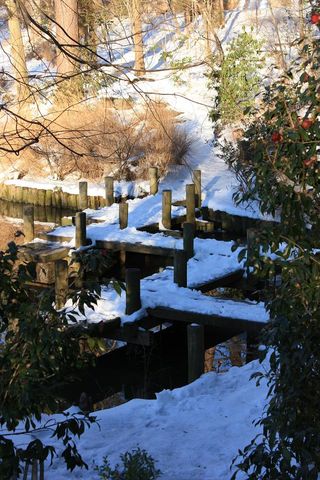 I was wise and did not cross the zigzag bridge this time. 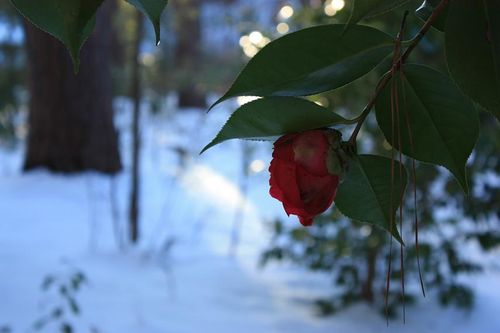 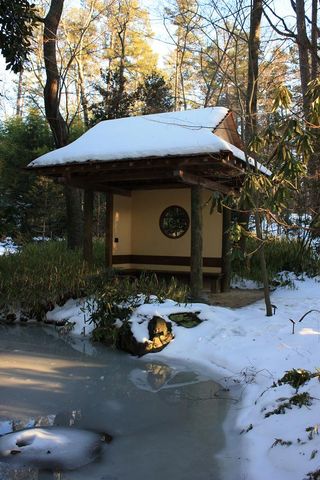 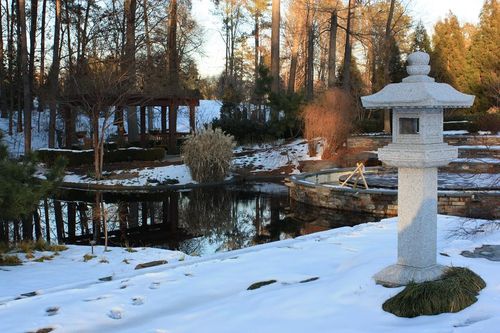 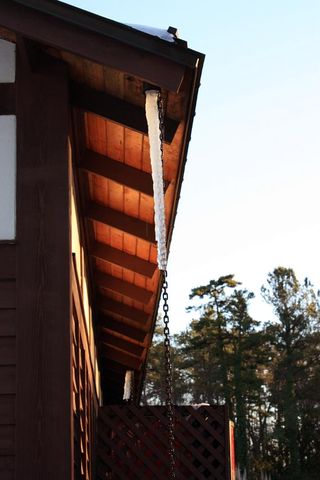 The downspout chains on the Visitors Center develop wonderful icicles.

Now, really - if you read my blog regularly, you can't be surprised at this post.

Or, maybe you could.  Wise people didn't drive today if they didn't have to.  However, daughter had a long Hamlet rehearsal so I drove her to it in case the roads were bad (they were pretty good in Orange County this afternoon (they'd even been plowed in the neighborhood we went to).  Younger son was playing with friends all afternoon so I had 2 1/2 hours to occupy, and eastern Chapel Hill isn't that far from Duke Gardens, right?! 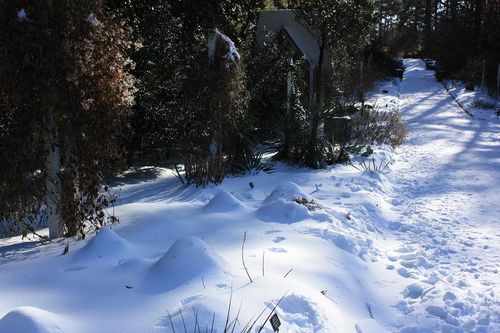 The worst part of navigating the gardens (while being careful of my knee) was going down the totally icy steps at the entrance.  I finally ended up climbing over the low wall and walking on the snow covered grass. 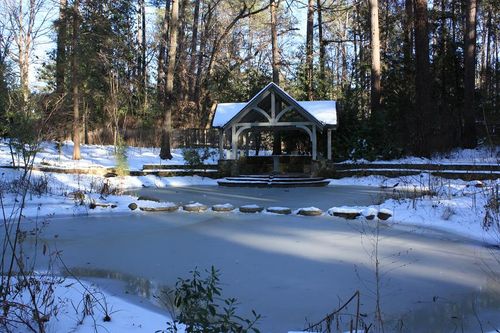 Gazebo in the Blomquist Garden of Native Plants
All afternoon, I loved the patterns of sun and shade. 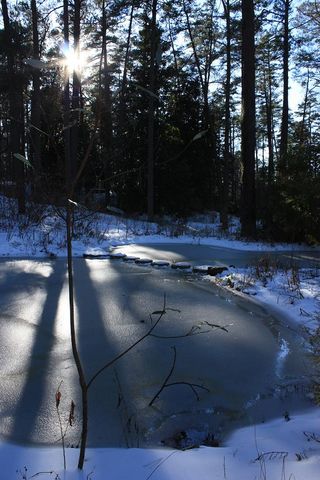 View from next to the gazebo 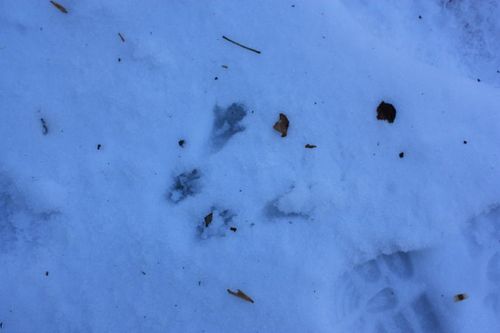 I'm assuming these are squirrel prints (next to my boot print) 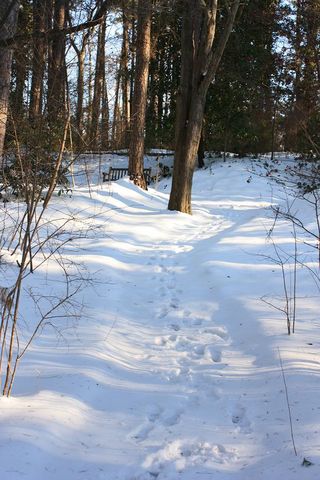 Bench in the Native plant garden.

It was wonderfully peaceful there today.  I only passed about 2 dozen other people in the 90 minutes I was there.  Everyone was very friendly - maybe it's because we were all sharing this special, beautiful place on a day when most people wouldn't venture in. 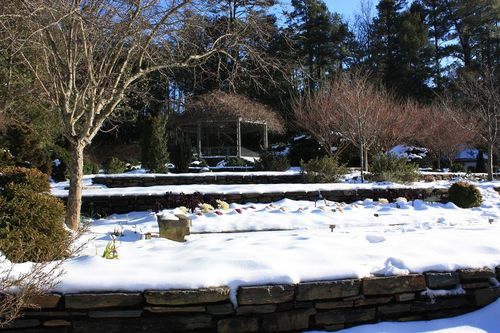 Wisteria arbor in the Terrace gardens 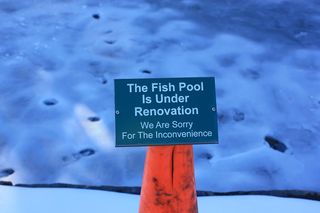 They emptied the Koi pond out last week. 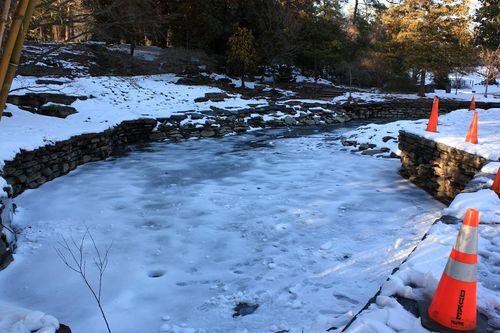 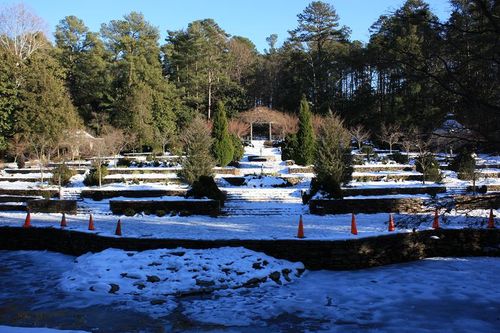 Although the roads in Durham were not plowed nearly as well as those in Orange County, they weren't too bad.  I decided to take Erwin Road (sort of the country route) back to Chapel Hill.

They hadn't plowed it yet on the Durham County end.  Although a few sunny patches of road had melted, for most of that part, I were lucky to have two tire tracks to drive in, and there were plenty of parts that were totally icy.  I hadn't driven on ice for a number of years because we haven't gotten much snow, and I haven't had to go out in what little we've gotten.

I was fine, but I could have done without the guy in the car behind me.  He got bored with the pace the van ahead of me was setting so he kept slaloming around the lane.  He was close enough that I could see the big grin on his face in my rear view mirror.  Fortunately he turned off in a few miles.  Once I crossed back into Orange County, the road was clear again.

I was very tired by the time we got home  because of all the driving, the walking in the cold, and trying to navigate the snow without re-injuring my knee.  My neck was so tense that it was causing me to be dizzy this evening even while I was sitting still.  I had to do lots of neck stretches to get un-dizzy.

Still, it was worth it.