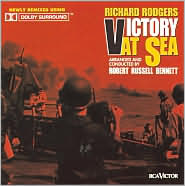 Of all the pieces that we played in my high school wind ensemble, I had a few favorites that stood above the rest.  One of them was the Victory at Sea Suite.  Victory at Sea is a documentary series, which was broadcast by NBC in 1952 - 1953, about WWII and the war in the Pacific. Richard Rogers had been writing for Broadway and films for almost thirty years when he and Robert Russell Bennett wrote the background music which was later condensed into the Suite.*

I've always been a Rogers and Hammerstein fan - starting with seeing The Sound of Music when I was five years old.  My mother and I took the train from my grandparent's house in the suburbs into downtown Cleveland where we met my aunt at the central station and went to see the movie.  It all seemed very glamorous.  It's one of my earliest memories (which also means that I may have this memory totally wrong).

Many of the pieces, such as the 1812 Overture, that we played in wind ensemble were familiar to me.  However, Victory at Sea was a new discovery, and I went out and got the album.  My favorite movement was Beneath the Southern Cross.  Here's the documentary version (the melody starts at 35 seconds):

and the suite version.

A few weeks ago, I was going through a new Broadway book looking for pieces to learn in my voice lessons.  I had chosen a few, and then I ran across a song, No Other Love, from an unfamiliar Rogers and Hammerstein musical, Me and Juliet. There's no shame to me that I didn't know the musical because it was one of their least successful musicals, and it isn't often performed.

I started playing the introduction to No Other Love and was amazed to find that it was Beneath the Southern Cross - with words.  Unfortunately, it's not often recorded, and most of the recordings on Amazon are sung by Perry Como or Bing Crosby, who are good singers, but not my style (here's the original Broadway version, which is a bit too florid for me).  Fortunately, I found a version by Ella Fitzgerald from Ella Sings Broadway.

My main problem with this song, besides the ending high F, which I'm fine at mid-lesson but which disappears when my voice gets tired, is that I practice it too long and I get very hoarse.  I don't want to stop singing it.

*  Although Robert Russell Bennett is usually only credited with arranging Victory at Sea, he actually contributed much of the music.  The Library of Congress:  Performing Arts Encyclopedia says:

Rodgers composed the musical themes while Robert Russell Bennett composed lengthy elaborations on his themes, orchestrated the music, and timed musical sequences to fit with the edited film. Sounds from nature were incorporated into the musical arrangements and airplane engines rendered in the key of F-sharp minor. The NBC Symphony Orchestra recorded the music with Bennett conducting.

and the Wikipedia adds:

Richard Rodgers contributed twelve basic themes for the series, with three earmarked for the first episode, but those who worked on the series attribute its eleven-and-a-half hours worth of music principally to Bennett. Rodgers himself wrote, “I give him [the credit] without undue modesty, for making my music sound better than it was.”

Posted at 12:08 AM in Music: The Soundtrack in My Mind - Individual Songs | Permalink | Comments (0)