Sigh.  This was supposed to be my relaxing day.  No choir (the parish was on a retreat at the beach)(Why I wasn't there?  You think I'm an extrovert?!) so I was going to spend the morning blogging.  Maybe, we would take a hike in the remnants of the snow in the afternoon.  I like doing that on Superbowl Sunday because the woods are so peaceful.

Instead, I spent the morning sleeping with a sore throat and a fever.  The closest I got to going outside was watching younger son and his friends throw snowballs at each other.  I don't feel up to much, but I don't want to sleep too much, otherwise I probably won't be able to sleep tonight.  I've going through and cleaning up photos on the computer.

Here's one of a dinnertime visitor on Tuesday night.  Younger son and I had gone to the science museum that morning, and we spent quite a while watching the opossums.  They were unusually active, and I hadn't previously noticed what sweet faces they have.  Here's one that came to eat whatever it could find under the bird feeder that evening: 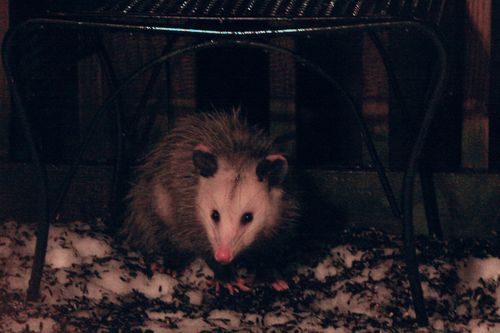