Home Archives Profile Subscribe
For fans of So You Think You Can Dance (or for anyone else who likes beautiful dance)
"Smoke on the Mountain" was fantastic! 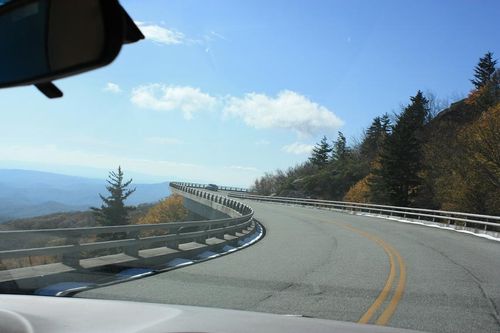 The Linn Cove Viaduct on the side of Grandfather Mountain, NC.

I'm deep into my things-I-need-to-do-before-I-have-knee-surgery-and-can't-stand/squat/walk/etc.  Next week, when it stops raining, I'll do as much as I can of the outside things. Every fall, I spend lots of time gardening, and then, once the weather gets cold and the fall garden projects are over, I take care of the inside things that I fell behind on.  This year, the cold weather part will come after my knee surgery (a week from today) so I've been using all this rainy time (thank you, remnants of Hurricane Ida) to get lots done inside.

After this morning's work, the kitchen floor is mopped, the toaster oven and microwave are clean, the shower is as clean as it's going to get without strong chemicals not recommended for asthmatics, and a bit of progress has been made on younger son's room.  However, at lunchtime, I was feeling dissatisfied.  I had gotten lots done, but, if I don't have something new and interesting to talk about, I feel like my day is rather flat.  I feel like I'm rather flat.

Fortunately, daughter, who was actually home for a bit today between work this morning and doing tech for Alice in Wonderland all evening (I'm leaving to pick her up at 9:30.  The first year a teen has an NC license, they can't drive after 9 pm except for work) had some interesting things to discuss.  We had a long conversation about the lack of the hoped for behavioral change as a result of New York City's new law that restaurants have to display calorie counts.  Researchers have found, after a year of this, that most people ignore them, particularly the people in low income areas who rely on McDonald's - the people the law was targeting.  This didn't surprise us - once you have a long commute out of your neighborhood to get a job, have to take care of kids in the time left, worry about danger in your neighborhood, etc. - calorie counts may not be high on your list of worries.  However, public health researchers seem to be surprised.  We also talked about So You Think You Can Dance.  Younger son was actually interested in both conversations.  He voted for Legacy and Kathryn too.

Last night, I told younger son to head for bed at

around 10:45.*  I went up about an hour later, and I heard him scurry over and turn his light off.  He did a good job of seeming still in bed, but, after saying goodnight to older son, I went into younger son's room.  He looked at me and said that he got caught up in his book:  "I'm on chapter five already!"  It turned out that he was reading I'll Meet You at the Cucumbers.  That was one of older son's all-time favorite books (he says it might have been his first introduction to poetry).  I told younger to turn his light back on and read as long as he wanted.

* We homeschool.  Not only does he not have to get up early, I do better if I have some time to think my own thoughts first thing in the morning.