Two Quotes and a Kitty

Middle school is a tragic time for us all, and as we held hands at school dances, the skeletons in our closets were able to tango without too many people noticing.
(The Full Spectrum, ed. David Levithan and Billy Merrell, p. 112)

He saw almost two hundred miles of countryside, most of it sprawling world metropolis, and savored every inch, tried to grok it.  He was startled by the size of human cities and their bustling activity, so different from the monastery-garden cities of his own people.  It seemed to him that a human city must wear out almost at once, so choked with experience that only the strongest Old Ones could bear to visit its deserted streets and grok in contemplation events and emotions piled layer on endless layer in it...

Mike looked forward to returning to Washington in a century or two to walk its empty streets and try to grow close to its endless pain and beauty, grokking thirstily until he was Washington and the city was himself - if he were strong enough by then.  He filed the thought as he must grow and grow and grow before he would be able to praise and cherish the city's mighty anguish.
(Stranger in a Strange Land by Robert Heinlein, p. 188) 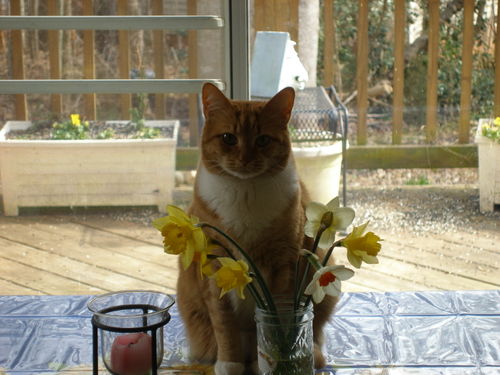 Lina kitty.  I just found this one on my camera.  I think daughter took it, but I'll have to ask her tomorrow morning.  No one else confesses to it.

I gave you an award today. Come on over to my blog and pick it up.
You're incredible!

Thank you so much!