To Tell a Story 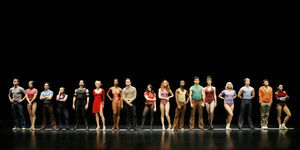 A Chorus Line takes place in one afternoon at the audition for the chorus line of a new musical.  The dancers interact and tell their stories with a bare minimum of props - a few dance bags, a cigarette, resume photos, rehearsal hats.  Besides the blank black backdrop, which turns into mirrors three times, the stage is bare except for the taped line on the floor that the dancers line up on.

And you're mesmerized (without intermission) for the entire production.

Plays take you to another world.  They give you the setting, you accept it, and the story is told there.  In Amadeus, the story is told by the older Salieri.  The movie  uses makeup and different settings for the older Salieri.   However, in the Playmaker's stage production, the difference in Salieri's age is only indicated by his hat.  When his hat is on, he's older and telling the story, when he takes it off, he's younger and in the story.

You accept that, and the story continues from there. 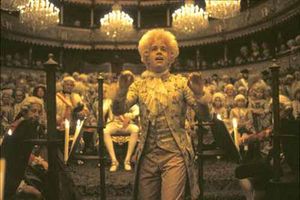 Movies generally are more "fleshed out" and lavish.  Amadeus, as a movie, is lush and filled with beautiful costumes and elaborate settings.  They help, in many ways.  Salieri can tell you onstage that Mozart was buried in a paupers grave.  However, the final scene in the movie, Amadeus, brings that vividly home as the pallbearers remove the coffin from the hearse, bring it over to the pit, tip it, and Mozart's wrapped body falls through the trap door at the foot of the (re-usable) coffin and onto the other wrapped bodies in the paupers' grave.  The pallbearers bear the coffin back to the hearse, and they spread lime over the bodies because they are leaving the pit open for new paupers in the following days.

That scene gives far more of a sense of a pauper's grave than just the words in a play.  That's part of the wonder of movies, which I love.  However, there's something about live theater that touches me more than most movies.  A good bit of it is the interaction between the actors and the audience - the immediate reaction to the actions onstage, whether it's applause or hisses or even just an audience-wide intake of breath.  The actor knows that he/she got through.  The audience knows that the actor knows.  Kevin Kline once said that he did movies to support himself while he does live theater, and I can understand that.

Another part of what I love about the theater is the "willing suspension of disbelief."  A Chorus Line is told with almost no props or scenery.  Chicago, which I thought was quite minimal with its six chairs, looks lavish in comparison.  Each of them draws you in, however.  The story and the acting, are so strong that you don't think about the lack of background.

Some of my favorite movies remind me of plays in that way.  Not that they're lacking in scenery or props, but in that they create their own little world which they ask you to accept.   The story is so strong that you do.

Of course, every movie, does that in a way.  However, most of them explain every corner of their world that you might question.  Iron Man, for example, like most superhero movies, spends a good bit of the beginning explaining all the details of how the character came to be Iron Man.  It's interesting, and technologically impressive, but you are explained into the world.

Some movies, however, just ask you to accept the world, in a quasi-theater-like way.  They don't explain everything.  In most fantasies, for instance, the rules of the fantasy world are explained in some way.  In The Princess Bride, although much seems quite "real life," for instance trying to start a war with another country, much also goes unsaid, like why the prince is marrying a commoner.  Most fantasies would have at least a line explaining that.  In The Princess Bride, you just accept it.

Characters onstage are also larger than life.  Often, stage actors and actresses don't end up playing the same parts in movies because they would have to tone it down on film.  The same expressiveness you need to reach the back seat in the balcony looks overdone and like "mugging" on film. 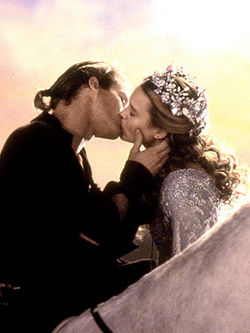 The setting isn't any more realistic than six chairs representing 1920's Chicago, but you're drawn into the story and you accept it.  The movie isn't about realistic characters or settings, it's about True Love, and everything in the movie serves that purpose. True Love is larger than life also.

Sometimes the story itself is the unreality into which you are drawn.  The King of Hearts takes place inside an insane asylum which is temporarily outside.  There's a bomb hidden in the town, and all the townspeople have left, leaving the inhabitants of the asylum behind to wander the city.  Corporal Plumpick has been sent in to defuse the bomb, and ends up interacting with the inhabitants.

In a real war movie, which this one starts and ends as, Plumpick wouldn't be what he is.  He's not a hard bitten soldier; he takes care of the homing pigeons.  His more gentle personality provides a bridge between the community of the insane and the community of the sane.  Again, it's an unrealistic war movie, but it serves the story of the peacefulness of the insane contrasted with the horror of the sane. 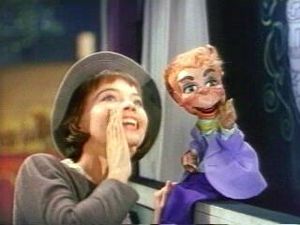 Lili is unrealistic in both plot and character.  Lili joins a carnival as part of a puppet act.  She interacts with the puppets as a girl would, but comes to understand the world, emotionally, as a woman.  Charmingly played by Leslie Caron, Lili is not a realistic character.  The background characters are just figures - the beautiful magician, his jealous wife.  The only three characters that have any sort of three dimensionality are Lili, the puppeteer, and the puppeteer's assistant.

In Lili, the very structure of the story is unrealistic. The magician, acting as one of the single boys, invites her to join the carnival.  Her homelessness is not a tragedy, but just part of the story.  She's quickly, and without question, included in the puppeteer's act.  She lives in the same trailer with the puppeteer and his assistant, but with not the slightest prurient hint - these all take place in a different world which we just accept.  The background - setting and minor characters - are secondary to the tale of a girl/woman who can look past the surface and love what's underneath.

What made me bring all of these together is a movie which I only recently realized fits in with them.

The Frisco Kid is always billed as a 1970's cowboy comedy, and, broadly speaking, it is.  To me, however, it never rang true as a regular movie, and that's because it also asks you to accept more than a movie normally asks.

Some of these things, such as the portrayals of Native Americans (right) (very un-PC for the 1970's), I used to think were just flaws in the movie, but, when we rewatched it last week, I realized that they were just part of what the storytellers were asking you to accept.  Another was Harrison Ford's portrayal of the bank robber with a heart of gold, who just happens to take the main character halfway across the country. The number of coincidences in the movie are far too much to ask.

At first glance, this movie looks like a regular western with all the western's trappings - Indians, bank robbers, trains, farmers, bad guys, dangerous saloons, even culminating in a shoot out in the street.*  As a regular western, however, it doesn't ring true - not just because it's a comedy and things are more broadly painted than in a straight movie (and it's not really that much of a comedy either).  I realized, last week, that things are more broadly painted in order to emphasize the main character.

For all that Harrison Ford does his usual good job with the bank robber, the movie belongs to Gene Wilder as the (again) innocent but wise rabbi trying to get overland to San Francisco.  Of all the Gene Wilder movies I've seen, this is, by far, my favorite. 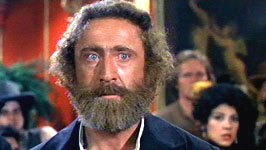 The thing that sticks in my head the most about his performance is his eyes - he acts so much with his eyes in this movie.  They express his thoughtfulness, his joy, his rage, and his determination.  His character stays true to himself, despite everything that goes on.  At one point, again, he's homeless and penniless, and that even in a foreign country.  He accepts (calmly or not-so-calmly in true manic Gene Wilder fashion) everything that goes on, but stays true to his beliefs and his goal no matter what (you cannot ride on the Sabbath even if you're being chased by a hanging posse).  It's very difficult to get this across in words because he ends up sounding like a sanctimonious boy scout, but that's not the case at all.  He loves G-d, his faith, his friend, and he is unwavering in his devotion - in a fanciful and charming fashion.  He's too quirky to be blandly ideal.

I never know what to call these stories.  The Princess Bride is the only real fantasy.  Fables have the connotation of existing for their moral, and these stories are more than that.  Walking the Berkshires, in a very good review, refers to "The King of Hearts" as a parable, but, again, that implies that the lesson is the point of the story.  Maybe "fantasy" is the best way to think of all of them, although, to me, they have a theater-like reality which is more realistic than far more graphic movies.

* Unlike the traditional western, however, the shoot out is not the climax of the movie.  That happens earlier in the restaurant with the two main characters.  The shoot out is merely the denoument.

[I've been putting this post together in my head, and then online, for over a  week.  Often, these kinds of posts just stay in my head, and I never have a chance to type them, but I was determined to actually get this one down.  These are some of my very favorite movies, after all.]

You posted it! This is one of your best. Great comparisons, and it flows so well.

Thank you! Of course, it's so long, I wonder if anyone's even going to read it (grin).