Meme/Saturday Fun Songs: "Finishing the Hat" and "Putting It Together" sung by Mandy Patinkin from Sunday in the Park with George

White. A blank page or canvas. The challenge: bring order to the whole. Through design. Composition. Balance. Light. And harmony.

(The opening lines to Sunday in the Park with George) 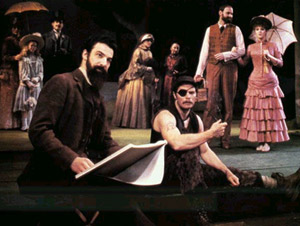 I had "Putting It Together" from Sunday in the Park with George in my head this evening while I was making dinner, and I realized that it would serve both for my (delayed) Friday Fun Song this week and for a meme from Breakfast with Pandora.

What little-known or under-the-radar movie is your favorite inspirational or thought-provoking film?

Here's one of them.  Actually, it's a film of a stage musical, but it is one of my favorite musicals.

How people create has always been fascinating to me.  How do you make something out of nothing?  Where do artists, composers, writers, choreographers, etc. come up with their ideas?

The music to Sunday in the Park with George is lovely although there are no show stopping tunes.  The acting in the version I've seen is wonderful, particularly Mandy Patinkin who brings his usual manic energy to the second act character of George Seurat's great grandson, and who also condenses that energy into the more outwardly calm character of George Seurat in the first act.  Bernadette Peters is also wonderful as Dot, Seurat's mistress.

However, the story of an artist's relationship with his art, his society, and his love is what draws me to this musical, more than anything else.

The first act portrays Seurat's creation of his masterpiece, A Sunday Afternoon on the Island of La Grande Jatte - and also both how society and other artists view his creation and how he interacts with those around him during the creation.  After Dot leaves him for another man, George sums up how his art separates him from everything, including her, in the song "Finishing the Hat:"

...And when the woman that you wanted goes,
You can say to yourself, "Well, I give what I give."
But the women who won't wait for you knows
That, however you live,
There's a part of you always standing by,
Mapping out the sky,
Finishing a hat...
Starting on a hat..
Finishing a hat...
Look, I made a hat...
Where there never was a hat

George is focused on creating, and everything else in life is secondary.

[As usual, I won't go into any more detail about the plot]

Because he creates in a different form, Seurat's great-grandson doesn't have that luxury, and the act of creation is far different for him.  He creates "chromolumes," color and light machines which use lasars.  This is an expensive proposition, and, as he sings in "Putting it Together," much of his energy is spent in getting commissions.

Here, he's at a reception at the unveiling of his most recent work, Chromolume #7, which takes place at the museum where his great-grandfather's famous work hangs.  His grandmother, supposedly Seurat's daughter, attends with him.

I love how he (mistakenly) sings: "So that you can go on exhibition..so your work can go on exhibition!"  Because of the monetary demands of his art, he can't be as solitary as his great-grandfather.  He has to seem to be engaged with other in order to get commissions, although, as seen in this song, he's also still quite distant.

Seurat's line about standing by, and the lines about looking at life "through the window" remind me of the Thomas Mann story Tonio Kroger which also takes that as its theme. I was greatly moved by that story, when I read it in high schoool. Because I can see how you could do that with your life, and in my twenties I often felt that kind of removal - that standing by and watching, appraising, judging, like a film editor or choreographer... But largely because of my involvement with you, and then even more with our children, this is not how things turned out. And while I can sometimes now have an image or a painting buzzing the background of my life or my mind all day long, it doesn't cut me off. It doesn't make me stay insisde when I'd rather be outside, living my life.