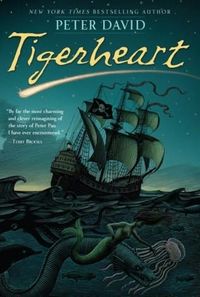 Peter David is one of my favorite fantasy/sci-fi writers, and I was looking forward to reading his new book, Tigerheart
As much as I enjoy his other books, there was no way I could have expected Tigerheart.  I've been trying to figure out other writers it reminds me of - a bit of E. Nesbit... a touch of Redwall... the amorphousness of some of Patricia McKillip's fantasies... the off-beatness of The Princess Bride...


It's a retelling of Peter Pan... mostly, but also much more.  The main character, Paul, goes into the Anyplace in search of what will make his mother happy, and that tells you the plot (or at least the beginning of it), but doesn't give anything away.  I hate giving things away, but I will leave you a few quotes to give you a feel for the writing, which is wonderful:

Paul was a fair-skinned boy, with short black hair cropped in neat, even bangs and the redness of cheeks that comes from adoring relatives pinching his face and saying, "Look at that lovely little face!  Why, we could just EAT HIM UP, yes we could!" For a time, Paul lived in fear of being fattened up and devoured, and thus did everything he could to prevent himself from becoming a potentially tasty treat.  This was a period which you and I would think of as Paul's desperate and ongoing attempt to thwart some cannibals, but Paul's parents simply referred to it as "That time when Paul was such a finicky eater, we have Absolutely No Idea how he managed not to starve himself to death, the poor lad - whatever is it that gets into children's minds?"... (p. 4)

Paul's father tells him stories about "The Boy:"

There was some confusion as to The Boy's whereabouts, according to Paul's father.  He said that some claimed The Boy was an infant who rode on a goat in Kensington Gardens after lock-out, playing his pipes and cavorting with the woodland sprites that supposedly populated the area.  Other times, The Boy was reputed to reside in a land called the Anyplace, which could be reached by flying to the third star on the left and continuing until morning.  When Paul asked eagerly if his father had ever encountered The Boy personally, his father became very quiet and the seemed wistful, as if he was either remembering something he had accidentally forgotten or tying to forget something he had no desire to remember... (p. 7)

And, in the Anyplace:

See him there?  Pull him up in your mind's eye now, and he should be clear to you.

The Boy, walking about the deck of the Skull n' Bones, a rakish-looking craft, foul to the hull.  See the swagger in him as he develops his sea legs, swaying back and forth.  Occasionally he will lash himself to the wheel in anticipation of a storm possibly blasting him off the deck, even though the sun is shining down upon him.  Realizing then that it has missed its cue, the sun will scuttle behind clouds to accommodate him and a storm will come rolling in, pounding harshly upon him while he grips the wheel, turns it sharply, and bellows, "Stay the course, ye scabrous dogs, or every man jack of you will feel the lash of the cat before we're done!" (p. 65)

I'm going to make everyone else in the house (except younger son) read it, and, since I'm not usually pushy, that's the greatest compliment of all (maybe I'll read it out loud to younger son...)!

I loved this one, too - couldn't put it down. It's now on my stack of future read-alouds so I can share it with the kids.

Ooooo! A read-aloud! That's how we get through the dark of winter. Last year Andrew read me Till We Have Faces, and because I was tired, we re-listened to some Jasper Fforde audiobooks. The People stories are on the docket for this year, and maybe Tigerheart, too, now.

this sounds excellent and you didn't steer me wrong on the Discworld series :)

Carrie K: I got it out of the library, but I think I'll buy it - I'll want to read it over, and read it out loud at our leisure.

some_myhrr: What are the People stories? Dear husband and I used to read out loud to each other while driving back and forth to work.