Daughter has a friend over, younger son is over at a friend's, older son just woke up, and my muscles are sore from swimming yesterday.  A good excuse time to catch up on bloggy things. [And that's how far I got yesterday!]

We did a day trip to Lynchburg a few weeks ago.  I'd wanted to visit Poplar Forest again (last time was 11 years ago), and dear husband had recently been in downtown Lynchburg for a business meeting and wanted to take us to see it.

"When finished, it will be the best dwelling house in the state, except that of Monticello; perhaps preferable to that, as more proportioned to the faculties of a private citizen."
–Thomas Jefferson 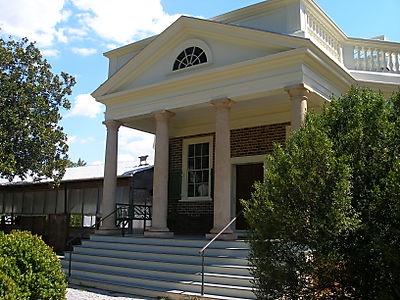 Poplar Forest was Thomas Jefferson's retreat.  A good host didn't tell his guests when to leave, and visitors who traveled the long distance to his main residence, Monticello, could stay for weeks.  Nothing said that the host had to remain in residence, however, so Poplar Forest was designed as a place where he and a few members of his family could retreat from his social duties (leaving his daughter as hostess at Monticello, but I won't get into that)(maybe she liked it?). 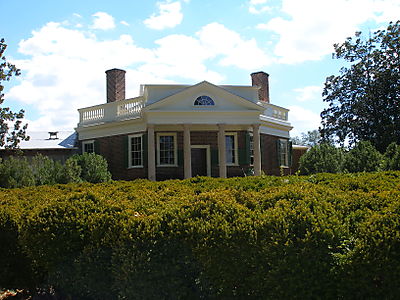 try not to go on too much here!

Poplar Forest is much smaller than Monticello, and, in my opinion, much more fun to tour.  Monticello tours, as informative as they are, and as beautiful as the restored Monticello is, are large and move through the house efficiently.  Poplar Forest is not as well-known and is still being restored.  Our tour consisted of our family and one other couple - which leaves lots of time for questions and discussion.  The other couple had restored a house so they had questions about that angle, and we're very interested in history (oh, along with dear husband having grown up in a 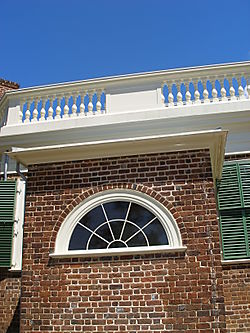 hundred year old farmhouse that always needed work).  You can't take pictures of the inside so I'll just link to the website photos.

Poplar Forest is very geometrical.  The house is an octagon, with four, elongated, octagonal rooms (one split by the foyer) surrounding a perfectly cubical (20 ft in every dimension) room (plan here).

His bedroom was on the right hand side in the "bush" picture above.  It had a staircase down to an indoor privy (photo of window in staircase and beautiful blue, Virginia sky, left).  His granddaughters' room was on the left side - and the slaves had to go through their room to get from the kitchens to the dining room.  The dining room was in the center, with no windows, but a lovely 16 foot skylight.  The last time we visited, they hadn't plastered the walls yet, and you could see marks on the wall where former owners had put in a staircase to a second floor.

My favorite room was the parlor - south facing with lots of  windows! 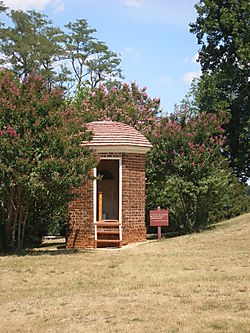 Even the outdoor privies were octagons (left).

The overall feeling was designed to echo Palladio's Italian villas (click here for an example, and here for the theory and history).  Instead of having attached wings, Jefferson had a detached wing of offices on the east side which had the kitchens and other workrooms, and trees on the left side (no longer there)(photo below).  Instead of having the rooms on the end of the wings, Jefferson had earth mounds covered with trees and bushes (few of which remain).  The privies were hidden behind the mounds - aesthetically pleasing, but cold in the winter! 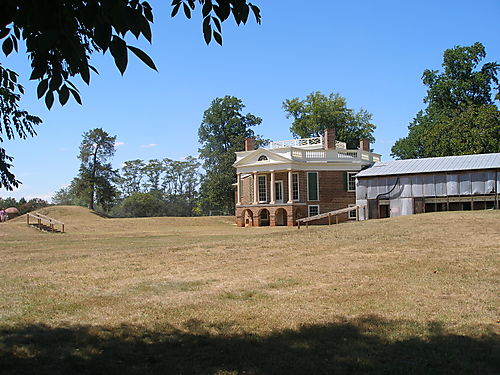 The downstairs section has information about life at Poplar Forest and about the restoration.  There were two things I found particularly interesting.  They're doing microscopic analysis of dirt in the lawn to see if there is pollen that can tell them what plants might have been over there two hundred years ago!  And, old, rats' nests have been useful because the rats got bits of paper and fabric from the living areas to line the nests so they have bits of the newspapers of the time and the clothes. 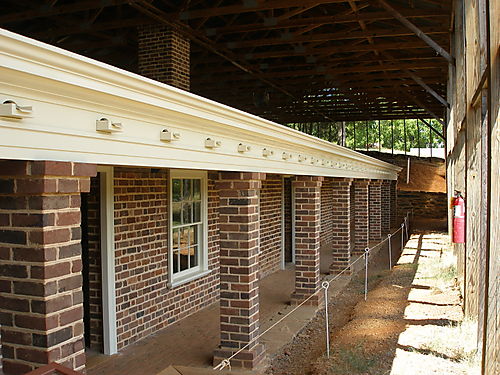 The restoration of the office wing. 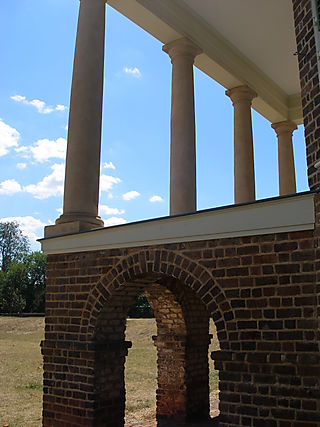 I like the sky and the angle here.  It's fun to take photos here because of all the geometry.  The sunlight was also beautiful that day. 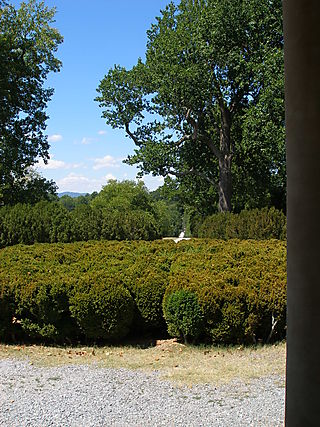 View from the front porch (those are the Blue Ridge Mountains in the distance).  My knee problems gave me a good excuse to sit here for a while (grin).

This is a really interesting post. I love the shapes, too. Your pictures came out really well. My eye is especially drawn to what I guess is the front port area.

And what a gorgeous day you had - the sky is brilliant blue!

Magnificent photos, sweetheart - they really capture the feel of the place. So quiet right now. I hope it stays that way.

DCup: It was a beautiful day, and one of the coolest we've had for weeks (except when the remnants of Fay went through).