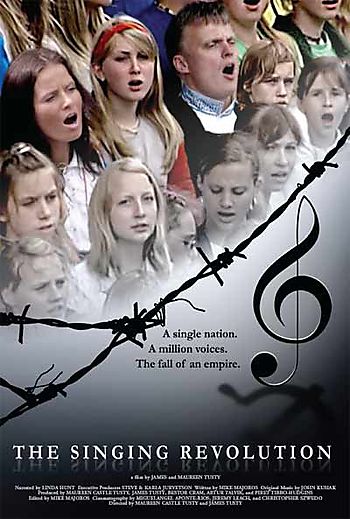 My mother highly encouraged us to see The Singing Revolution, which is a wonderful film about Estonia's history and fight for freedom.  Obviously I listened, and I rearranged the week so that we could go see it before it left tomorrow (we waited until older son was off today so that he could see it too).

It's difficult for me to describe the movie for two reasons.  First, it sounds very odd.  A "singing revolution?!" Against the might of the USSR?!  When these events happened, 1987 - 1990, I didn't have the Internet as a source of news about small countries.  Smaller details of the breakup of the Soviet Union, like the events in the Baltic states, didn't get widespread press.  Older son was born in 1988 so I didn't have the time to research it.  I knew what little was in the mainstream news and in English articles that my mother passed on to me from Vaba Eesti Sona (Free Estonian Word), an Estonian-American newspaper.

The "Singing Revolution" was possible because of worldwide public opinion and because there were so many other things going on in the soon-to-be-no-more Soviet Union that, although the Soviet army did enter Estonia, it did not follow through.

And why singing?  Singing has always been a primary expression of Estonian culture; in fact, the m

ovie mentions that Estonia has one of the largest  collections of folk songs. Singing was a way to keep their culture and unity alive during the Soviet occupation.  For over 100 years, including during the occupation, the Tallinn Song Festival has brought Estonians together (right - the stage holds 25,000 singers).  Though the movie ranges through Estonian history and includes very interesting interviews with participants in the revolution, it is unified by the choral rehearsals and performances.


The second reason I find it difficult to describe the movie is that it swept me away.  It's beautifully filmed.  The singing is wonderful, and the way it is used in the background, even in the non-singing scenes, kept the movie together.  I'm not a student of cinematography, but the pacing also worked very well.  There are many dark chapters in the history of Estonia under Soviet rule that had to be presented, but, as tragic as they are, they don't overwhelm the film.  It always comes back, at the right time, to the hope of the Estonian people as expressed through their singing.

Here's the trailer.  Hopefully, it will give you a feel for the movie:


There were various aspects of the film that struck me very personally.  One aspect was the language.  I didn't learn how to speak Estonian while growing up, but it turns out that I know more Estonian than I thought.  I would recognize various words that I know from Christmas carols or from listening to my Estonian relatives.  Another aspect was the variety of Estonian accents; one sounded just like my uncle (daughter agreed).

The aspect that kept me busy in the beginning of the film, however, was Estonian appearances.  With my straight, blond hair and round face, I've always felt that I looked unusual - particularly when we lived in New York.  Even in North Carolina, where more people are blond, they're not usually the Scandinavian/Baltic type.  Since I was little, I've always looked at books on Estonia to find women, or girls, who looked like me.  In these scenes of large choruses of singing Estonians, I would see women who looked familiar - closer to what I see in the mirror.  Interestingly, in one scene of a boys' choir rehearsal, I saw a boy who resembled younger son.*  Even in an Estonian movie, of course, most didn't look all that much like me, but many resembled various relatives or friends of my parents'.

It turns out, by the way, that I was wrong about today being the last day.  The film is playing at the Galaxy Cinema** in Cary at 1 pm through next week.  I also highly recommend seeing it.  However, it's not for small children.  The movie blog doesn't recommend it for children under 9 or 10.  Even though there is very little violence in it (far less than in action movies) when someone is shot by a Soviet soldier, it's real.  And then the soldier goes to the edge of the pit and shoots them again.

A non-violent revolution, after all the violence that Estonians suffered (on one day, June 14, 1941, 10,000 Estonians were rounded up and sent to Siberia***).  That's what surprised me most of all.

I really wanted to share the movie on my blog, but I knew I couldn't do it justice.  I wrote anyway.  Tomorrow, I will post links and quotes from others about it and also more about the actual history.

* I hoped younger son wouldn't be bored at the movie.  It turns out that he loved it too and said that he likes history (which was news, good news, to me!).

** Which, if I don't get around to blogging about it again, is a really nice independent theater which shows art house and foreign movies.  I wish it weren't so far away - both of the previews we saw (one for broadcasts of La Scala operas and one for an Israeli film) looked very interesting.  We'd go back and see them if it weren't so far.   The snack bar is also exceptional for a movie theater - cappucino (if you like that sort of thing), espresso, pastries, and good popcorn (we don't like the popcorn at regular theaters) with real butter (rather than the oily stuff usually put on popcorn).

*** Altogether up to 60,000 Estonians were killed or deported in the 1940s.  June 14 is now Leinapäev, Day of Mourning and Commemoration.  (from the Estonian Embassy website)

This sounds like my kind of movie. I just check and it isn't playing here. I wonder if that means I've missed it or that it hasn't come yet.

You can request a showing in your area at the "Singing Revolution" website. I want to get the DVD if/when it comes out, but it was wonderful to see it on a big screen.