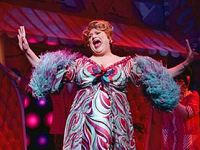 Last summer we went to see a fascinating exhibit at the Cameron Art Museum in Wilmington, NC.  Almost the whole museum (it's not large) was given over to a special exhibition of the costumes of William Ivey Long.  He has designed the costumes for over fifty Broadway musicals, including Hairspray (right), Chicago, The Boy From Oz, and Contact, and he's won numerous Tony awards.

This could easily turn into a long post about his work, but I'll leave that for another time.

We had never hear of Contact before, and the docent giving the tour enthused about the Girl in a Yellow Dress (part 3 from the musical).  Of course, we immediately looked it up when we got home.

Contact is a three part musical (it's also called a "dance play") with minimal dialogue, no singing on stage, and danced to prerecorded music.  Because of those aspects, it was a controversial win for the Best Musical Tony Award in 2000, and, the next year, a new category was created, Best Special Theatrical Event.

A swing dance in the third section is performed to Robert Palmer's "Simply Irresistible."  I'm amazed that, after being spun for such a long time (starting at 2:38), she can stand still when she finishes at 2:57.

Unfortunately, I had to take the video out because the one I was using was deleted.  Click here to view an un-embeddable version.

Talkin' Broadway has an excellent synopsis of the third section:

The show ends with "The Girl In The Yellow Dress;" the number that has become the focal point of the show's ad campaign. It was inspired by an evening Stroman [director/choreographer] spent at an after-hours dance club in which she witnessed a mysterious woman in a yellow dress who would enter the dance floor, wait for a man to approach her and either dismiss or accept him as a dance partner, after which she would retreat to the sidelines until the next time the mood struck. Stroman and Weidman once again found an exciting balance of comic and dark elements and created a satisfying tale of one man's search for personal salvation.* "The Girl In The Yellow Dress" tells the tale of Michael Wiley... a suicidal commercial director at the peak of his success who desperately seeks contact with something or someone to make his life meaningful. He finds it in a mysterious vision in a yellow dress... and, urged on by a Kramer-esque bartender... becomes a frequent visitor to the dance hall in an effort to reach redemption through connection.

The New York Times also has an excellent article, Making 'Contact' Without Conflict;  How a Hit Dance Play Evolved, Cordially, which, among many other aspects, mentions the yellow dress:

Then there were the technical glitches, like the fact that the costume designer, William Ivey Long, had to change Ms. Yates's arresting yellow dress nine times for various reasons -- one was too slippery, another too sheer -- getting it right just 48 hours before opening night. (There is now a yellow dress shrine in the wardrobe room, featuring all the failed versions.)

Lastly, from the book we bought at the exhibit, Between Taste and Travesty:  Costume Designs by William Ivey Long  (p. 58):

Director/choreographer Susan Stroman mused on the magic of the "little yellow dress" for that dance segment:  "The design team can sometimes give you the key to an entire show.  For example, I merely ...envisioned a girl in a yellow dress.  Nothing more than that.  It was William who came back to me with the absolute right color yellow and the absolute right style.  He chose the idea of a classy dress - classy yet sexy.  And he chose... the yellow you might find in a traffic light to make you proceed with caution, rather than a bright sunny yellow or a mustard yellow.  He was exactly right.  That dress became an iconic element in that show, and took its place in theater history"...

The apparent simplicity of the dress belies the complexity of its production.  Long detailed how Deborah Yates [dancer] put nine different prototypes through their paces:  "It was that hard to get right.  She was pulled across the floor, turned upside down, and lifted in the air.  The dress couldn't ride up, but all the underpinning had to be effortlessly invisible.  Each version had to be made and worn and danced in to be tested.  I couldn't do it all as theory, or I could have done it once."

* I love finding out where people's ideas come from and how they developed them.  The process of creating is fascinating.