This meme says to post five photos that "say something about the person you are."  Not too hard (except I added a picture to the fourth one to finish the thought). 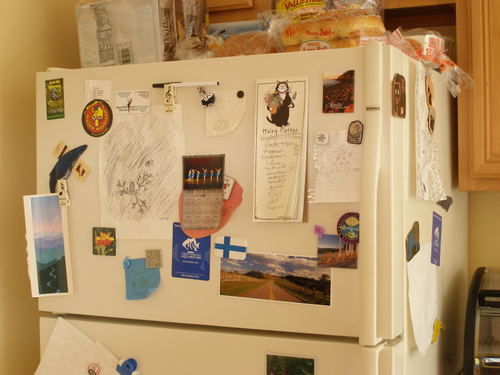 My fridge says lots about me.  First of all, it says, "I am not a designer fridge!"  I've got pictures drawn by my kids and pictures of my kids (you can't see most of those), a grocery list with a gardening cat called "Hairy Potter" (thanks!), magnets from special places like the NC and the SC aquariums, Acadia National Park, the Cone Manor on the Blue Ridge Parkway, and Mt. Mitchell, pictures of the mountains, local magnets like the Mellow Mushroom and the dance center, and other special things.   My fridge is quite loquacious, actually (more than I am!). 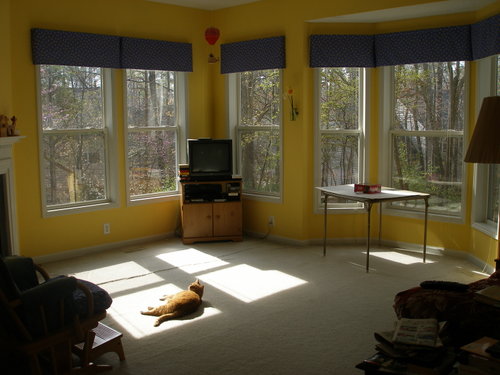 The living room is not as "busy" as the fridge, but says just as much about me.  What do you notice first?  Sunlight!  That's what we designed the room and house for.  We had the house plan set so that the living room would be on the southeastern side and we added the bay window (and another window to the right of it which you can't see).  Does it also say "This is a big empty room so they must not be done decorating?"  NO!  It says, "We've got lots of floor space for playing games, and making designs with pattern blocks, and putting up train sets, and creating worlds, and.... dancing!"  Every house needs a ballroom.  And a kitty.  And a little balloon above the TV which actually has a motor and goes around in little circles when you turn it on (birthday present to me from dear husband).  You can also see the redbud blooming out of the windows on the left. 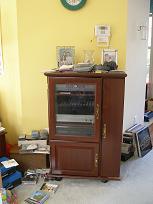 This picture says that I'm in the middle of a number of music-related projects.  I've got tapes to go through and categorize, CD's to put away, a pile of stuff on top of the stereo cabinet that came out of the cabinet when we got the new receiver and I haven't figured out where to put... and more.  No, the record albums to the right aren't waiting to be put away.  That's where they live.  For some reason, this house wasn't designed with a whole lot of record storage (and it's only a small part of our record collection). I wanted a whimsical picture, but my stuffed animals didn't want their pictures on the internet.  Instead, here is the most deliberately decorated room in our house.  Deliberately, but not seriously.  The wall is light blue (though it looks off-white here).  The painting is dear husband's "Housecats and Weathervanes" (click here to get a better view, although the colors aren't as vivid online).

We decided the light blue, and the white cabinet which you can't see to the right, gave the room a "beach-y" feel so we added fish, a crab, a boat (last two not pictured), and the whimsical picture below.

The two ducks on the ledge are from our 20th anniversary trip to Charleston.  We stayed at a really nice Marriott downtown (on credit card points which were really useful.  Usually we stay somewhere less expensive way out of town).  They left a duck on the counter every night - our two went in the bathroom. 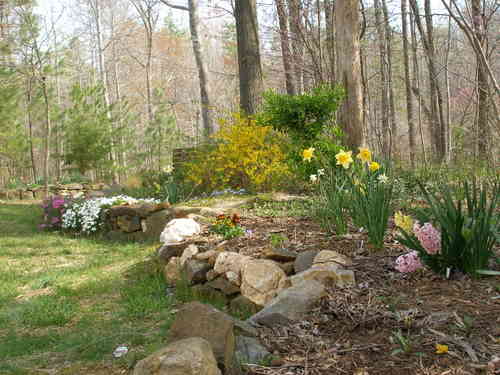 Of course, I had to have a garden post.  The front of this bed is right next to a beautiful, tall, tulip tree.  Bulbs do well in it, but other plants don't because the tulip gets all the water.  I'm trying to gradually fill the bed with bulbs.  The far end of the bed fares better, although perennials do better there than annuals.  Besides the fact that I love gardening, this picture also says that I try to work with what is - I don't try to turn flower beds, situations, or people into something they're not.

Great pics. My fridge looks a lot like yours, and sunlight is really important to me too. We get a lot of that in our living room also. I love your garden pictures always.

Love it!! Hope someday I have a house like this!:)