"Barry Manilow Hell" - with ”Blue” by Manilow and Sarah Vaughan, and ”Meet Me, Midnight” by Diane Schurr

There was a blur of different conversations in the choir room, and I, of course, was trying to listen to all of them.  Unsuccessfully.  At one point, the words “Barry Manilow hell” wafted forward from the back of the room. I didn’t hear the rest of that conversation, so I have no idea of the context, but the words stayed with me.

Barry Manilow seems to be the kind of performer that people love or hate, which makes me an anomaly, I guess.

Now, I’ll be honest, I had a crush on Barry Manilow when I was in junior high. Over 30 years ago. The crush disappeared by senior high, especially after his fifth (or was it the sixth?) album wasn’t much different than the previous ones. I haven't played them in years, though they sit on the closet floor with the rest of our records.

Now, Mr. Manilow is a talented guy, he found something that worked, and he kept doing it. Nothing wrong with that, even though I lost interest (to give you some perspective, I stopped buying Elton John albums after Blue Moves)(Billy Joel's music kept my interest all the way through, though). 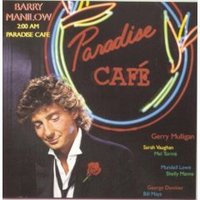 I didn’t totally lose interest, because he occasionally has done an album that’s different. Ones that aren't necessarily going to be commercially successful. My favorite is 2:00 AM Paradise Café. Not pop, but jazz. Not only jazz, but he got some amazing jazz musicians to play (Shelly Manne, Gerry Mulligan, and Mundell Lowe) and sing (Sarah Vaughan and Mel Torme) with him. The album was recorded live, and each side was recorded in one continuous session (except for the duets). When the album was re-released as a CD, he said that this is the one he wants to be remembered for.

Blue, a duet with Sarah Vaughan, is my favorite song on the album. It’s also fantastic to sing along with.

Other favorites to sample: When October Goes, Where Have You Gone, What Am I Doin' Here, Goodbye My Love, Night Song, and, of course, his duet with Mel Torme, Big City Blues .

The thing I enjoyed most about his first few albums was that he always had one swing/jazz type song on each: Cloudburst, Bandstand Boogie, Avenue C, and Jump Shout Boogie. I also enjoy his first Live album.  It's high energy and he doesn’t always take himself seriously. My other favorite (unusual) album is Showstoppers – not just because it’s Broadway! For instance, I love Barbra Streisand’s voice, but didn’t like a number of songs on her first Broadway album because of either the way they were produced or because the way she sang them didn’t fit in with the characters (Somewhere is a song of a young woman newly in love, not a woman of experience).

Back to Manilow. Showstoppers also has two collaborations, the first of which is my favorite song on the CD: Guys and Dolls' Fugue for Tinhorns, with Phantom’s Michael Crawford and Miss Saigon’s Hinton Battle (more on him in another post). The second is Look to the Rainbow (from Finian's Rainbow) with Barbara Cook.

He keeps to the style of the songs and the musicals, all of them are well arranged, and he isn’t afraid to occasionally ham it up (as in Once In Love With Amy). Other favorites: All I Need is the Girl, Real Live Girl, Dancing in the Dark (which could fit on Paradise Café), Luck Be a Lady, and I’ll Be Seeing You.

Not all of his attempts to revisit older songs worked. I have the album, Swing Street, and I occasionally listen to it hoping I was originally wrong. Unfortunately, I wasn’t – many of the songs are either over-orchestrated or “techno-ed” up. And even his fairly straight rendition of the lovely Stardust has little to recommend it over, or even alongside, other versions. So, this is what my kids grew up knowing of Barry Manilow – jazz and show tunes. Daughter said that the first time she heard Copacabana, she was amazed that it was Barry Manilow. He sings pop?!

If you need any other recommendations, here’s a whole album’s-worth from jazz diva, Diane Schurr. She has a whole album (Midnight) of songs which he wrote and also produced.  Here’s one of my favorites, Meet Me, Midnight.

[Tyou to the choir-member-who-shall-not-be-named-but-whose-voice-carries-really-well for giving me such a wonderful opening to start this post and for, unwittingly, reminding me to get it off the back burner.]

Posted at 11:13 PM in Music, Music: The Soundtrack in My Mind - Individual Songs | Permalink | Comments (2)

My best friend from Jr. High and I had a MAJOR crush on Barry Manilow too. Oddly enough, I went from Manilow to Bach. So my knowledge of pop and rock from the late 70's - 80's is rather sketchy.

I lost interest before Paradise was made, so I'm not familiar with it at all.

I did the same thing, except with the early 80's. I was majoring in music so I spent most of my time listening to classical music. I was also getting interested in folk music so I missed a lot of the 1980's music - until I started teaching aerobics.