I ration out Jane Austen books to myself at the rate of one a year.  2007's Austen was Pride and Prejudice (which I, of course, loved).

Last summer, after we both had finished it, but the guys hadn't, daughter and I decided that we wanted to watch a movie of it, but we had to decide which one.  There's the 2005 version, with Kiera Knightly, the 1995 version, with Colin Firth and Jennifer Ehle, the 1940 version, with Sir Lawrence Olivier and Greer Garson, and there are a number of other versions also. 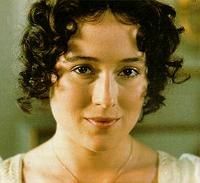 We quickly decided on the 1995 version because we read such wonderful reviews.  We also decided to watch it in the winter to help ourselves cheer up.

It does that very well. We started watching it last weekend, and the performances and production are wonderful.  Jennifer Ehle* (right), plays an adorable and spirited Elizabeth, and Colin Firth (below) plays a properly haughty and glowering Darcy.  Viewing the lush, green, British countryside helps to counter our winter gloominess.

The second disk arrived today.  We haven't gotten to the famous 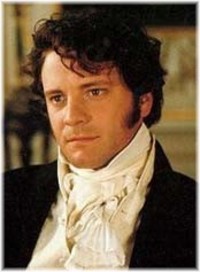 "Colin Firth (as Mr. Darcy) rising/emerging, dripping, from the lake"** scene yet (When you start reading about the movie, that's the scene that comes up over and over (okay, if you want to either relive it or ruin it for yourself, you can watch it here.  I'm waiting to watch it in context)).  The two characters did such a good job of hating each other by the end of the first disk that I'm looking forward to seeing how it gets resolved.

The lake scene was made much of in the second Bridget Jones book:

"We all fell silent then, watching Colin Firth emerging from the lake dripping wet, in the see-through white shirt. Mmm. Mmmm."

Reading both Bridget Jones books last summer also made me curious about the movie.  At one point, the fictional Bridget interviews Colin Firth, supposedly about his most recent project, but can't stay off the topic of Mr. Darcy:

BJ You know in Pride and Prejudice?

BJ When you had to dive into the lake?

BJ When they had to do another take, did you have to take the wet shirt off and then put a dry one on?

BJ (BREATHING UNSTEADILY) How many takes did they have to do?

CF (COUGHS) Well. The underwater shots were a tank in Ealing Studios.

CF I'm afraid so. The -um - moment of being airborne - extremely brief - was a stuntman.

CF That was because he had stuck on sideburns and a Mr Darcy outfit on top of a wet suit, which actually made him look like Elvis as you last saw him. He could only do it once for insurance reasons and then he had to be checked for abrasions for about six weeks afterwards. All the other wet shirt shots were me.

BJ You know the other wet shirt shots?

BJ Were they you?

BJ And did the shirt have to keep being re-wet?

CF A squirter thing. Look can we...

BJ Yes, but what I mean is did you ever have to take the shirt off and, and put another one on?

BJ To be wet again?

BJ What do you see as the main differences between the character Paul from Fever Pitch and ...

CF No one's ever asked me that.

CF No. I think the main differences are...

BJ Do you mean it's a really obvious question?

CF No. I mean no one's ever asked me that.

BJ Do people ask you that all the time?

CF Shall we get on now?

CF He's not a schoolteacher.

CF Paul in Fever Pitch loves being in a football crowd.

CF Whereas Mr Darcy can't even tolerate a country dance.

BJ Oh he did, though. That bit with the coffee cups, It's fantastic where that woman Miss Hughes is just standing there and Mr Darcy just masterfully takes the cups away and then, like, snogs her.

CF I think that might be a similarity, then.

BJ I'm not putting words into your mouth or anything.

CF No, no. Now. Can we talk about something which isn't to do with Mr Darcy? 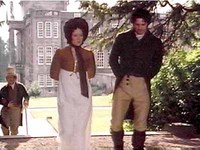 Getting back to the movie, if you've seen and loved it, there's a great article on the making of the movie here.***


*  Interview with Jennifer Ehle here.  I particularly liked this question:

Of the following men from Pride and Prejudice - Mr. Darcy, Mr. Bingley or Mr. Bennet - which would you want your son to grow up to be like and why?

~ These are the options?! It's amazing the species continues.

** The scene was originally planned to be nude, but the BBC didn't like that idea.  Colin Firth almost didn't take the role:

The irony is that Firth nearly didn't take the career-defining part in Pride and Prejudice at all. "I said no to it initially". He recalls. "I harboured doubts to begin with because I felt he was just too iconic to be played convincingly. Also, a part of me thought I was wrong for the part, and there was a large lobby among my friends who agreed. One said, 'Please, please, please don't play Darcy. You'll ruin it for me forever.' Another said; 'Darcy? Isn't he supposed to be sexy?'".

... the intensity of the reaction to the role took the actor by surprise:

... "Until I played that part, I was never aware of disappointing anyone with my presence. In 35 years, I had never seen anyone's face fall when they met me. If anything, that's the answer to the question 'What's it like to be a heart-throb?' You're a walking disappointment. There is no possibility of living up to a character who has that kind of grandeur."

...director Simon Langton often worried about the proximity of their sets to military bases: "I'm delighted that [our actors were happy] and I always believe that you get the very best from your cast and crew when everyone is relaxed. But every director will tell you that when you're working on a major project like this, every single morning you wake up and wonder what the hazards are going to be. Is it going to be rain, will the sun shine for you? Has anyone got a cold or the flu? And when we were making Pride and Prejudice, were the RAF going to do a close formation exercise bombing raid right over the top of us just as Elizabeth Bennet has something important to say to Darcy? The locations we used were absolutely stunning, but fate decreed that the main ones were almost invariably near the RAF or NATO base, and we had to do a bit of persuading of the various commanders that they wouldn't overfly at certain times and places. When we explained the situation they were consideration itself."

How are you. I am here for a purpose and that purpose is to grow into a mountain, not to shrink to a grain of sand. Henceforth will I apply ALL my efforts to become the highest mountain of all and I will strain my potential until it cries for mercy.
I am from Austria and learning to speak English, tell me right I wrote the following sentence: "Held every saturday from am to noon is the maui swap meet.What splurge on gorgeous summer shoes and handbags at edon manor end of season sale."

;-) Thanks in advance. Sidney.