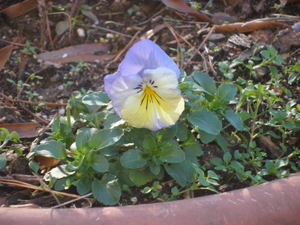 As I wrote last year, the week after Christmas is one of my favorites.  It's peaceful (usually) and quiet.  Decorations are still up, but they're just fun to see, not reminders of all the things I have to get done before Christmas Eve.  I've really been enjoying outside Christmas lights this year.

Lately, I've thought of various things to write about, but the writing hasn't happened.  Two posts which I didn't write, though I thought about them again while raking leaves today, were one about the nature of online friendships, and another about defining (in a practical sense) Christian community.  I came up with a number of things to say, but I don't have 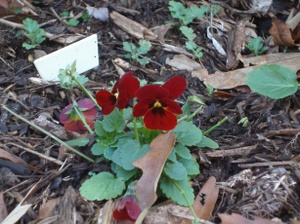 the... organizational drive right now to actually put the posts together.  This post will just ramble on a bit.

As I said, I love this week.  It's an oasis of calm before we get back into the busy-ness of normal life.

Younger son's birthday is in ten days so I did make a short (but non-rushed) stop at University Mall to pick something up.  I ended up talking to the guy who owns the Celtic booth that's been there during the Christmas season.  He plays bagpipes, and his wife makes kilts (one of which he was wearing).  They're lo 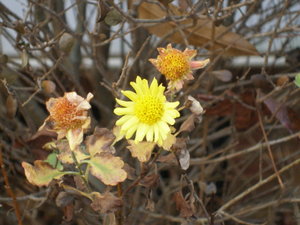 oking for a permanent place to put their shop, Celtic Wonders.  I recommended Hillsborough (grin).  They've got some beautiful things so I hope it works out for them.   He had long blond hair (longer than mine), and very ... alive eyes.  You know how some people just seem to be looking at, and interested in, everything? - that sort.

This afternoon, daughter and I had lunch, and a fun conversation, with a future homeschooler who wanted to discuss homeschooling for high school.  She's been talking to various people about it, and, apparently, the way that daughter and I work out, together, what she's going to be studying, is kind of unusual.  It's very natural to me.  I never got around to mentioning that even younger son picks his workbooks (from the ones that are appropriate for what he needs).

In the winter and early spring, the deer come up from the natural area behind our neighbors's house and treat our gardens as a huge salad bar.  I've been sticking pansy plants back in the ground - the deer bite off the top and leave the plant lying* there.  There's one bush (right) in the back yard that is very oddly shaped because the deer ate every leaf on it last winter, then the top grew all summer. This afternoon, I sprayed that bush and all the backyard pansies with some (hopefully) deer repellent spray.  I guess deer don't like garlic or egg solids. 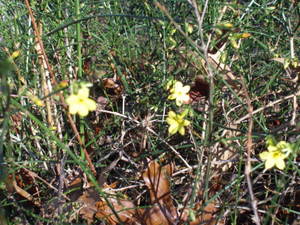 The pictures show what we've got blooming now - the two least bedraggled pansies in the yard (top), one very late chrysanthemum (middle), and the winter jasmine (right).  I'm glad that we've got anything blooming this time of year!

This evening, we'll drop by a New Year's Eve party at our friends' house.  They do this for neighbors and other friends, and it's nice to go relax and chat.  I've never thought much of New Years as a holiday (it's just one day more than the old year), but it works as a good reason for a fun evening (grin).  Older son is still off until next Monday, and dear husband is also taking the rest of this week off (and intends to do a lot of painting)(You can read his three posts about "What is art").

* Do you ever have to double check to make sure you use the right word here?  Check this webpage.