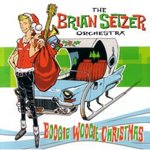 Like the songs, "Fever" and "Sooner or Later", there are lots of versions of this song that I like.  Kind of strange - all three are seductive songs, and that's the total opposite of me! (grin)  Then older son reminded me that I also like all sorts of versions of The Water is Wide so that breaks the streak. 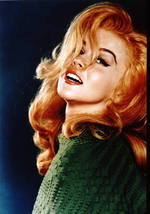 Here's one of the more re cent versions I've heard.  I got Brian Setzer's Boogie Woogie Christmas last year, and one of my favorite songs on it is this duet with Ann Margret (right).

From the Wikipedia article:

... a pop standard with words and music by Frank Loesser. Loesser wrote the duet in 1944 and premiered the song with his wife at their Navarro Hotel housewarming party. The female voice in the song is called "The Mouse" and the male "The Wolf." The lyrics consist of his attempts to convince her to stay with him at the end of a date; her indecisive protests reveal that although she feels obligated to go home, she is tempted to stay, partially because, as the title suggests, "it's cold outside." In at least one published version the tempo of the song is given as "leserado," a humorous reference to the composer's name.

Amazon clips (get a glass of water, or eggnog, and settle in):

Thanks to Ice Lee's Amazon List:  Baby, It's Cold Outside - The Best Versions which added about five to the one's I'd already found (he has more that I didn't use so check it out if you're ready for more!).

Here's one more video.  This one and the Montalban/Williams one were the only two where the singers acted the song.  Ann Miller, Fred MacMurray, and Dinah Shore performed this on the Dinah Shore show in 1957.

[There are so many beautiful pictures of Ann-Margret on the Internet.  This one is from LTHForum: the Chicago-based culinary chat site, from a chat named "I like Swedes."  It's right before a discussion about rutabagas, which is part of the reason why the only part of Scandinavian cuisine I'll mention on my blog will be baking!]