What Would Barbra Do?: How Musicals Changed My Life 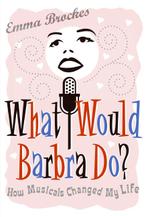 All musicals are concerned with closing the gap between who we are and who we want to be; the good ones acknowledge the shortfall. (p. 245)

If you love, or even merely like, musicals, you've got to read this book!  I read it a few weeks ago, and then I started going through it again before bringing it back to the library, and I ended up reading the whole thing again.  That almost never happens with books.

It's a (sort of) autobiography intertwined with her view of musicals.  She describes her early dislike of the musicals her mother loved, how she grew to love them too, and, poignantly, how musicals affected their relationship.

That sounds way too dry, however.  Here's a wonderful quote about an interview she did with Julie Andrews:

From a purely journalistic point of view it is never a good idea to interview someone you have an interest in persuading to like you. This isn’t usually a problem; most people above a certain level of prominence are mad as bats. (I recall Jane Fonda describing how the vestibule of her apartment had been designed to look like the female reproductive system.) If Julie Andrews belonged in this category, however, I couldn’t see it. What I saw was Poppins, barely – sinisterly, some might say – changed since she leaned out of the window and sang “A Spoonful of Sugar” to that mechanical robin...

I had intended to ask lots of searching questions about her allegedly difficult marriage to the director Blake Edwards. But each time I turned down the slip-road in that direction, I was flagged down by outriders from my own subconscious screaming “What? You’re going to insult Julie Andrews? After all these years? Julie Andrews? After she reunited the Banks family and defeated the Nazis? Have you totally lost your mind?”

And so I spent most of the forty-minute interview pursuing exclusive angles on just how great she was.

When it was over Andrews gave me a hug and I returned to the office. I sat down at my desk. I logged on to my computer. Then I cleared my throat and made an announcement. “I need you all to know that the last person I hugged was Julie Andrews.”

A neighboring colleague picked up the phone, punched in an internal number, and barked, “Get up here, NOW.”

They rose as one and, without saying another word, formed a small queue beside my desk. I rolled up my sleeves. “What’s this?” said a passerby on the way to the printer.

“Last person to hug her was Julie Andrews.”

If life were a musical, it is at this point that the room would have transformed into a place of magical possibility: the obituaries desk would have thrown page proofs in the air singing “It’s So Fab to Be on the Slab!” The tea trolley would have sailed in, scattering confectionary, while a chorus of leading left-wing thinkers sang “Could This Be the End? (of the Public Sector As We Know It).” I dispensed small, heartfelt hugs until we judged the magic Julie dust to have run out and our spirits exhausted. Then we sighed and went back to work. (pp. xii - xiv)

Her opinions don't necessarily match up to mine.  Two musicals that I love are fairly far down on her list.  She doesn't care for Rent.  Alhough she liked the stage version of Phantom of the Opera:

Personally I think it's about the importance of not judging people by appearances, although the moral is undermined somewhat when the Phantom goes on a killing spree after being turned down for a date by Christine. (p. 192)

she couldn't stand the movie (it's one of her bad/good musicals):

I was rooting for the Phantom over the wimpish Raoul, that is until his mask came off and as he cringed and cowered, the camera zoomed in. His horrific scar was no worse than a blister aggravated by what looked like bad sunburn. I suppose the makers of the film calculated that anything more gruesome would jeopardize its family rating. But the whole thing fell apart then and kept nosediving until the scene in which Christine sees herself dressed as a bride and keels over, Raoul tells her this man, this thing, is not your father, they fall through a trapdoor into a pool of water, where the poor old Phantom chases her around a bit and Christine kisses him, bringing on his long overdue breakdown, he realizes that she can only pity, not love, him, then he goes mental at her, next thing you know they’re in a graveyard with snow, rose petals, a stallion, some candles, and a reprise of the title song.  (p. 193)

On the other hand, she loves Neil Diamond, and I kept trying to understand why.  She also loves Carousel, which has a few good songs, but which, the second time I rented it, I never finished (also almost unheard of). I end up disliking the male lead too much.

Her chapters also have enough variety to keep you reading.  Some are just about one musical - including one chapter, "The Worst Musical Ever." (no, I'm not telling you which one)  Other chapters survey a type of musical or musical experience (including "Men Who Hate Musicals," "How to Make Men Love Musicals," and "Getting the Joke").

I'm going to put a few quotes up from the book over the next two weeks.

And to think, while you were putting this enlightening and uplifting post together I was writing mine about urinals... No synchronicity tonight.

Ha ha! I just just just posted about the Julie Andrews interview and Carousel! I didn't match all her tastes either, but I can't wait for her to write more. I hope she does.

I hope she does too! This was a wonderful book.

This book sounds like lots of fun. What is your favorite musical? I think mine is Les Miserables, althoug I still have a nostalgic soft spot for my first musical memory, Oklahoma.

It's hard to choose since there are so many I like. Les Miserables and Phantom are contenders, along with The Mystery of Edwin Drood. But I also like Cats, and My Fair Lady, and Oklahoma (which I saw on Broadway when I was in college), and She Loves Me... I can't decide!

This sounds FABULOUS! Thanks for the rec!

You're welcome! I hope you enjoy it!