Home Archives Profile Subscribe
Terms not to use
"Think of musical comedy, the most glorious words in the English language!" - Julian Marsh, 42nd Street

If you don't know me well, you probably don't know I have a very bad temper [Later note:  I guess it's more of an average temper (dear husband says), but I'd rather not have a temper at all so I feel like it's a bad one].  I keep a tight rein on it (well, most of the time) because I don't believe in taking it out on people.  I remember making a decision, around the time we moved into this house, not to yell at my children anymore - one of the few resolutions I've (happily for all) been pretty much able to keep.

When I do get mad, I usually clean.  It's a way of getting rid of excess energy, and of not blowing up at people while I do so.  We joke that the house gets really clean once a month (of course, there are times that I clean when I'm not mad, and then everyone gets worried that I am!).  The other thing I do is to exercise - go out and take a stamping walk around the neighborhood or go and throw myself into aerobics - pushing myself so hard that I can't really think about what's bothering me anymore.

Dear husband has, what looks to me, an easier temper.  He flares up and calms down quickly.  It takes more to make me mad, but it also takes a lot longer for me to calm down.   This morning, I had been mad at someone for a week, and I hadn't been able to get over it.

[Note:  I usually don't write too in-depth about faith and my relationship with God because I don't want to sound preachy, but this post ended up the way it ended up.]

I really had little interest in going to church today, but I won't be going the next few weeks (unless I make it to a daily Mass) so I decided to go anyway.  Before I went in, I said a small prayer giving my anger and the situation to God because I didn't really know what to do with it ("And, please don't let me take it back again!  Amen").  I don't like being angry at people, and, if there's one thing I could change about myself, it would be to be more patient and to have less of a temper.

We always get there 45 minutes early because older son is in the choir.  I didn't go for a walk because it was already getting hot so, instead, I took two of my current books and went to sit in the nave and read.  It's a beautiful wood and window filled space.  At one point, when no one else was in there, I put my book down for a few minutes and just drank in the sunshine and the peace.

The service was beautiful, as always.  Father E made a good try at explaining the Parable of the Dishonest Steward (Luke 16: 1 - 18), but it's a hard one to preach about.  There was a blessing of pregnant women during the service, and a couple in the choir had brought their very small, new baby girl. I was reminded of 20 years ago when I was pregnant with older son, and I looked at him over in the choir, looking very almost-20-years-old.  Somewhere along the way, the years started to speed by.

I realized, during the Eucharistic prayer, that at some point in the service, my anger disappeared. [and this is the part that's going to sound preachy and even maybe Hallmark-cardy, and I apologise, but it's the way it happened, and it's the point of this part of the post.]  God had somehow replaced the anger in my heart with forgiveness - for which I was very grateful. 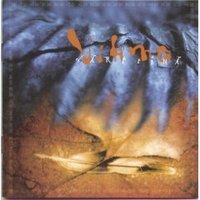 What does Laulutytto have to do with this story?  Absolutely nothing! -  except that I got back in the van feeling very happy, and Laulutytto was the next song on the tape we were listening to.  Its upbeat, bouncy nature went along with my mood.  It's from my favorite Varttina (Finnish folk group) CD, Vihma.

The album notes say the words translate, roughly, as

Shall we dance and sing?
The house is packed the tables are loaded
with brimming jugs of ale.
Let's drink up and moisten our mouths with brew.
I can't hold back, I'm a born singer.
What made us gather here tonight
to sip a dram and sing a tune or two?

Posted at 04:37 PM in Faith, Music: The Soundtrack in My Mind - Individual Songs | Permalink | Comments (2)

See I've known you for how many years now and I didn't know you have a temper! Amazing.

I appreciate your post and don't mind at all if you preach!

I too have been struggling with a difficult situation (with a friend) for about a month now and need to Let It Go bigtime. So your post encouraged me!

After thinking about it, I amended my post. I'd rather not have a temper at all so the one I have seems bad, but it's probably more about average.

I'm glad my post helped - sometimes it's easy to get all tied up in a situation. Letting go is not easy!