Home Archives Profile Subscribe
Friday Fun Song: Christine Lavin's "Getting in Touch With My Inner B..."
For Older Son (and Anyone Else Who's Interested)

Festival for the Eno 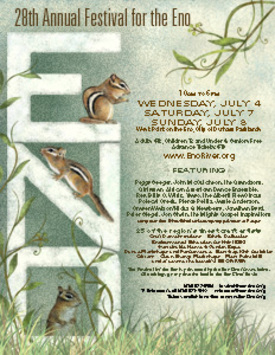 I'm exhausted today.  It's been a really busy week, and I knew this ahead of time which is why I didn't go to the Festival for the Eno last weekend.  I had really wanted to - because it's fun and, in particular, because I wanted to hear John McCutcheon and the Pratie Heads sing.

Every year the Festival for the Eno has a neat design for their poster and for t-shirts.  I really like this year's chipmunk design so I asked older son to get me a t-shirt.  He did; I'm wearing it.

To see more posters, click here.  My favorite of all of them is the southeastern five-lined skink poster (below, left)   I have two t-shirts of this one. One shirt is worn and fit only for gardening. The other is in far better shape because I only wear it on special occasions.  If I wear it in Durham, I often get people asking how I got it since it's a popular one, and they don't sell it anymore.

Older son brought the camera so I could vicariously (and
in air-conditioned comfort) enjoy parts of the festival. 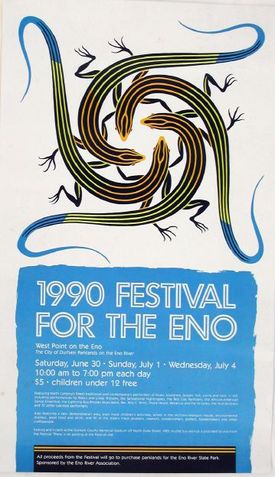 Every year "Sandy Feat" makes a sand sculpture during the Eno Festival.   Since older son was there on the last day of the Festival, he was able to get pictures of it all finished.  A chipmunk theme, of course.

This year's sculpture is also one of my favorites, and we did get a chance to see it.

Younger son has been in a great camp all week, and two days of it were spent at the West Point on the Eno Park so we were able to go take a look at the sculpture.

Younger son had a very bad experience a few years ago with a class.  Although he was initially excited about this camp (learning about nature in various Durham parks), by last week, he was nervous about the camp.

The teacher is great and really wonderful with kids (all three of my kids have had classes/camps with her) so I told him he should give it a try for a few days.

This camp turned out to be all boys, and they made friends very quickly.  When I picked younger son up the first afternoon, he said he didn't want to miss a minute of camp.

I was so happy with how it turned out!

Back to the sand sculpture. 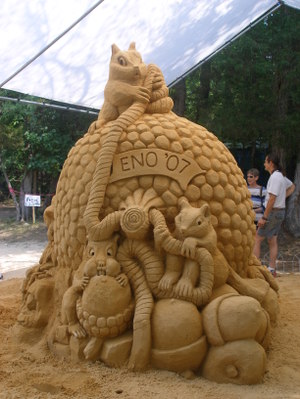 I particularly like this little reading chipmunk who is easy to overlook. 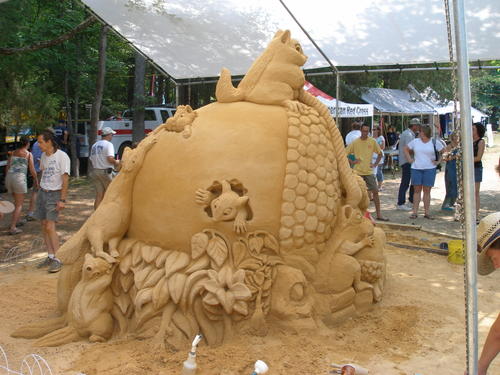 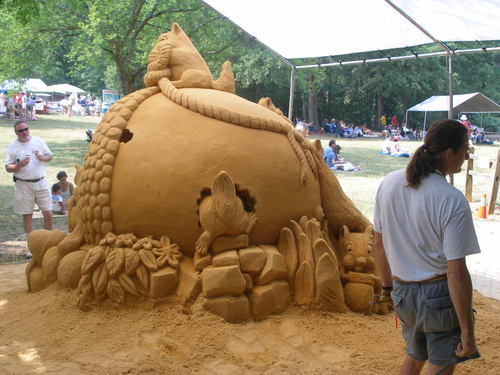 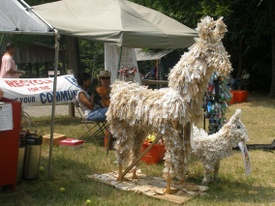 Environmentalism is a major feature at the Festival.  They try to have as little garbage thrown away as possible and also encourage recycling.  Here's a mother and baby  llama made out of shredded plastic bags (left). and a gator made out of tires (below). 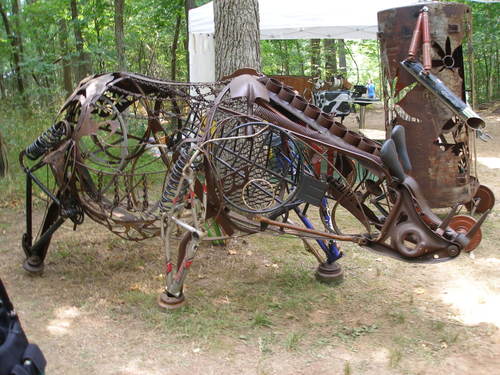 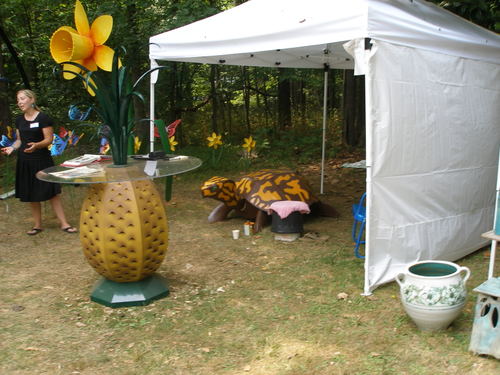 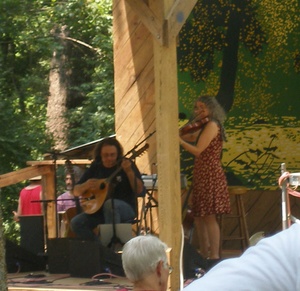 The Pratie Heads.  We were fortunate to get to hear them last year when they were playing at Foster's Market.  We were going to listen for just a short while, but we enjoyed it so much that we stayed until we were finished (and even active younger son listened!).

To read her impression of the Festival (and the heat), click here. 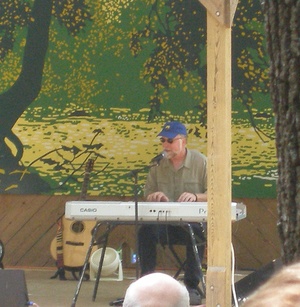 John McCutcheon has been one of our favorite folk singers for a very long time.  I'm not much for the usual saccharine, children's music - but his music isn't like that!  We often played two of his children's albums (Mail Myself to You, and Howjadoo) as our older two were growing up (and someday, when I get a new record player, younger son can listen to them).

I've sung a number of them as bedtime songs for years - including Rubber, Blubber Whale, Over in the Meadow, and All God's Critters.

His songs for grownups are good too - for instance, Water from Another Time (from Gonna Rise Again).

These two children's albums have been out since the early 90's so their earliest listeners are grown up now.  While introducing a song, he related the tale of a date his son went on.  Near the end of the date, she asked him (the son) if he was related to John McCutcheon.  He considered lying, but told her that he was.  "All of a sudden, she turned into a seven year old girl:  'I love that song, "Remember the seed in the little paper cup.  First the roots grow down and then the plant grows up"'  She sang the whole song!*  I wasn't sure I was going to be able to kiss that mouth!"

My son really enjoyed the performances and the day - and he doesn't usually enjoy being outside in the hot weather!

* Kindergarden Wall from Mail Myself to You.