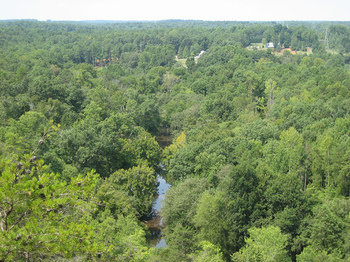 It was cool (in the 60's) and cloudy when we got up this morning so older son and I went for a hike at Occoneechee Mountain.  It's nice to have someplace to hike that's only 5 minutes away - and at 867 feet, even if you wouldn't really call it a mountain, it's the closest you'll get in the Triangle.  I forgot to bring the camera so I don't have any of my own photos, although I've got links to lots of other peoples'.  This photo of the Eno River taken from the overlook  is from Shadle's Flickr Photosets (you can view more of his Occoneechee Mountain photos here).

The hike around the mountain is not that long so we also took a couple of side trails.  We started out hiking the gravel road up to the top where there's a radio tower and a fire tower.  We hiked back down to the moutain loop to find that the overlook is still closed. The overlook is built on the top of a cliff from an old quarry.  After a rockslide in February, 2001, they closed the overlook, although from the caption on this photo, it looks like they aren't really taking that seriously anymore.  You could also tell that no one pays attention to this by the fact that there isn't anything growing in the path leading down to the overlook.  We followed the sign, however, and looked at the view from a distance.

The interesting part came as we went back down.  First we took a side trail that we hadn't ever taken before and saw the quarry from further down.  Then, we took a yellow blazed trail which went down the mountain, and then split in two.  We took the right hand trail, but realized that, although it was obviously a used trail, it had no trail blazes, and we had no idea where it was going.  I think, from some things I've read, that eventually it probably will hit the Eno River and head into downtown Hillsborough.  After awhile, we  realize that we were probably well out of the park so we headed back to the top (getting hot and sweaty even though it wasn't that hot out - but it was humid) where we took our usual trail back around.

I've looked at two different maps and haven't been able to find the unblazed trial.  It was fun to try something new that close to home.  No, wait.  I found it - the Tredennick trail on this map.  It's the one that says "Existing trail (to be closed)."

The north side of the mountain is cooler, wetter, and shadier than usual in this area so many plants (such as galax, Catawba Rhododendron and Mountain Laurel)  normally found only in the moutains grow here.  We need to take a break from gardening and make sure we come back when they're blooming next spring.

There's more information on the park at Trails of NC, the Eno River Association, and Hiking Occoneechee Mountain.  The latter includes a page of photos from a balloon flight.  The park includes part of the mountain and those two ponds - all right next to I-85.  When you're driving in on the dirt road into the park, you're driving right next to the southbound lanes of I-85.  Landon Whitt's Occonechee page also has more photos and information.