"Asking Us to Dance" - Kathy Mattea

Yesterday there were so many things I could have blogged about - our day at the museum, dancing to West Side Story at Theater Dance class, the homeschooling group meeting discussing high school - but, by the time I got home and took a shower, I was too tired to write about any of them.

So, on to something completely different.

Overall, I've never been much of a country music fan.  But, in the 90's, country music seemed to open up for a brief while and so I listened - to singers like Mary-Chapin Carpenter, Pam Tillis, the Tractors, and Kathy Mattea.  Country music seems to have closed up again; now, whenever I try to listen, it all sounds like 70's pop with a twang and a hat.  But I still like these singers. 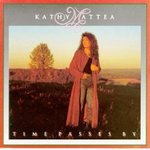 Time Passes By is my favorite Kathy Mattea CD - not surprisingly since it shades off into folk (particularly with the inclusion of Scottish folk singer, Dougie MacLean's Ready for the Storm).  My favorite song on it is "Asking Us to Dance" which has been playing in my head a lot recently.  It's a sweet, romantic song - well, here, just listen.

[I don't generally care for music videos.  To me, paying attention to the visuals detracts from the attention I can pay to the music.  But, since I only have this album on tape, here's the video from YouTube.  Actually, the video is kind of sweet too.]

This song, of course, is for dear husband.

"... and all the things on earth worth having
Are things that we've already got"

Posted at 03:03 PM in Music: The Soundtrack in My Mind - Individual Songs | Permalink | Comments (2)

Oh my, we're doing more PDA. Somehow it adds another dimension to our romance to sweet talk each other this way through the blogosphere.

"Darling tonight I am reminded how much these two hearts need romance/
You know it isn't all that often we get this kind of chance/
Why don't we get caught in this moment be victims of sweet circumstance/
Tonight I feel like all creation is asking us to dance."

"Be victims of sweet circumstance"

I always think of all the moments when we've been overtaken suddenly, caught in the long sheltering shadows of what we've built together, and how in those moments our eyes shine.

I always think of our headlong rush the last few miles of trail to get to Cojay's before it closed, and the way we were like two kids that weekend, falling in love for the first time all over again.

"You know it isn't all that often we get this kind of chance" But it's often enough to savor the time until the next one. xxo