What I Didn't Say/"The One Who Knows" - Dar Williams

Obviously the two year old in the seat ahead of me had changed the subject to some sort of bin.  He was very cute, and his father was very gentle with him.  They ended up talking to the gentleman two seats down from me.  Normally, I would enter into the conversation - anyone can join a general one in a waiting room, particularly in Hillsborough - but I was trying very hard to concentrate on my book, "bin" or not.  And what I wanted to say, while watching that sweet little guy with his gentle father, was too personal so I didn't say it.

Not that I needed to concentrate too hard on the reading for reading's sake.  It's a good book, but I read it already - 21 years ago, shortly after it came out.  Timothy Zahn's Heir to the Empire is a Star Wars book from back when movie tie-ins were still rare.  Daughter read it recently and recommended it to me.  When I started it, I realized that I had read it (long ago in a house far, far away...)(not really) back when we weren't even sure we'd ever have children.

The gentleman two seats down had a two year old granddaughter:  "It's almost impossible to keep up with her!"  The father said that the little guy had an older brother, and the two of them keep their parents busy.  I dove back into my book, not saying what I wanted to say.

Enjoy every minute you can, because someday you will be trying very hard to reread a book recommended by your  daughter, who wasn't even necessarily a possibility (at least in your mind) when you first read that book.  And you'll be trying so hard to concentrate on your book so that, except for the occasional prayer that things go well, you don't just worry while you sit there for half an hour waiting while your son takes his first driving test.  Enjoy every minute because you'll be amazed at how quickly they grow up, and how their toddlerhood doesn't seem that long ago.

But, we're listening to a Dar Williams CD, Beauty of the Rain, and, coincidentally, the exact song 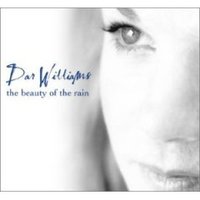 for this post came on.  This song always makes me cry.  What amazes me is she wrote it before she had a child.

Time it was I had a dream
And you're that dream come true.
If I had the world to give
I'd give it all to you.
I'll take you to the mountains,
I will take you to the sea.
I'll show you how this life became a miracle to me.

Chorus:  You'll fly away, but take my hand until that day.
So when they ask how far love goes
When my job's done you'll be the one who knows.

All the things you treasure most
will be the hardest won.
I will watch you struggle long
before the answers come.
But I won't make it harder,
I'll be there to cheer you on.
I'll shine the light that guides you down
The road you're walking on.

Before the mountains call to you,
before you leave this home,
Wanna teach your heart to trust
As I will teach my own.
But sometimes I will ask the moon
Where it shined upon you last
And shake my head and laugh and say
It all went by so fast.

Older son hasn't been at all interested in getting his license, and it's not been a big deal for us that he hasn't - which is why he's reached 19 without one.  For practical reasons, it was time, though.  Congratulations, older son, even though you may not be all that thrilled.*

* He says he's thrilled not to have to take the test again.