After going to see Shrek the Third, we went out for lunch at one of our three favorite places to eat in Durham (the other two are The Mad Hatters Cafe and the Pizza Palace) - Mellow Mushroom pizza at the American Tobacco Historic District (to be known as ATHD).

ATHD has been renovated from the old American Tobacco Company buildings in downtown Durham.  The company was founded by James Duke (as in University) in the late 1800's, and the Amercan Tobacco complex was soon built.  Preservation Durham has a good article on the history of the buildings and redevelopment   (Interesting and brief Duke family history here).

Every time we get pizza at the Mellow Mushroom, we also walk around ATHD - regardless of the weather.  It is so interestingly put together.  The courtyard between the buildings, which used to be a parking lot, has been redone with grassy areas, planters, a stream, a waterfall, and a small stage.  There is a free Friday concert series, Music on the Lawn, during the summer.  There's plenty of shade so it's never oppressive to walk around.

We recently enjoyed Everyone's Hero, an animated baseball movie (I don't mind baseball as long as I don't have to play it).   ATHD is right next to the Durham Bulls baseball park - so while we were eating pizza, we decided to go to a Durham Bulls game sometime this summer.  We went to one years ago before younger son was born. 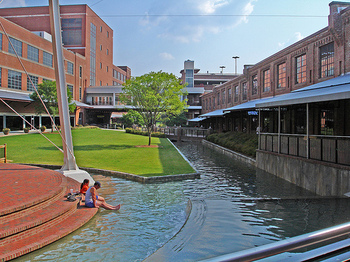 I didn't bring my camera, but I found lots of good photos of ATHD on Flickr.  The one to the right is from bunchofpants photostream.

Here are some links to other ATHD photos:

And here's a link to mushrooms outside the Mellow mushroom.  We like to park in the little gravel lot across the street under the highway.  We're easily amused.

More on ATHD and Durham: