Home Archives Profile Subscribe
What I Didn't Say/"The One Who Knows" - Dar Williams
Gardens - May 11, 2007

"Living for the City" - Stevie Wonder and Ray Charles 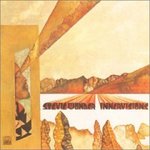 I was wandering around YouTube early this morning (check the time of the post), and I ran across this song.  It's one of my favorites off of one of the first albums I ever bought back in middle school.  I liked the jazzy rhythms of Innervisions by Stevie Wonder (still considered one of his best, and possibly his best, albums.  It won a Grammy for Album of the Year in 1974).

They're all good, but some particular favorite songs are:  Too High,  Higher Ground, Don't You Worry 'Bout a Thing, and Living for the City (Grammy for Best Rhythm and Blues song in 1975), performed here by Stevie Wonder and Ray Charles (who's always wonderful to listen to!):

Posted at 01:19 AM in Music: The Soundtrack in My Mind - Individual Songs | Permalink | Comments (0)