I had insomnia again until 4 am last night.  There were a number of things bothering me, including my asthma problems which are getting really frustrating.

Dear husband very kindly stayed up part of the time to listen to me.  At one point, he summed up a number of recent interactions that were bothering me - they were all times where I "let my guard down," and, felt, well, run over (for various reasons).  My conclusion, after venting my frustrations with all of these occurrences, was that I needed to be more... well, not exactly hard-hearted, but at least not to let my guard down so easily.

This morning, I was in a really bad mood as we headed to church.  I was going partly because, between traveling and dance, I'm not going to be there much before the end of the choir season (in June) and mostly because of discipline.

I'd left the CD of Fosse in the van so listening to Sing, Sing, Sing on the way there helped (okay, and dancing along with it in my head since we've danced to it a number of times in Theater Dance.  Our dances were nothing like the video, though!).   The bachelor's buttons (scattered thickly through a field) which were waving in the wind along with the grass (the field on the south side of Old 86 - right before you get to Carrboro) also helped cheer me up.

The sermon today started out sounding like it was going to be a guilt sermon.  I put my guard up really fast - that kind of sermon hits me very hard (further thoughts on guilt sermons here).  But, it didn't turn out to be one.  It ended up being a sermon on how to follow Jesus - Who emptied Himself out and humbled Himself for us, Who is patient with us even though we fail Him again and again (story of Peter here), Who sticks with us even when we're unpleasant to be around.  And how following Him means that we need to stay open to others, to listen, not to close them off, to stay vulnerable.  Basically, though not in these words, not to put our guard up.

Even if we're misunderstood and get hurt.

In the middle part of his sermon the priest also talked about how everything is grace - everything we have.  This was a very familiar theme in Father C's sermons - I think partly because, due to his own health problems, he felt very much that he relied on God's grace.  It's not a theme that I've heard much since Father C retired, and I've missed it.

I'm not remembering all of today's sermon here, but there was also a bit at the end about the ministry of "being present" - which, to me, came across as "understanding and listening."  It's something I try to do, but which often doesn't seem valued in church situations.

I was very glad I went.  I'll be honest, keeping my guard up isn't all that easy for me.  I can do it, and often do, but it's not my default attitude.

After the service was over, I had a great conversation with a lady that I used to (sort-of) know when I went to the women's Sunday School class.   Although I enjoyed the class, I always had to walk out early to get to the 11 am service so I eventually stopped going (I got tired of feeling constantly rude).  Though they've changed the times, other things weren't going so well at church so I never went back.  Today I ended up thinking that maybe it's time to try going to it again.  That would be hard - but would go along with today's sermon.

I'll probably get over this idea by next fall.

The one disappointment was that the sanctuary wasn't very full today so we didn't get through all of the Communion hymns.  The last one was Love Divine All Loves Excelling which both older son and I were looking forward to singing.  Unfortunately we didn't.

At least we didn't sing it at church - we sang a bit of it on the way home, but we don't know all the words so we would belt out "Love divine, all loves excelling" then sort of drop down on "la la la la la la la."

I don't have a picture of the bachelor's buttons in the field, but here's another beautiful field on Old 86 closer to our house.  I love this part of the drive. 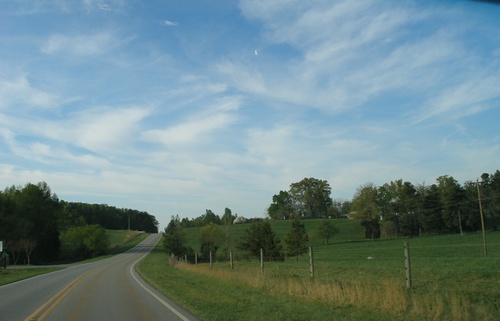 Driving your ds home last night we came up old 86 from Carrboro (since the first person we dropped off lives there). I told everyone in the car how much I love that same stretch of the road. It's best heading south don't you think, but still awful pretty coming the other way. :-)

We were heading home from the park & ride lot this afternoon, and the sun was beautiful as it was shining across those fields!

It is nice to hear "reviews" of sermons and services at which I was present, since often my mind wanders so far from the events at hand that I drive home only with a snatch of song in my head and the yeasty aftertaste of wine on my tongue.

I found this sermon extremely odd because the priest who gave it usually stands in the pulpit and reads, and on this Sunday he stood at the altar rail and extemporized. Also, his sermons tend to be rough-edged and categorical, and this was unusually gentle.

Hope your insomnia turns back to sleep.

I thought the sermon was unusual. I try not to write about every sermon I hear, but this one was the right one at the right time. I wish I'd written more about Father C's because my memories of them are fading with time.

Thank you for the insomnia good wishes.