Since the start of the regular January schedule, we've been disciplined - gotten all our homeschooling and work (my part time job is busy) done while dear husband has been travelling for part of each week, and through illnesses, wisdom teeth removal, etc.  I had cleaning and organizing projects planned for Saturday.

Two things interrupted.  I was looking for a picture of the rolling hills of Southern Virginia for an upcoming blog post and had a difficult time finding ones that showed what I was picturing.  And, dear husband posted his pictures from his Kentucky trip on his new weblog (Okay, I haven't mentioned the new weblog.  I didn't say that I was totally organized!).  Both these things started me daydreaming about a road trip - pack some food and good music, get in the car, and decide which way to turn when we leave the neighborhood.  Let whim/the universe/the Travel Agent/luck/whatever take it from there.

It's been a while since we had done a road trip - as our lives get busier, we have fewer free days.  Everyone was in favor so we took off yesterday morning and headed left (north) out of the neighborhood.

And here's what we ran across... 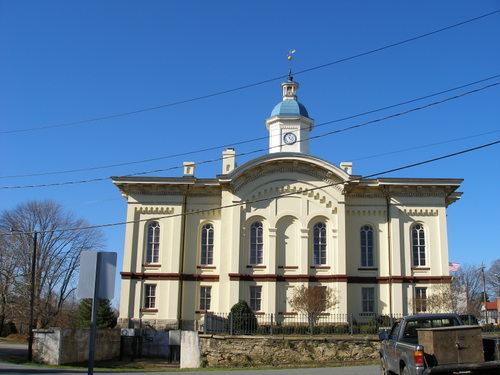 The Caswell County historic Courthouse in Yanceyville, NC (finished in 1861 and and restored in 1999).

We fell in love with the building, though it's difficult to get pictures of it without the wires in front (more pictures available in the Courthouse photograph gallery and slide show (including a picture taken from the roof, and one showing the tobacco leaf and corn detail from one of the capitals).

The historic (1868) United Methodist church on Main St. in Danville.  The lower building is connected to the church to the left. 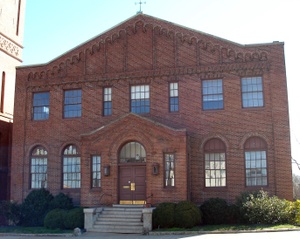 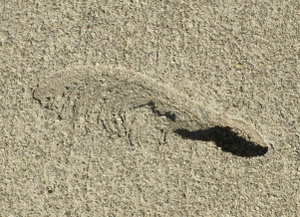 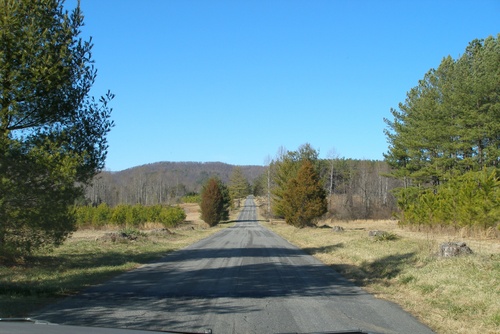 The rolling hills of Southern Virginia.

If you've ever lived in Winston-Salem, you are familiar with the Reynolds family.  Richard Joshua Reynolds built the tobacco company in W-S, and also had the Reynolda House (now an art museum) built for his family.  This is the Reynolds Homestead in Critz, VA where he grew up - with his 15 brothers and sisters.  One of R.J. Reynold's nephew's founded Reynolds Metals (makers of Reynolds Wrap).

The Homestead is on a hill overlooking the Blue Ridge Mountains.  It's a beautiful, peaceful spot, and we wandered around for a while.  The house is open for tours from April through October, but the caretaker asked us if we'd like to see the inside.   We took a brief peek, and it's beautiful inside also (slide show here).

View from the front porch. 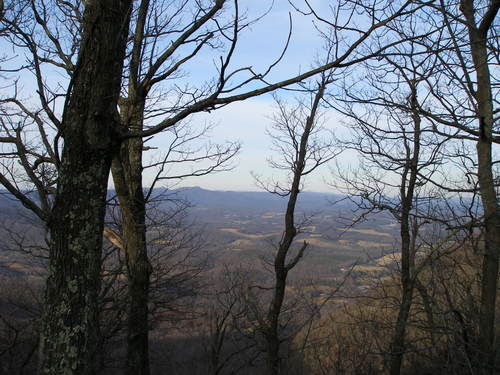 The view from "Lover's Leap" overlook on Route 58.

Ice on the mill race at Mabry Mill. Pilot Mountain at the end of the day.

GORGEOUS! And that frozen water? I'm glad we don't have that kind of cold. Brrr!

You got some great shots in Danville. The "sunday school" building at the UMC is now an arts hall where the local symphony rehearses. The church sold the building.

If you enjoy road trips, you should check out letterboxing. There is actually a letterbox hidden at that courthouse in Yanceyville. www.letterboxing.org

I looked up the Kirk-Holden war mentioned on the sign outside the Caswell County courthouse in Yanceyville. You can read more about it here . Fascinating story of the politics of the South after the Civil War, and how heavy handed handling of the first years of reconstruction resulted in a backlash.

Wow - what beautiful photos! I especially liked the maple seed in the concrete - don't know why. But they're all very, very good.

If you still want to host the THT, please email me and I'll send out a notice.

Thank you all! And thank you, Becca, for the information about the building (an arts hall is a good use!) and letterboxing.

Some of the pictures are mine,and some are dear husband's.