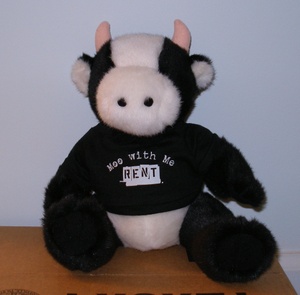 It's been a long time since I've been to a performance where the standing ovation started before the last song finished.  Last night, we were on our feet for the last line or two of the song.

The touring performance of "Rent" (at UNC-Chapel Hill's Memorial Hall) was fantastic.  Daughter said it was the stage performance she liked most.  I can't quite say that  since I have Broadway memories of seeing Yul Brynner in the "King and I" and Rex Harrison in "My Fair Lady," but I will say that last night's performance was in the top three.

The stage performance of "Rent" was grittier, simpler - scenery-wise, and more vivid (particularly in the choreography) than the movie.  I'm glad I saw the movie first - otherwise I would probably have been disappointed in the movie.  As daughter said, the movie "conservatised" (or was it "conservativised"?  I'll have to ask her in the morning) the play; it took off the rough edges and toned sections down.

The stage scenery was very simple - two balcony sections (one over the on-stage band and one with stairs to the stage), chairs, tables, and various props.  With its minimal staging and ensemble cast (rather than stand-out stars), it felt like the anti-Phantom (of the Opera - which focuses on three characters and has very complicated scenery).

That doesn't mean that the cast is second rate!  The cast was excellent - probably the best touring cast I've seen.  I wasn't sure how I would like someone else playing "Angel" since I liked the movie one so much.  Melvin Bell III did a wonderful job as "Angel," playing her in a much more girlish way (which worked well).  Chante Frierson played Joanne as a more sultry character than in the movie - which makes Maureen's attraction to her more vivid.

Speaking of vivid, the choreography for the stage musical is much more vivid than that in the movie - meaning it's definitely PG-13 (or 14...).  I probably wouldn't have taken daughter to it a year ago (and she was one of the youngest people there).

After the standing ovation and the bows, the house lights went up, and the audience started leaving.  The on-stage band was still playing (jamming is probably more the word to use).  They were great too so we stayed, listened, and applauded them again when they finished.  There weren't many people left by that time, and I think we clapped the longest (We got a wave from the pianist/leader).

Daughter got an early birthday present of a Rent t-shirt, and we also bought little "Moo with me" (pictured).

Video links (of course!)(not with the cast we saw, however):

Rent preview which gives a good feel for the play (Krystal Brown, who played Mimi last night, is also this flexible a dancer).

Additional non-professional videos at Flitting Through the Internet.