This is my favorite week of the year.  It may even beat the weeks we spend in the mountains in the fall, and the weeks when the dogwoods bloom in the spring.  It's a good week, even though the pansies are the only things blooming (but it's been warm so they're doing well).

I love the week between Christmas and New Year's because there's still a bit of Christmas spirit left over without any of the stress.  No dance, no work (older son and I took this week off), no choir (Hmm.... I hope there was no choir!).  I did teach aerobics on Wednesday, but it was a small class.  It's the most peaceful week of the year.

Younger son and I walked around this evening after dark to look at lights one more time,  read a children's version of A Christmas Carol, and then just snuggled on the couch and looked at the tree.  I never have time to just sit and look at the tree before Christmas. 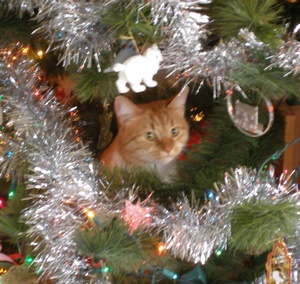 The tree's got to come down this weekend because the cats are enjoying it way too much.
Younger son:  "Mommy, here's a branch on the floor, and those things we wrap around the trunk."
Me:  "Just leave them on the floor because the cats will just try to get them off again."

I'm also allergic to cats.  Claritin is my friend.

Back to today... I'd done all the cleaning I intended to do earlier this week.  Bills were paid.  Laundry done.  We had a game morning this morning.  First we played a few rounds of Kerplunk for younger son's sake, then the older two and I started a long game of Trivial Pursuit.  We finally quit at 1:30 for lunch.  I won, but only by one point (Did you know that Martin Van Buren was the first U.S. president not to have been a British citizen?  Neither did we.).

It was a lovely afternoon to go to Maple View Farm to get ice cream.  It's the first day in a while that we've all been free to go there - usually there's either work for older son or dance for daughter.  Maple View is out in the country.  Their front porch is lined with rocking chairs where you can sit and look out over the rolling fields while eating ice cream (photos here).  Since it was a warm holiday week day, there were lots of people out biking.  A few stopped by for ice cream.

This weekend will be my favorite church service.

Yes, even more favorite than the Christmas Eve service with all the wonderful singing, and all of us there together with my mother.  I've gone to church by myself so much this year that I'd forgotten how it felt to all go together. I'll be honest, I got teary, especially when we held hands to pray together after Communion.  It had been so long since everyone went together that I'd forgotten we did that.

And even more favorite than Easter with its joyous "Jesus Christ is Risen Today!"

It's probably because this service is as close to the feel of a daily Mass that a weekend service can get.  In our Episcopalian church, the Sunday after Christmas is usually a rather calm small service.  Instead of a sermon, there are "Readings from the tradition" - Christian writings from centuries ago.  They're the sort of writings that most Catholic parishes stopped talking about after Vatican II - part of throwing the baby out with the bathwater.  One of the things I like about the Episcopalian church, or at least our parish, is that they still read and pay attention to these writings.

This service is also usually small, attendance-wise.  Sometimes there are so few people that the priest invites us all to come up and stand around the altar during the consecration.  A small, intimate service.  It's beautiful.

Even though I've got all sorts of newer music, this week, I've been playing some of the first folk CD's that I ever bought:  Maura O'Connell's "Helpless Heart" (came out in 1989), John Gorka's "Out of the Valley" (came out in 1994), James Keelaghan's "Road" (1999), Mary-Chapin Carpenter's "Party Doll" (1999, but they're all older songs), and the Indigo Girls' "Swamp Ophelia" (1994).  They somehow go along with the calmer feel of this week - like spending the time with old friends.

That does sound like a lovely week. Happy New Year!