After seeing Hugh Jackman as a flamboyant entertainer in clips from the Boy from Oz, 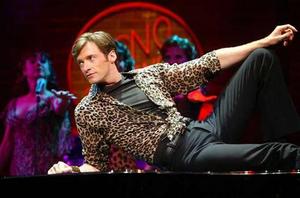 a proper member of the nineteenth century British nobility in Kate and Leopold, it was quite a change to see him as Wolverine in X-Men.

Before watching the movie, I knew very little about X Men besides the basic premise and that it was Patrick Stewart's latest movie franchise.  Dear husband and our two older children have been reading the X Men books so they were eager to see the movie (it was too violent and intense for younger son to watch).  It was pretty good - though the Netflix DVD pixelated ten minutes from the end so we had to wait a few days to get another and finish it.

Next on our Netflix queue is Charade, with two of my favorite actors, Cary Grant and Audrey Hepburn.  We've been on a bit of a Cary Grant kick lately.  Recently, we've seen North by Northwest, which, surprisingly, made younger son decide that Alfred Hitchcock was his favorite director.   Also, in the last few months, we've watched The Philadelphia Story, His Girl Friday and Notorious.  In the last few years, we've watched Operation Petticoat, Father Goose, Houseboat, To Catch a Thief, Bringing Up Baby and Holiday.  As I said, he's one of my favorite actors.

That's also why it can take us years to see newer movies - since we spend so much time watching older ones.

We've also started getting into some of the old TV series that they're now releasing on DVD - things like Columbo and the Rockford Files.  Coming up on our queue, is a series from the late 60's that I was amazed to find on DVD since it only lasted for two years, and I've never seen it in syndication. 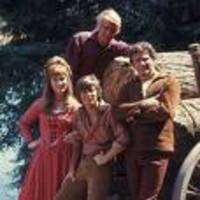 Here Come the Brides was a show set in the 1880's about three brothers who bring 100 women to Seattle so that the loggers can find brides.  The dramatic tension (what there is of it) comes from their bet with the sawmill owner who finances the venture - if any of the brides leaves or does not marry in a year, they will forfeit their mountain.

I remember it rather fondly (if campily) so it will be interesting to see how it held up.  If you want to know how much useless music there is in my head, I can still sing part of the theme song, even though I haven't seen the show since it was originally on:  "If you find your own true love, you will know him/ by the smile and the look in his eyes..."

The sawmill owner was played by Mark Lenard who also played Spock's father on Star Trek.   Years ago, I read the Star Trek novel, Ishmael, and, a few chapters into it, was amazed to find that Spock had been dropped into "Here Come the Brides."  Barbara Hambly is an excellent author, and she actually manages to pull it off and make a good Star Trek novel out of it.   The show itself never came to a conclusion - it just ended.  Barbara Hambly concludes it very well, giving closure to those of us who have been waiting for decades to find out what happened.