Home Archives Profile Subscribe
"I am Kirk"
Have a good weekend!

(Tagged by DF of Breakfast With Pandora)

ONE BOOK THAT CHANGED MY LIFE:

Dread Companion - Andre Norton.  A good, but not great, science-fiction/fantasy young adult novel.  I read it for the first time in 7th grade.  Before that, I'd loved reading, but most kids books back in the 60's and early 70's were everyday stories.  There were many good ones (Beverly Cleary, Elizabeth Enright, the Betsy-Tacy books), but I read and reread all of the fantasy authors in the children's section - and there weren't that many (C.S. Lewis, Madeleine L'Engle, Edward Eager, E. Nesbit).

Dread Companion was the first science-fiction type book that I'd read - and it opened up another whole new world.  Even the children's fantasy had mostly straight-forward settings - magic and princesses, talking animals, etc.  But Dread Companion had a whole new type of imagery - and I was hooked.  The scene I couldn't forget was when the main character, an ordinary person who is undergoing a transformation on an alien planet, took off her boots and:

My feet!....they were not as I had always seen them either.  The toes were longer, thinner.  They appeared to uncoil, to show an extra joint on each as I released them.  And they were far more prehensile than any human toes should be.  These new, flexible ends curved down without my willing it and dug into the soil.

And throughout my body I felt a shock, as if those toes, in so sinking into the ground, had encountered therein source of energy that flowed back through them up my legs, into my body.  I jerked them free, tyring to force on my boots again.

ONE BOOK THAT I'VE READ MORE THAN ONCE 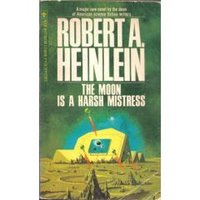 The Moon is a Harsh Mistress - Robert Heinlein.  Although it's not his most well-known book, I think it's Heinlein's best.  Writing-wise, it comes between his earlier more adventure-focused novels, and his later novels which start focusing more on social situations.  It has enough of his politics to be Heinlein, but it doesn't overdo the politics like some of his later books.  The bare bones plot is that it's a revolution on the moon.  But, what makes it interesting is the whole society which has developed on the moon, and the characters involved in the revolution.  Mike, one of the two main characters, is one of my favorite characters in any story - book, movie or otherwise.

It's one of the books I recommend most often to people.


ONE BOOK I WOULD WANT ON A DESERT ISLAND

From Dawn to Decadence:  1500 to the Present, 500 Years of Western Cultural Life - Jacques Barzun.  800 pages of excellent writing about the cultural achievements of the last half-milennium.  I've really enjoyed everything I've read of his.  And, if I were on a desert island, I'd actually get around to finishing this one!


ONE BOOK THAT MADE ME LAUGH

Oh Susannah - Kate Wilhelm.  I've also enjoyed everything I've read of hers, whether it's science fiction, suspense, lawyer drama or mystery.  This is her only humorous one - involving a cross-country chase, a mysterious suitcase, an amnesiac, and the son of a children's book writer trying to escape his past.


ONE BOOK THAT MADE ME CRY

Every year, when I read The Littlest Angel to whatever young child is around (or whatever older child who wants to listen), I always cry at the end.  They're used to it.

ONE BOOK I WISH HAD BEEN WRITTEN:

Before he passed away, my father had been working on a cold-war espionage novel (which had to be changed once the iron curtain fell).

ONE BOOK I WISH HAD NEVER BEEN WRITTEN
I'm tired of hearing about the Da Vinci Code. 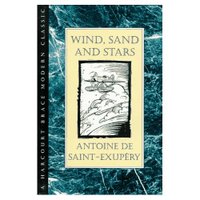 Wind, Sand and Stars by Antione De Saint-Exupery.  I briefly mentioned this in a library post a few weeks ago.  It's a book to savor, not to gobble down.  He writes about being a mail pilot in the late 1920's and early 1930's.  Not my normal subject matter, but I have the feeling that an excellent writer can get you interested in anything.  And his writing is beautiful; here he's describing help a veteran pilot gave to him when he was starting out:

But what a strange lesson in geography I was given!  Guillaumet did not teach Spain to me, he made the country my friend.  He did not talk about provinces, or peoples, or livestock.  Instead of telling me about Guadix, he spoke of three orange-trees on the edge of the town:  "Beware of those trees.  Better mark them on the map."  And those three orange-trees seemed to me thenceforth higher than the Sierra Nevada.

He did not talk about Lorca, but about a humble farm near Lorca, a living farm with its farmer and the farmer's wife.  And this tiny, this remote couple, living a thousand miles from where we sat, took on a universal inportance.  Settled on the slope of a mountain, they watched like lighthouse-keepers beneath the stars, ever on the lookout to succor men.   (Chapter 1)

ONE BOOK I'VE BEEN MEANING TO READ

The Universe and the Teacup:  The Mathematics of Truth and Beauty by K.C. Cole.

Emily at All Right Here
Jennifer at Sob'ah My Soul
Rachel at Green Cathedral
And, though this may not work, Nigel Tangelo (who hasn't been seen since the spring, but who is wandering somewhere around Hamjamser).


Partially off the subject....If you've read Breakfast with Pandora, you know that DF can bring anything back to Roman and Greek mythology or culture (It's his field).  And I've been impressed (I've even tried it with a few movies and failed).

But, I realized recently, I tend to bring everything back to music...so here goes.

"The Moon is a Harsh Mistress" is also a song written by Jimmy Webb.  Heinlein's title inspired the song title (although the plot of the song is nothing like that of the book):

The title is from a short story written by Robert A. Heinlein from an anthology called A Man Who Sold the Moon," commented Webb to Paul Zollo in SongTalk. "And I liked the title and it stayed with me for years and years and years and years. It haunted me. And I finally wrote the song. I've hardly ever done that. That's a special case. Taking a title from someone else's work. But I'm very straightforward about it; that's what I did. But it was because it was so hauntingly beautiful."

(Judy Collins responded strongly to the song's downbeat qualities, telling Corby Kummer in an interview included in the booklet to her 1981 Book-of-the-Month Club box set, "In 'The Moon Is a Harsh Mistress' I want you to feel devastated, totally wiped out by the end of a love affair. It's a song to jump out the window by.")(also from the Jimmy Webb album liner notes)

and, the version I heard first and still love, Joan Baez.  Go give it a listen!

I feel the same way about The Da Vinci Code.