Home Archives Profile Subscribe
Changes Over Time (or Not)
HumminGladiola 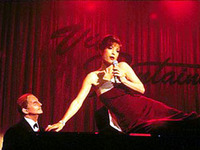 I'm sure that I probably had heard this song before, but the first time I really became aware of it was when it was sung by Nana Visitor on an episode of Star Trek:  Deep Space Nine ("His Way")(Listen to it here - from The Best of Star Trek, Vol. 2).  I was surprised at how well she could sing since I only knew her from DS9, but then I found out that she started out in musicals (Gypsy, My One and Only, and 42nd Street), and later played Roxie in Chicago on Broadway.

"Fever" is a jazzy/bluesy song - the words are interesting, but you have to hear them sung:

You give me fever
when you kiss me
Fever when you hold me tight
Fever
In the morning
Fever all through the night... The version of "Fever" that I know best, however, is the one that Chuck Brown and Eva Cassidy sing on their CD, The Other Side.  My brother-in-law lent us one of Eva Cassidy's CD's a few years ago, and I was amazed that I hadn't heard of her before.  I think we have most of her CD's by now.  She's got a beautiful voice, and can sing all kinds of songs.

I looked up "Fever" on Amazon.com, and found other good versions by Peggy Lee, Shirley Horne, Blue Cat Express, and Bette Midler.

I found Eva while shopping in that cute little store that used to be in the HT shopping center... was it Bayleaf Peddlar? (They sold gifts, candles, etc.) Anyway they were playing one of her cds, can't remember which one, and they had it for sale. I very quickly bought every one I could find.

See, we have even more things in common! :-)