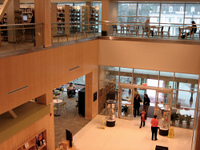 The Cameron Village Library in Raleigh has turned into my favorite library.  We were there today, and, again, I got out more books than I was intending to - and it's something about how the library is designed inside (lobby to the right).

Whereas many libraries are good at warehousing books in an orderly fashion, the Cameron Village library, while having a large collection, is, somehow, much better at displaying them.  I feel like I'm swimming in books there in a way that I don't feel in other libraries. 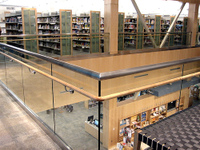 Along with the usual separate shelves of new books and staff recommendations (usually excellent there), there are also various displays in different subjects.  For instance, today there was a display of books, both fiction and non-fiction, on gardens (Elizabeth Lawrence was front and center, of course), a display of Elizabeth I books to go along with their temporary exhibit, beach books, and five or six others that I can't remember.  I like these because they showcase books that I might not notice in the stacks (I usually don't have enough time to browse all the subjects I'd like!)(Non-fiction stacks to the right).  Last time, I found an interesting book on the history of Blowing Rock, NC in a NC display.

Even the regular shelves are easy to browse - the books aren't usually packed in (except for the science fiction*) like they often are in libraries.  And the occasional book is turned face out which also seems to visually open the stacks up (and gives my neck a break from reading titles sideways). My only quibble is, while they have a good section of new fiction books, their section of new non-fiction is much sparser.

I also love how light the building is inside (important for daughter and myself) - those are all south-facing windows on the front.  All of the separate rooms (office, conference) are either in the back or on the sides so the light has a chance to reach most of the inside.  The new shelves are all light wood and the lighting is excellent - giving it all a very open feel even when there are lots of people there.  In the (large!) children's room, the bookshelves and chairs all have little cutout silhouettes of butterflies and beetles on the ends.  It feels very whimsical. 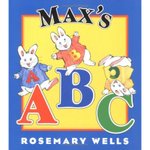 Younger son returned a large pile of books today.  Instead of giving him a number, like I usually do, I told him he could get as many books as he could carry.  I forgot to specify how far!  He could carry his bag about 2 or 3 feet before putting it down again.

We've only started delving into his large selection, but, so far, the best one has been Max's ABC by Rosemary Wells.  Yes, he is past ABC books.  But you're never too old for Max or Rosemary Wells. 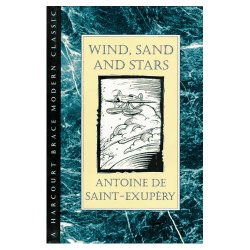 And, some of my most alluring finds are, If Grace is so Amazing, Why Don't We Like It? by Donald McCullough, Eve's Revenge:  Women and a Spirituality of the Body by Lilian Calles Barger, Wind, Sand and Stars by Antoine de Saint-Exupery (of Little Prince fame**), America at the Crossroads:  Democracy, Power and the Neoconservative Legacy by Francis Fukuyama, and Searching for God Knows What by Donald Miller (yes, I was browsing in the faith section).

After the library we went to get a snack at Helios Coffee on Glenwood Ave (which we've been passing for years but have never visited).  We shared a brownie, blondie-type bar (it actually seemed more like a shortbread bar with chocolate chips) and a rich chocolate rasberry cake.  We like to get a few things and all try them.

*They added 50,000 new books when they opened the renovated library so I guess it would be a bit tight somewhere.

** You thought you'd get away without anything musical - didn't you?!  Bob Fosse played the snake in a 1974 film version of The Little Prince.

We wandered into that renovation a few weeks back and absolutely love it. I wowed it to every staff member I saw and they responded with beaming pride, as if it were their personal property. It feels more like a bookstore than a library. Feels almost decadent.