The gardens have changed to their summer bloom. 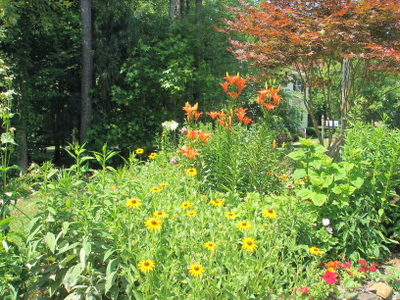 I didn't used to have lilies at all, but I got interested in them about three or four years ago.  Now they're all over the beds.  The black-eyed susans reseed themselves all over also - the ones in front here are volunteers. 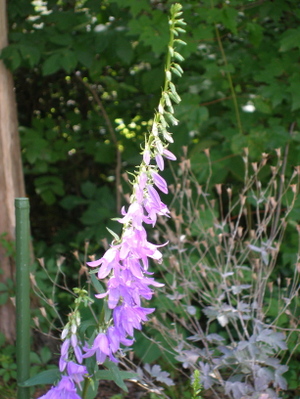 We've had this campanula planted in two places. The first one we had was in the bed pictured above.  It was overwhelmed by the other plants and didn't come back this year.  This campanula, however, in the partially shady backyard, is very happy.  As is the columbine behind it which reseeds profusely. 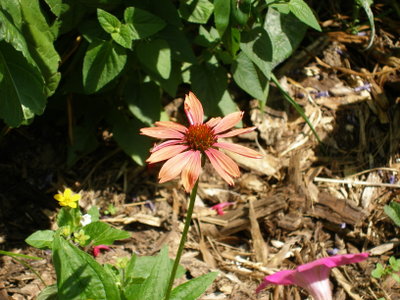 I haven't added many new perennials this spring, but I couldn't resist this red coneflower that I picked up at  Southern States in Carrrboro. 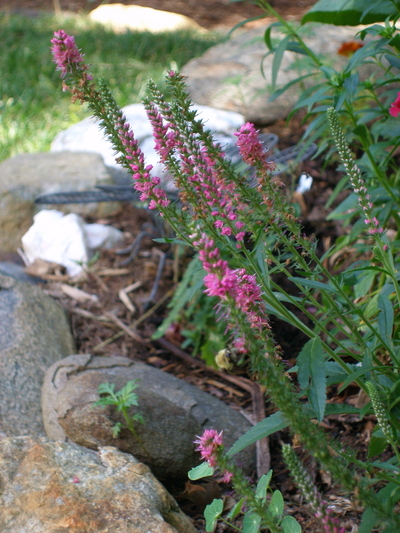 Many years ago I went on a Veronica kick and planted a number of different kinds.  Some survived; some didn't.  This Veronica, "Foxtail," is one of my favorites. 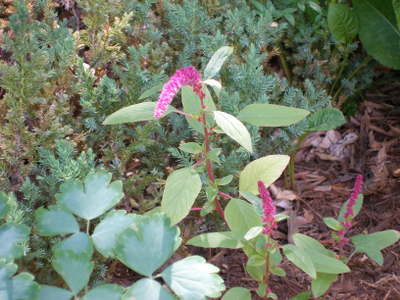 I first bought seeds for Love Lies Bleeding (Amaranthus Caudatus) at the Monticello Garden Shop.  They were grown back in colonial days, and Jefferson had them planted in his garden.  When he was little, older son referred to them as "fuzzy pink elephant trunks." 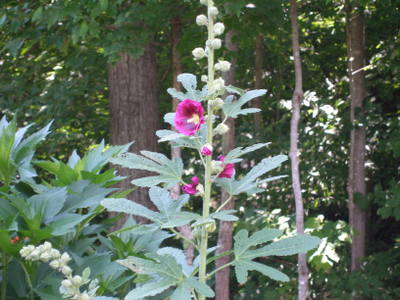 Usually the hollyhock starts blooming around the same time the Japanese beetles arrive.  This year, it beat them by half a week. 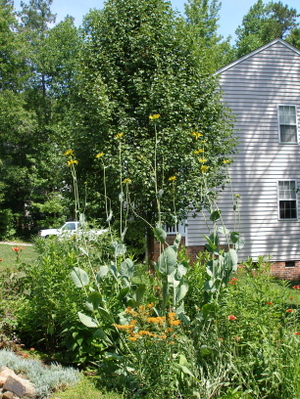 The tall yellow flowers are cabbage leaf coneflower (Rudbeckia maxima).  We bought them from Niche Gardens about eight years ago.  They used to bloom in front of the library, in the bed pictured at the top - which was also the downfall of the Campanula.  Now they're in the bed in the side yard.  I like them for their flowers, but even more so for the seeds.  When they go to seed in the mid-summer, the goldfinches perch on those long stalks to eat the seeds.

Your gardens are beautiful! I thought that they looked a little similar to my own (only with fewer weeds and more flowers), then I realized that you live nearby. I am in west Durham and used to live in Orange County as well. When you mentioned Niche Gardens, I knew you were a neighbor!

Thank you! We had a house (and gardens, of course) in eastern Durham for nine years, and we rented a house about half a mile from 9th street for a few years before that (By the way, I enjoyed the Independent article on Durham a few weeks ago. I got tired of seeing it beaten up in the national news). It's funny how, even though we only moved 20 minutes west, there are things we can grow better in Orange County, and things that we could grow in Durham that we don't have much luck with here (By the way, the weeds are sneaky - they're hiding under the flowers in the cool shade, waiting to take over the world).

Niche Gardens is one of our favorite places!