Home Archives Profile Subscribe
Catching up with the Tarheel Tavern
What Flower Are You? 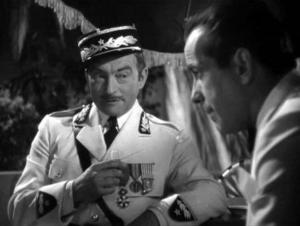 Rick:  How can you close me up? On what grounds?
Captain Renault:  I'm shocked, shocked to find that gambling is going on in here!
[a croupier hands Renault a pile of money]
Croupier:  Your winnings, sir.
Captain Renault:  [sotto voce] Oh, thank you very much.
[aloud]  Everybody out at once!

I read a recent blog post saying that it is difficult to use the word "shocked" anymore because someone will just quote Renault and derail the conversation.

Conrad Veidt, who played Maj. Strasser, was well known in the theatrical community in Germany for his hatred of the Nazis, and in fact was forced to hurriedly escape the country when he found out that the SS had sent a death squad after him because of his anti-Nazi activities.

Many of the actors who played the Nazis were in fact German Jews who had escaped from Nazi Germany.

The influx into Hollywood of large numbers of European exiles fleeing the war helped the casting enormously. In fact, of all the featured players in the film who get screen credit, only three were born in the United States.

In the famous scene where the "Marseillaise" is sung over the German song "Watch on the Rhine", many of the extras had real tears in their eyes; a large number of them were actual refugees from Nazi persecution in Germany and elsewhere in Europe and were overcome by the emotions the scene brought out.

In the 1980s, this film's script was sent to readers at a number of major studios and production companies under its original title, "Everybody Comes To Rick's". Some readers recognized the script but most did not. Many complained that the script was "not good enough" to make a decent movie. Others gave such complaints as "too dated", "too much dialog" and "not enough sex".

The difference in height between Humphrey Bogart and Ingrid Bergman changes throughout the film. This is because Bergman was actually a few inches taller than Bogart, though to create the illusion that it was vice versa, Michael Curtiz had Bogart stand on boxes and sit on pillows in some shots, or had Bergman slouch down (as evident when she sits on the couch in the "franc for your thoughts" scene).