Some things I've been enjoying lately (while trying to relax and get rid of the dizziness and other problems)(and also gardening quite a bit):

Living Fully with Shyness and Social Anxiety - Erika Hilliard:  I used to be extremely shy in school, and I worked very hard in college and afterwards to try and get past that.  I've gone backwards a good bit over the last few years, partly due to stress and partly due to some of the church experiences I've had. I wrote a long and depressing post yesterday titled "Church as Failure" which I'm not going to post.  But I did gain some insight from this book - including the realization that I view my church experiences not just as something in the past, but as a failure on my part.  She explains that you should reframe negative experiences where you feel that you failed socially - rather than "I failed," see it as "I cared enough to try very hard, even if it didn't work out."  In other words - social anxiety and shyness are signs of caring very much and very deeply - rather than not caring at all (which is how some extroverts may see it!).  I'm enjoying this book -especially the sections on relaxation exercises (which I can't usually relate to, but these are very straightforward). 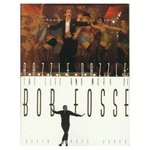 Razzle Dazzle:  The Life and Work of Bob Fosse - Kevin Boyd Grubb: So far, it's been a very interesting exploration of Fosse's life and his creativity.  It focuses more on his relationship and marriage with Gwen Verdon, and also more on his earlier work, than the other Fosse biography I've read - All His Jazz.

Self-Made Man:  One Woman's Journey into Manhood and Back - Norah Vincent:  This is the most unusual of the three.  She's a journalist who disguised herself as a man for eighteen months.  She reports on various aspects of male life - bowling leagues, work, dating, a Robert Bly-style men's retreat groups, and even a monastery.  I'm only a few chapters into it at this point because dear husband ended up reading it first.  Very interesting, but, as he cautions, that the book is very coarse - particularly two chapters where she sees men at their everyday worst.

And a movie.  Last night we watched Only You, a romantic comedy with Marisa Tomei and Robert Downey Jr.  We watched this one years ago, and I'd forgotten all about it.  The main character is, as dear husband puts it, "a ditz," but very sweet and determined.  Marisa Tomei is fun in that role, and Robert Downey Jr. is also excellent as the man who's name is not Damon Bradley, but who still wants to win her heart.  And the scenery will make you want to go to Italy!