I turned the sound up on the computer speaker.  As the heavy metal music blared out, I could hear my older son turn around behind me.  When I turned around, he definitely had a questioning look on his face.  "Toni Sant's Blog describes them as 'similar in style to the most outlandish aspects of acts like Kiss and Alice Cooper.'  They won the Eurovision song contest this year," I explained, "The first time a Finnish group has ever won!"

If you look at Lordi's website, you can see that , with the Halloween makeup and theatrics, they aren't the sort of group that I'd expect to like.  But, I did have a few Kiss and Alice Cooper records many years ago (long gone in a yard sale) - and the song Lordi won for, "Hard Rock Hallelujah," (which you can listen to at Lordi's Myspace page), isn't half bad for heavy metal.  It's got a decent melody (when it's got one), and I'm not paying attention to the words anyway (Though I'm sure that they'd be horrified to hear this opinion from a homeschooling mother/classical musician in her mid-40's!).

The Eurovision Song Contest, doesn't get much notice here.  I wouldn't know anything about it either, except that, while we were visiting relatives in Sweden in 1974, my cousin told me all about the Song Contest and the Swedish group that won that year - ABBA, for "Waterloo."

The Song Contest is hosted by a different nation every year.  Each country chooses and artist and a song to represent them.  The songs are all performed live on the Eurovision network, and viewers call in to vote for the best one (they can't vote for their own country's entry).  The top ten songs in each country get a certain number of points, and the song with the most points wins.  The winning country hosts the Contest the next year (Information from the Wikipedia, which also has a good article on Lordi).

Slate has an interesting article, "America, Meet the Eurovision Song Contest," about this year's Contest in general.  YLE also has a good article, "Eurovision Laulukilpailu" (don't worry, it's in English), about  Lordi and "Hard Rock Hallelujah" (Interestingly, they're originally from Lapland).  And a fugly blog (fugly, I think, is a combination of fashion and ugly), has a very funny post on the Song Contest, "Fugovision Song Contest."  The post prominently features Lordi, including Finland's response (four different versions of "Hard Rock Hallelujah" are on Finland's ITunes top 10):

I absolutely cherish the idea that the Finnish people want the world to see five huge guys dressed up as punk Skeletors and think, "Oh, man, that is so Finland."

The post is definitely worth reading, and it has a great picture of the band accepting their award. 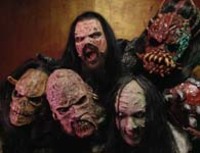 I wasn't going to add a picture to this one, but I couldn't resist.  Their "MySpace" page had the usual banner ad - which, this time, was for a skin cleanser.  The ad read, "So, if you have skin that's itchy, red and dry, you may have eczema..."   And, here's a picture of the group in costume.

It would take a lot of skin cleanser...