The Artful Dodger and the Night Stalker

Although others have been writing about Barney Fife this week, I never had much interest in the Andy Griffith show - even though it takes place in NC, we often see the statue of Andy and Opie at Pullen Park in Raleigh, and we often go through Mayberry… I mean Mount Airy when we go to the mountains.

Two other recent losses this week, however, reminded me of shows that used to be favorites, but that I had long forgotten about.

The first is Jack Wild, who died of cancer at 53 earlier this week. He rocketed to fame in 1968, receiving an Academy Award nomination as the Artful Dodger in the musical Oliver! (At right, with Ron Moody as Fagin) He starred in a few other movies, including Flight of the Doves (which I vaguely remember), but my main memory of him was from watching H.R. Pufnstuf in the late 60’s and early 70’s when I was in elementary school. Then, they switched it to Sunday morning in 1973, thereby depriving me of one of my favorite shows (didn’t they know I’d be in Sunday School?!). 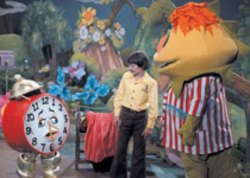 In H.R. Pufnstuf, Jack Wild played a boy marooned on an enchanted island with Pufnstuf, a dragon, and Freddy, a talking flute, for friends. They had to fight Witchipoo, who kept trying to steal Freddy. As you can see by the picture, the show was made in the psychedelic 60’s, and even had a closing theme song sung by Mama Cass (The creators actually had to deny that there were any drug references in the show – not even the magic mushrooms). We went to see the Pufnstuf movie at a drive in -  I’m really impressed that my parents sat through it! For fans, click to listen to the theme or clips from the show.

Unfortunately, Jack Wild’s fame didn’t follow him into adulthood. By the mid-1970’s, he was playing secondary roles, and then only acted intermittently afterwards. He also struggled with alcohol, and, eventually, cancer. A few years ago, he wrote an open letter to Daniel Radcliffe warning him of the dangers of being a teen star (If you do searches on Jack Wild, you will find him featuring on a number of early 1970’s teen magazine covers):

...Yet, 32 years ago, at an age when most youngsters are preparing for their GCSEs, I was suddenly a jet setter, briefly the toast of Hollywood and London's West End. My immature wishes and naive opinions were treated with respect. It was all so flattering and seductive that if you were not careful, you came to believe that you really deserved instant superstar treatment. That was part of my problem. That, and an addictive craving for booze, which was to do me and my family so much harm.

So, at an even earlier age than I was when my life was transformed, Daniel is going to have to cope with the wonderful opportunities as well as the tremendous strains and temptations of stardom. On the one hand, I still remember the sheer excitement of flying first class, seeing New York and Hollywood, meeting world-famous people, and having more than enough money to look after my parents, who were originally mill workers from Manchester. After moving to London, my dad became a laborer and my mum was, for a while, a butcher. They had sacrificed everything to send me to stage school and I wanted to do my best for them.

But I think of the world into which I was catapulted. 'You want booze? You want drugs? You want girls? No problem, Jack. Whatever you want we can fix it.' I can remember going to parties where the 'nibbles' were great bowls of LSD, marijuana, cocaine, uppers and downers. I remember my jaw dropping when I saw for the first time the stunningly sexy young ladies who were hanging on my every word. Suddenly I thought I was Jack The Lad....

So I wish him well and I would not for one moment deny him his wonderful opportunity in the sun. But I hope he can learn from the downs as well as the wonderful ups of my career.

Steer clear of temptations. Keep your feet on the ground. Don't believe all the hype. And, above all, enjoy fame and fortune while they last, for they can be fickle.

He did appear in a few more recent films such as Robin Hood: Prince of Thieves, but he’s most well known for his early work (What must it be like to have your picture on IMDB be one from when you were 15?).

On the other hand, Darren McGavin, who passed away a week ago, had a long line of 173 movie and TV performances, according to IMDB, including playing Mike Hammer (private eye) and guest starring on shows from Alfred Hitchcock Presents, in the mid-1950’s, to the Loveboat to Murphy Brown (didn’t everyone guest star on the Loveboat at some point?).

The show I knew him from was 1974 show, Kolchak: The Night Stalker. He played a newspaper reporter who investigated what seemed to be supernatural occurrences, but he could never convince his editor that he wasn’t imagining things. I don’t generally care for horror now, but I would watch horror occasionally in junior high and high school, and I watched this show regularly for the season it was on. I don’t remember much of the plot, but I remember that I enjoyed it.