I’m an idiot. Or, at least, that’s what X. thinks. When talking to X, I get the feeling that X is just short of speaking to me in words of one syllable. This irritates me. This post is not about X, it’s about the irritation. Why does being considered unintelligent bother me so much?

There are many ways one could insult me, but they don’t bother me nearly as much. Say I’m not pretty? I’m neither stylish nor slim, and I hate clothes shopping. My hair is the wash and wear kind, which I don’t want to bother taking the time to style. But, my husband enjoys the way I look, and that’s really all I care about. 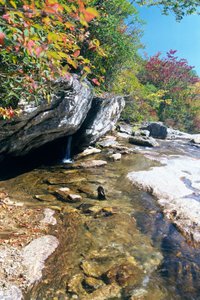 Say I’m not feminine? Ditto. I’m not. I have no interest in style, shopping, crafts, decoration, gossip, etc. I enjoy hiking, camping, gardening, wading in cold mountain streams, general running-around-outside and debate. But, I’m feminine enough for my husband and feminine enough to nurture my children, and, again, that’s what counts.

I’m not athletic? I have no interest in sports, except for watching the Olympics every other year. But I’ve taught aerobics for over twelve years. I’m not athletic, but I’m in shape.

I have no personality? Being a quiet, shy, and polite person, this was one of the ways kids in junior high would tease me. I’ve never been the life of the party, but I wouldn’t want to be. I wouldn’t have the time I do for hiking, camping, gardening, etc. I have enough personality to get along with the people I work with and to have interesting discussions with friends.

I’m not a good mother? Quite frankly, I’d laugh. No, I don’t have the typical mothering style, but I think I do well, even with the lack of punishment and authority for which I’ve been criticized.

But when people assume I’m unintelligent, it bothers me. Why? Part of it goes back to junior high when I had the self-defense of, “Okay, I have no personality, but I’m bright” – which, of course, I would never say because I was too polite (and it would be a great way to make further enemies!). Part of it has to do with a great irritation at a certain male assumption (which is not restricted solely to conservatives or liberals) that women aren’t as intelligent as men.

The part that bothers me most, however, has to do with the questioning part of intelligence. Now, for what it’s worth, I had high test scores (Not that I place much faith in those; see Faith and Standardized Tests) and always did well at school. But for me, that’s not the whole of intelligence. For many people it is.

Largely because of my shyness, I was able to keep this under wraps during my public school years (and, if you’ve read my blog, you know I question schools also). I kept my questioning for friends and family – which meant that discussions and debates with friends and family were often far more interesting than any I had at school. But, by the time I got to graduate school, I was no longer as shy and not able to keep this hidden any longer. Okay, I didn’t even want to. I had gotten fairly good at judging classes; and, being totally honest again, I dropped classes with professors who did not seem to welcome, or at least put up with, questioning (I was lucky in that there were no required classes for this degree, only areas).

Now, for those of you saying that I cut myself off from learning from these professors, maybe so. However, if you look at descriptions of learning styles, my main method of learning is reading – not lectures (which would be rather far down on my list of methods). I could still read the books that those professors would have used, and I did keep the syllabi from their courses and add them to my book list. My other main method of learning and of honing my ideas is discussion and debate. If a professor did not welcome that, the class would be flat for me. I was in graduate school to learn, analyze, and debate, not merely to take notes.

But, people have different ways of dealing with questioning. My favorite professors were the ones who welcomed it, and who could realize that intelligence could be more than just answering the questions the right way. For people who consider intelligence only in the “following-the-rules-the-best” way, who consider intelligence only to be demonstrated by climbing the typical ladder of success the fastest and most impressive way, my kind of intelligence (Or at least my favorite kind since I can follow the rules, though I do get bored) is invisible. The questioning and looking and searching and researching that I love to do, and that I hopefully have passed on to my children, is invisible to them. The one of the largest parts of who I am (even bigger than the musical part which I’ve written so much about) is invisible to them. And that’s why it irritates me so much. It’s not just an insult – it’s like they don’t see me at all or don’t want to see. I don’t exist to them. And, I do find that irritating.

(By the way, the beautiful mountain stream pictured above is in Graveyard Fields, west of Asheville, NC, off of the Blue Ridge Parkway - a wonderful place to hike!)

Wow - except for me not having children, you and I really have a lot in common. This post connected with me on many levels.

Yes, I agree. I have a friend who always thinks outside of the box - in fact that's his skill. I'm not sure he's suited to a 'regular' education, but he certainly is smart. He'll often give you something to think about - often a different perspective. This is just as valuable, if not more so, than the people who can answer questions and follow directions the best.

I think I started to think for myself quite late on really, but I'm so glad I do. It's about the confidence to ask the questions and to be prepared to admit you don't understand something, or that you disagree with it.